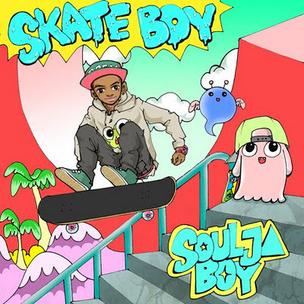 Soulja Boy might be turning into Mike Jones. At least on the basis of “Skate Boy,” where for a chunk of the mixtape’s songs he’s content to babble his way through repetitive phrases in a somewhat slurred, annoying tone. On the brooding opener, “God Forgive Me,” he brags, “I done came out with a hundred racks/ Fucked around got a hundred taxed/ Goons strapped up with a hundred gats/ Put a hundred hoes on a hundred backs.” It sounds ridiculous. But just like Houston rapper Jones’s brief spell in the spotlight, there’s something about the spectacle that pulls you in. It’s not quite a full-on train-wreck rap moment, but the idea of Soulja Boy in 2011 is still something to gawp at – and usually in a briefly entertaining way.

Throughout “Skate Boy,” Soulja Boy shows a talent for reciting risible rap lines with a straight-faced aplomb. On “Louis Vuitton,” which also has him crooning a hook about the designer brand, he decides that, actually, he lives his life in 4D. Elsewhere, he informs how, “You came out of pussy, I came out of water.” (It is unclear whether being Ocean Gang certified is a good or a bad thing at the end of the day, or whether Mrs. Soulja Boy just favored a birth tank.) This all happens over beats that, at their best, balance a low-fi charm with some innovative touches: In particular, “All Gold Everything,” his team-up with Young L, showcases an addictive beat that wobbles and bleeps.

Just like Jones though, Soulja Boy’s quick rise and subsequent plummet has cast him as one of Hip Hop’s popular punching bags. Most listeners will skip through “Skate Boy” while staring at the cover that features a Pac Man ghost in a backwards baseball cap. But despite all the critical flack hailed his way, Soulja Boy is still here. So when he boasts, “2012, my year,” you know he ain’t disappearing any time soon, skateboard or not.