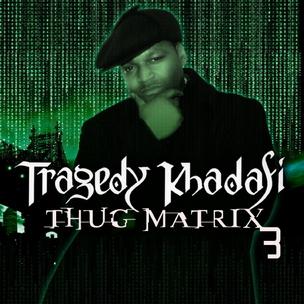 Thug Matrix 3 sees Tragedy Khadafi delivering his first album since 2007’s The Death of Tragedy. After serving close to four years on a drug charge, Tragedy’s Thug Matrix 3 doesn’t just celebrate his freedom but also his 20+ year journey in the recording industry.

While the album is relatively short (with just 10 tracks), it’s packed with dense lyrics. On the araabMUZIK produced “Narcotic Lines”

Tragedy spits, “I state my name my name I state / Never play with this game til I lay in the flame / If you breathe what I breathe then you one in the same.” From a technical point of view, it’s a missed opportunity for a countless number of multisyllabic options. Yet Tragedy delivers it with aggressive passion, making it memorable. Tragedy’s catalog is filled with revolutionary inspired songs, and he continues that trend on Thug Matrix 3. While an artist like Game has been accused of name dropping, Thug Matrix 3 sees Tragedy, dropping lines about Skyping with Fidel Castro on the Ayatollah-produced “Black Prince” and lines about other controversial revolutionists throughout the project. It pinpoints Tragedy Khadafi’s influences and demonstrates just how deeply he is invested in his lyrics.

Khadafi’s revolution-inspired content has always been mixed with incredible depth, but on Thug Matrix 3, there is never a moment that rivals Against All Odd’s haunting “Permanately Scarred” or Still Reportins “Crying On the Inside.”  “Each One, Teach One” is its closest moment, which features Tragedy’s best lyrics and a dope Otis Redding sample. “Pops died early, Moms was on heron / I was raised on the same corners that they fell on” captures the cyclical nature of the projects. It’s these instances that have always separated him from his peers and his current work unfortunately doesn’t provide enough of them.

Much like Tragedy’s QB brethren Cormega, a Khadafi album always features dope production. Solid contributions from Ayatollah, araabMUZIK and Audible Doctor are littered throughout the project, while Now & Laterz also drops off a few gems for Tragedy to bless. In many ways it’s his gift and his curse. The production never falters, so when the album drifts into shaky territory (see “Best of Both Coast”

) the fault goes no further than Tragedy and guests.

It has been 21 years since a young Tragedy dropped a still relevant “Arrest the President.”  It’s clear that The Intelligent Hoodlum has survived the cold QB streets and matured into an artist equipped with conspiracy theories and inspired by revolutionaries. He’s been to hell and back and not even a prison stint in Attica can keep him from grinding forward into the next decade.