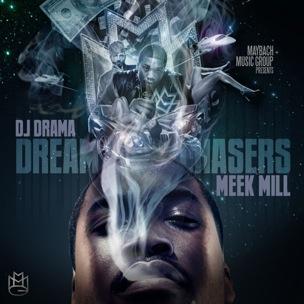 It’s amazing what a major co-sign at the right time can do for your career. Just a few years ago, Philadelphia-native Meek Mill was seeing his potential squandered despite being affiliated with T.I.’s Grand Hustle imprint. Now, the 24-year-old can breathe a bit easier with Rick Ross and Maybach Music Group at his disposal, with Dream Chasers acting as a testament to his newfound drive for success.

It’s evident that much like his mogul overseer, Meek Mill has an ear for insatiable beats that fittingly compliment his lyrical street tales. Whether it’s the bounce of “House Party,”

or the much-praised cut “Ima Boss”

beats crafted by collaborators Tone Beats, All Star and Jahlil Beats make this a mixtape worthy of repeat listens for the production alone. A confident Meek Mill rarely shies away from the lively production, taking every chance he gets to boast while preserving a consistent delivery that shows his maturity on the mic.

In that same vein, the mixtape’s largest detraction becomes Meek Mill’s persistent references to drugs, money and women. Look no further than “Won’t Stop” and “Get Dis Money,” where paper becomes Mill’s main focus. Blinded by the almighty dollar, it’s safe to say one likely could have been omitted to prevent redundancy. His narrative on “Tony Story” finds itself slightly typical and commonplace as revenge in the dope game becomes a motivating factor for the characters in the story. Truth be told, Ricky Rozay’s lyrical repertoire suffered from this same issue which he was able to grow out of. It’s likely that Meek Mill will do the same in the future.

Dream Chasers is an extension of what Meek Mill solidified on Self Made Vol. 1: a young hungry emcee who has found the right supporting cast to push his brand of Rap. The lengthy track list could be a bit cumbersome for listeners just getting into his music, but for the supporters of his Flamerz series, Dream Chasers is a nice addition to his ever growing collection. In any case, Meek Mill should have changed the title of this project, because frankly it seems like his dreams are fast becoming reality.