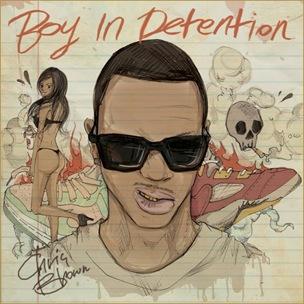 Once a Pop culture darling, the last two years of Chris Brown’s career were spent on the outside looking in. Unable to attend many award shows because of a restraining order and limited on acceptance from some of music’s elite, the Jive Records sensation cried foul, and said he was “black-balled.” With a successful new album, Brown may be using his outcast persona to his advantage. On his aptly-titled mixtape, Boy In Detention, he clearly embraces being Pop music’s black sheep. Surprisingly, he’s got some chops.

From the opener, “First 48,” Chris Brown’s verses are creative, and his flow is impressive: “Y’all can’t get at me like a mention / Indirectly y’all respect me ’cause this boy’s in detention.” He’s hyper aware that some people hate him for his missteps: “And the waitress hate me / Hope she don’t spit in my sandwich.” Boy In Detention lacks any lyrical substance. He raps about what he knows – and what Brown knows is “fame” and fame only. There are no struggles here, just club nights and early mornings.

Unlike his previous studio albums, Boy In Detention is very short on romance. However, Brown is deeply motivated by no-strings attached lust, providing ample sex-inspired jams.  On “Body On Mine” is all about the after-party. He has a tryst with a stripper on “Private Dancer.” Titles like “Leave The Club” and “Your Body” are pretty self-explanatory. And after all the club loving, it’s obvious that he would pay a visit to that overcrowded “Marvin’s Room.”

Boy In Detention is not short on star power either. He recruits 9th Wonder to produce the mixtape’s “Real Hip Hop Shit”

track series. He boasts some more bedroom bravado on “Freaky I’m Iz,” alongside Kevin McCall, Diesel, and Swizz Beatz. Justin Bieber’s flow on “Ladies Love Me,” produced by David Banner, shouldn’t be surprising, considering he already worked with Raekwon and Kanye West: “Swagging with a Crooked tee / Body slam the beat from DB / Call me Booker Tee / I said whoa there, whoa there baby…” proves that while Biebs conquered Pop, Hip Hop will remain a challenge.

Just when Brown chases his female audience away with all of his bad behavior, he sprinkles in the adorably female-friendly track “Sweetheart.” The island flow will surely keep Team Breezy gushing with delight. The mixtape closes with “Yoko”

, featuring Berner, Wiz Khalifa and Big K.R.I.T. And Chris holds his own alongside two of the more celebrated current emcees.

It seems like rappers want to be singers, singers want to be rappers, and the rest want to be actors. On Boy In Detention, Chris Brown takes a stab at being a triple threat. Lack of content aside, it turns out that he’s not half bad at all three.

Listen to Boy In Detention by Chris Brown