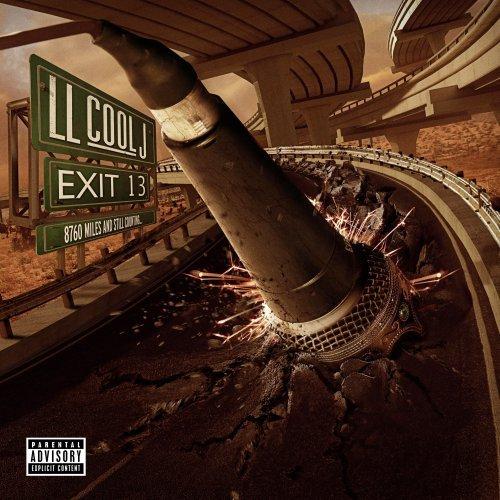 LL Cool J is easily recognizable as one of the living legends in Hip Hop. Subsequently, many of Hip Hop’s baby boomers (born in the 90’s) recognize LL for his chiseled abs rather than his razor sharp lyricism. It’s no secret that, over the past decade, LL Cool J hasn’t been the mic manipulator that needed his radio or wanted to knock you out because mama said. Rather, Todd Smith has been more concerned with getting female fans “Headsprung” while explaining how he can love them better.

It’s an awkward question but why would a legend in Hip Hop constantly feel like he has something to prove? Apparently, this is a question that only LL has the answer to. And for his swan song on Def Jam, Todd Smith has crafted Exit 13 as his response to those who have doubted his skills. But do we get the Kangol rocking microphone master who proclaimed how bad he was? Or do we get another dosage of the buffed out sex symbol who wants to preserve his sexy? Unfortunately, it’s the latter.

The readily radio digestible treat “Baby” works LL‘s poppy vibe with some help from The Dream. Unfortunately for Uncle L, he resembles a dirty old man with lines like “I’m really not sure if her breasts are fake/ cause with whipped cream on them and they taste just like cake.” At this point in his career, Uncle L has really become Hip Hop’s honorary uncle and its rather absurd how raunchy he has become with his lyrics – especially at his age. “American Girl” finds LL lamenting about some good ol’ American women over a marching band influenced production. It’s an absolute car accident waiting to happen and when L asks to see boobs on the dollar bill over a travesty of a beat, it is evident that overt manliness has come full circle. Not even 50 Cent can save Cool James from his own mess. “Heartbeat” ends up being another souped up sex machine that has run out of gas.

The production on Exit 13 is relatively abysmal. The rock remix of “Baby” is absolutely atrocious and could possibly be the worst thing LL Cool J has ever attached his name to – seriously.  When LL looks to become a bad ass again, the production reduces his bark to more of a whimper. The title track finds LL trying to be a menace on the mic but the production puts the brakes on any momentum that he could have gained.

LL‘s feeble attempts at “taking it back” seem more “old soul falling from grace” rather than “king coming to reclaim his throne.” The Marley Marl produced “You Better Watch Me” finds LL getting aggressive with his flow but both he and Marley Marl come off sounding like that uncle who shows up to the party trying to cut a rug but can only do the butterfly.

“Mr President” is a noble effort finding LL crafting a letter to the President but the flow is just unbearable. Again, the effort is noble but not all positive messages make good songs. This is an example of when keeping it positive goes wrong.

All is not lost on Exit 13 however. “Cry” is powered by Lil Mo‘s crooning over a throbbing production courtesy of Raw Uncut. LL is back to his old tricks as his lyrics are again female oriented. But this time they are devoid of hyper sexual references and actually work out.  “Ringtone Murder”  may be LL at his best on Exit 13. Powered by a sinister synthesizer creeping across smattering drums, LL finds his old form and wrecks shop while Grandmaster Caz sets up each verse. But these moments are far and few in between and cannot distract the listener from the wretchedness of Exit 13.

When LL closes the album out with “Dear Hip Hop” – which includes a lame duck thinly veiled jab at Jay-Z –  you can feel where the legend is coming from but you find his message of saving Hip Hop to be hypocritical considering what you just endured. Each verse is laced with poignant insight but for every line that tries to uplift Hip Hop out of the gutter, Uncle L has a song that contradicts everything he just mentioned.

Each and every time LL has delivered an album since 14 Shots to the Dome, fans have had to bear witness to a legend with deteriorating skills. It’s about as painful as watching Mike Tyson continue to take fights knowing good and damn well that his time has passed. At one time, LL Cool J was revered as the G.O.A.T. He will always be remembered for classic battles and songs like “Jingling Baby,” “Big Ol Butt,” “Boomin System,” and “Rock The Bells.” But to those who are just familiarizing themselves with Uncle L, all they will get is an old man who is better off hanging the mic up and doing more Old Spice commercials.