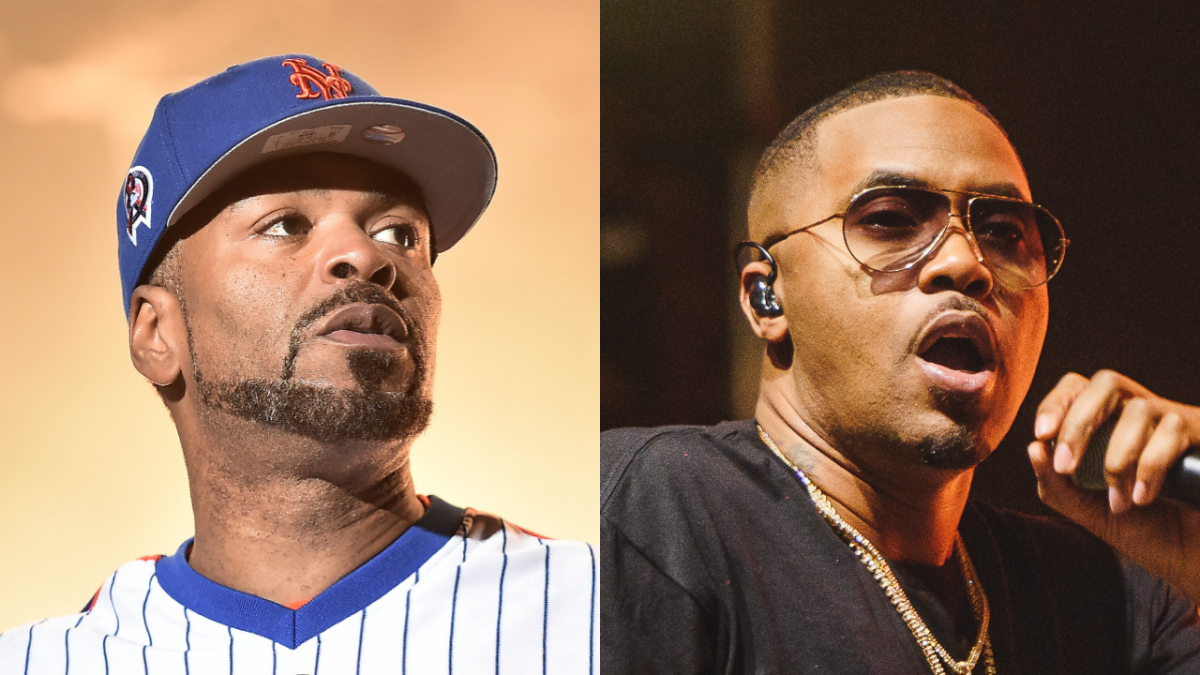 Aside from being a legend in his own right, Method Man holds the unique distinction of being the sole guest artist on The Notorious B.I.G.’s 1995 debut Ready to Die. Brimming with sneering rhymes and back-and-forth chemistry, “The What” finds the pair running a two-man weave over dank, dusty production from Easy Mo Bee.

But listen close enough and one can hear the DNA of another New York rap legend. During a recent appearance on Math Hoffa’s My Expert Opinion podcast, Method Man copped to biting Nas on the collaboration.

“By the time I got [to the studio], Biggie’s verse was written and he told me that he wanted to end it with, ‘You can’t mess with M-E’ and I was supposed to go, ‘T-H-O-D,'” he recalled. “But I overlapped him because it didn’t fall on beat doing it that way. That’s where the ‘T-H-O-D Man, here I am/I’ll be damned if this ain’t some shit.’

“I wrote that shit quick as fuck. Who was I biting there? Whose flow was I [biting]? Nas. That’s biting Nas’ flow. ‘I’ll be damned if this ain’t some shit/Come to spread the butter lyrics over hominy grits… Coming where you rest at, surrender/Step inside the ring, you’s the number one contender/Looking cold-booty like your pussy in December.'”

The Wu-Tang Clan member admitted to also borrowing from fellow New Yorkers M.O.P. “I got that from M.O.P. ‘Actin’ as if it can’t happen,'” he said. “[Lil] Fame was like, ‘I’ll make it happen!’ I loved them n-ggas from day one. ‘How About Some Hardcore’? I was like, ‘Them n-ggas is it!'”

Method Man delved deeper into the studio session that birthed “The What,” recalling how Biggie would “snap” on Diddy (and anyone else who was in the room) relentlessly.

“Tracy [Waples] came and picked me up from my crib, 66 Benjamin Drive,” he remembered. “I can’t remember where the fucking studio was, but I remember it was couches and shit in there. Easy Mo Bee was there, Puffy was there, there was a little dining table where you could eat at and Big was there.

“We both sat there and wrote our rhymes. It was a lot of snapping going on; Big used to snap on Puff all the fucking time, but Big snapped on everybody. Lil Cease used to get it, too. Them n-ggas had jokes, man. Funny, funny, funny n-ggas.”

Method Man’s affinity for Biggie wasn’t shared by all of his Wu-Tang brethren, though. On Raekwon’s Only Built 4 Cuban Linx… skit “Shark N-ggas (Biters),” Ghostface Killah famously accused the Bad Boy MC of biting Nas’ Illmatic with his Ready to Die cover.

The track created tension between Wu-Tang and Biggie, resulting in Biggie confronting Nas about his relationship with the Staten Island crew (Nas appeared on the Only Built 4 Cuban Linx… cut “Verbal Intercourse”).

“Big called me and he’s like, ‘Yo, you fucking with them Wu n-ggas? You knew they said that shit?,'” Nas recalled on Drink Champs in 2019. “I was like, ‘Yo, I mean, that’s Ghost. Ghostface is Ghostface. There’s no love lost. I didn’t know he was going to say this shit.’

Method Man, Biggie and Nas were even supposed to record a collaboration together called “The Ugliest,” which was intended for Busta Rhymes’ 1996 debut The Coming and was produced by a then-up-and-coming J Dilla. However, their schedules failed to line up and the song was ultimately shelved due to Biggie subliminally dissing 2Pac in his verse.

“He never said 2Pac’s name in the song if you listen to it,” Lil Cease told The Art of Dialogue while reflecting on the song earlier this year. “He said one line. He said, ‘And the winner is/Not that thinner kid/Bandanas, tattoos/My fist never bruised/Land still cruise, Frank White paid his dues.’ So he said that line where, if you was thinking about it, you would know who he’s talking about, but he never said 2Pac’s name.”