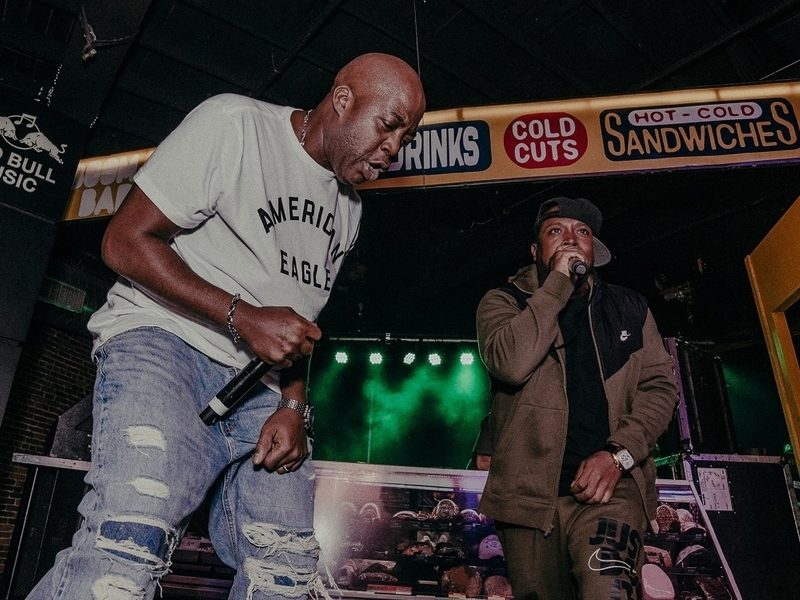 M.O.P. Tell The Story Behind Unlikely Collaboration With LFO

For those that can remember back to 2001, it was definitely the era of the boy band. Groups like The Backstreet Boys, NSYNC and 98 Degrees were burning up the charts and filling up stadiums.

Around that time, a group called LFO (Lyte Funkie Ones) hopped on that wave and hit big with their smash single “Summer Girls.” They were like the other aforementioned pop groups but even more mellow.

Words like “pop” and “mellow” have likely never been used to describe Brooklyn’s high voltage duo of Billy Danze and Lil Fame, collectively known as Mash Out Posse or M.O.P. So when the two sides teamed up for the song “Life Is Good” from LFO’s 2001 album of the same name, it turned heads. Some people were even wondering if was a different group with the initials M.O.P.

HipHopDX caught up with Danze and Fame, who were performing at Red Bull Music Presents The Boom Bap in Nashville, Tennessee along with the venerable DJ Premier, as well as their longtime producer/manager Laze E Laze prior to LFO singer Devin Lima’s death. In a conversation after the show, the duo revealed the story behind one of the unlikeliest collaborations in Hip Hop.

“I love that fucking record,” Fame noted. “I can’t remember the story ’cause I used to smoke a lot of marijuana.”

Luckily, a much more sober-at-the-time Laze remembered exactly how it went down and it was even more random than it seems on the surface.

“I didn’t even know the group,” he said with a laugh. “I just heard the beat and was like, ‘This shit is hot. Let’s do this shit.’ I didn’t give a fuck about the group. And [Danze and Fame] were like, ‘Yo, we’re gonna do this,’”

The song was apparently a surprise to the industry just like it was for the general public. Laze received a call from one of his fellow executives when the song was released.

“Puffy called me and was like, ‘Why’d you do a record with LFO?’” Laze recalled. “I said, ‘I don’t know who the fuck LFO is motherfucker. We was drunk. We just liked the beat. We didn’t give a fuck about LFO, but we liked the beat.’”

The collaboration was so shocking due to M.O.P.’s style, which could be best described as the perfect soundtrack to a fight due its aggresssion.

When Onyx exploded onto the scene in 1993, they were known by many as the first Hip Hop group that screamed like a heavy metal band and inspired mosh pits at their shows with songs like “Slam” and “Throw Ya Gunz.”

Onyx are often considered the pioneers of the style, and it makes sense considering M.O.P.’s mainstream success didn’t hit until years later. But according to Laze, who was around both at the time, it was actually Danze and Fame who were inspiring Onyx.

“I took Onyx on their first tour and actually, I’ma be honest with you,” he said. “I’ma give you some history here. I used to blast ‘How About Some Hardcore’ on the first tour Onyx went on, so to be perfectly honest with you, Onyx used to be influenced by M.O.P. Fredro [Starr’s] my brother and Sticky Fingaz is my brother and they’ll tell you they were influenced by M.O.P.’s sound more than vice versa because M.O.P. didn’t know who Onyx was.”

Danze added, “We came up in an era of music where it was cool to be different. You couldn’t follow what someone else did because it’s called biting, so you don’t wanna do what someone else is doing. So, it was just the way we grew up and the frustrations from all the turns that we took in our life. Fame raps his ass off, but we’re really not rappers. We’re just fucking amazing at [rap].”

The aforementioned concert’s co-headliner, DJ Premier, also happens to be a part of some of M.O.P.’s biggest songs, including “Follow Instructions” and “Half and Half.” Fame, who produces under the name Fizzy Womack, recalled meeting Preemo and how he was influenced by the Gang Starr beatsmith.

“Let me tell you just being in the studio for the first time with Premier man, I was a big fan,” he said. “I’m a fan of all kinds of music, but Premier was an underdog when we was coming up and I used to tell [Danze] ‘That’s that nigga.’

Since they’ve been in the game, not many artists have really been compared to M.O.P. — a testament to how unique their brand of music is. However, the controversial Tekashi 6ix9ine has recently garnered significant attention for his sound, which bears a striking resemblance to Danze and Fame’s aggressive style. But as Laze tells it, M.O.P. will forever be in a class by themselves and in fact should be credited for sparking a movement that has been immortalized in Hip Hop.

“Billy Danze invented crunk,” Laze claimed. “He walks and thinks and breathes it. All this trap shit comes from Billy Danze. It’s his. They don’t even know it. That’s how he lives. M.O.P. is their own bodega. Their own store of music. There’s nothing ever gonna be like M.O.P. It’s only gonna be M.O.P.