With a record breaking 74,635 on hand at the Citrus Bowl in Florida, the sports entertainment extravaganza known as Wrestlemania XXIV took place. HipHopDX was ringside to witness the festivities first hand as a heavy Hip Hop influence found its way into the sport of professional wrestling.

With the world patiently awaiting the high profile matchup between pound for pound boxing king Floyd “Money” Mayweather and the 7ft giant known as The Big Show, a series of entertaining matches took place in front of the thousands in attendance and the millions watching on Pay-Per-View.

John Legend kicked off the festivities by singing “America The Beautiful” in front of the sellout crowd and Hip Hop’s influence would manage to find its way into the evening. 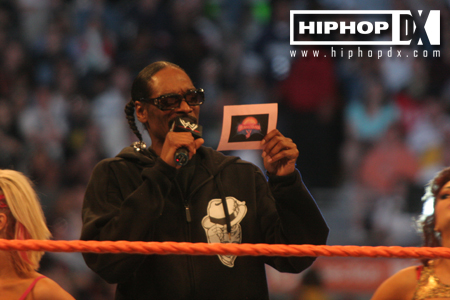 Snoop Dogg would be the Master of Ceremonies for the “Bunnymania Lumberjack Match” that found Beth Phoenix and Melina defeating Playboy cover girls Maria and Ashley. But it would be Snoop who would get the last laugh as Maria’s ex boyfriend, Santino Marella, would find himself on the receiving end of a clothesline delivered by the Doggfather after the match ended. Never one to leave the ladies hanging, Snoop then proceeded to deliver lip service to Maria as the crowd roared in appreciation. 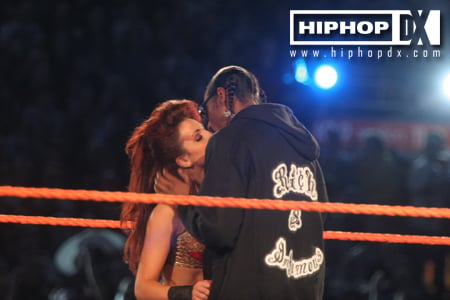 In a match that had the entire sports world curious, Floyd “Money” Mayweather found himself toe to toe with The Big Show in a match that would be decided by KO, pin fall or submission. Mayweather began the match forcing the gigantic challenger to chase him around the ring. It wouldn’t last long however as Big Show finally caught up to Mayweather and pummeled the 5’8”, 140lbs boxing champion. Mayweather’s posse also caught a beatdown as Show pounded through his entourage. After one of his handlers dragged the best boxer in the world from the ring, it seemed as if Team Mayweather would toss in the towel and head for the showers. Big Show cut them off before they could make it backstage and continued his assault on his smaller opponent. Show would wrap his hands around the tiny neck of the pint sized challenger but found himself on the receiving end of a swift kick below the belt by the champion. Mayweather would then wield a steel chair across the dome of the super sized Show and would finally finish him off with a brass knuckle assisted blow to the jaw. The referee counted Show out and thus made Mayweather victorious. 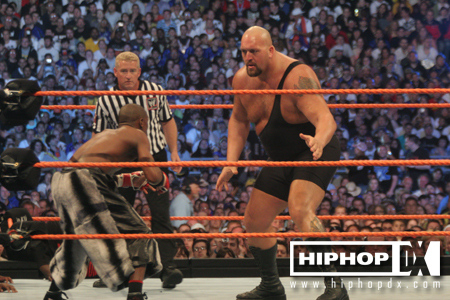 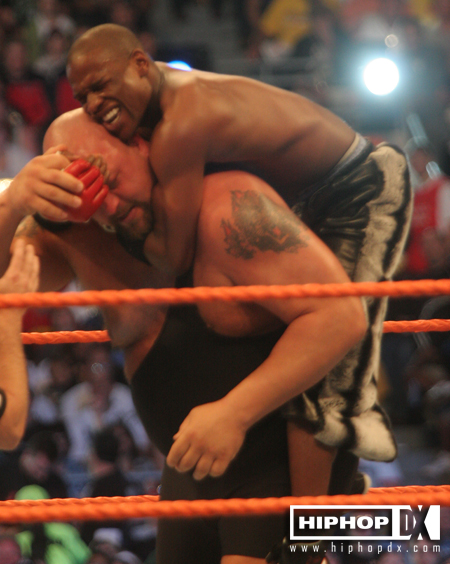 – The legendary “Nature Boy” Ric Flair would see his career that spanned three decades come to a close at the hands of “The Heartbreak Kid” Shawn Michaels. The 60+ year old icon of sports entertainment bid a tearful farewell to wrestling fans across the globe. 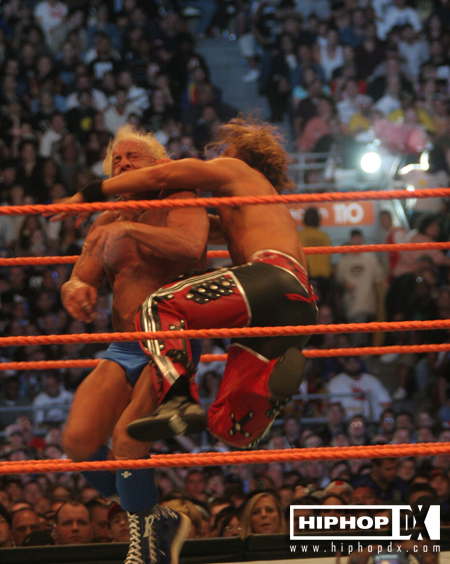 – After Kim Kardashian introduced the innovative “Money in the Bank” ladder match, CM Punk would go on to fend off six other WWE superstars en route to claiming a shot at the championship of his choice. The six other wrestlers including Shelton Benjamin, MVP, John Morrison, Mr Kennedy, Chris Jericho and Carlito showcased a number of death defying moves as the match saw the surprising return of Matt Hardy. 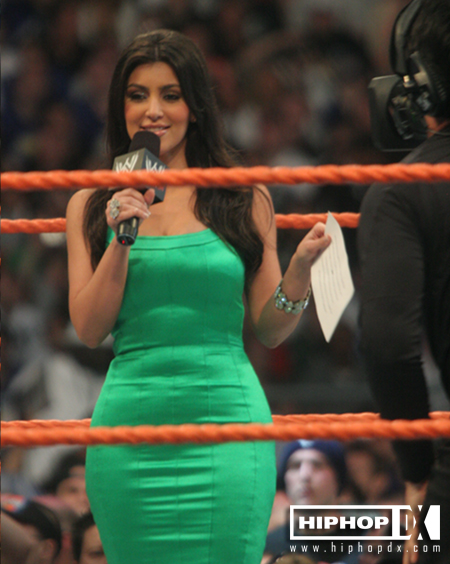 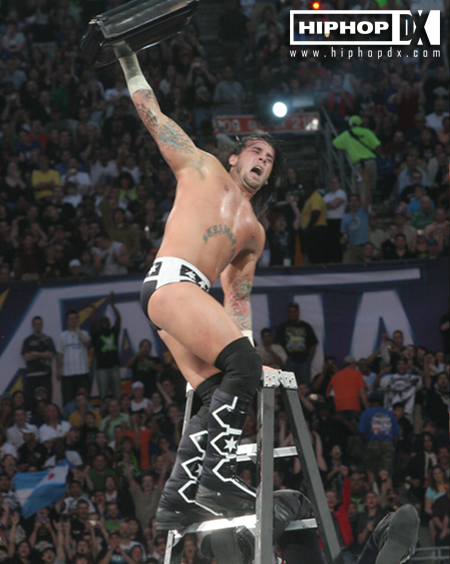 – Batista brought supremacy to the “Smackdown” brand as he defeated “Raw” brand’s Umaga in a “Smackdown” vs “Raw” matchup. 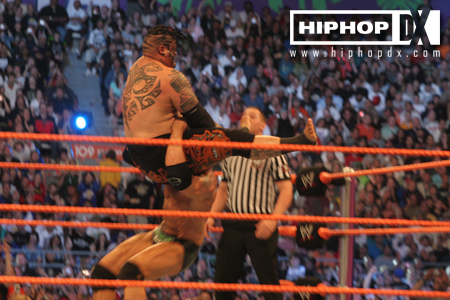 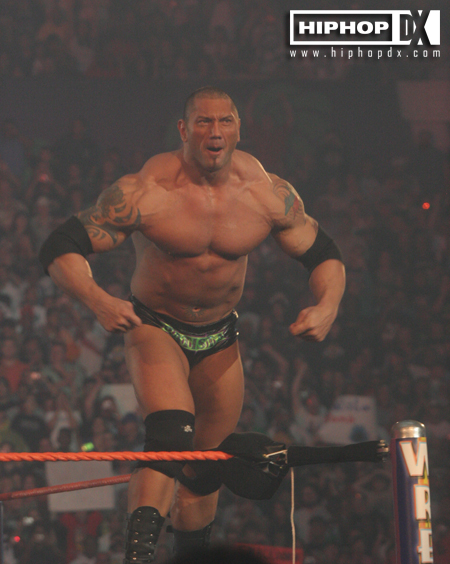 – John Bradshaw Layfield laid the lumber on Finlay and would topple the Irishman in a no-holds-barred match known as The Belfast Brawl.

– John Cena and Triple H couldn’t pry the WWE title from the grips of “The Legend Killer” Randy Orton in a thrilling three way match. While many of the fans thought the belt would find itself around the waist of either Cena or Triple H, it would be the dark horse champion who would take advantage of a Triple H pedigree on John Cena by kicking The Game in the skull and falling on the vulnerable Cena for the three count. 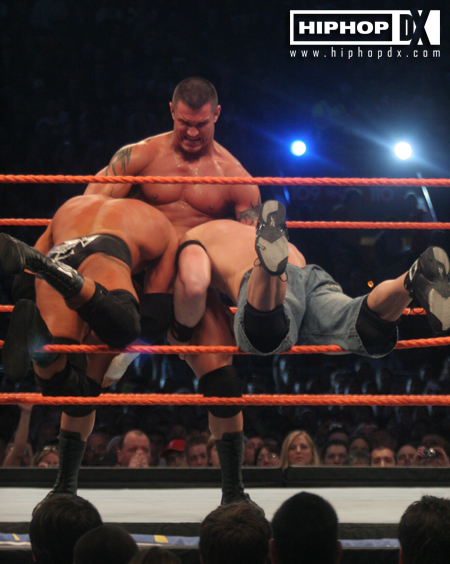 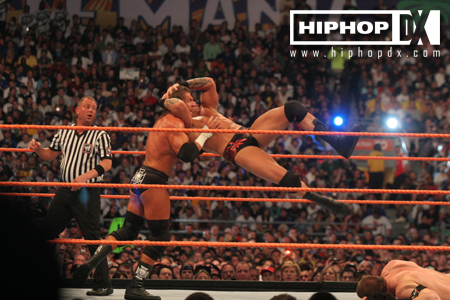 – The 15-0 undefeated Wrestlemania winning streak of The Undertaker moved to 16-0 as the dead man forced champion Edge to tap out and claimed the World Heavyweight Championship. A constant ebb and flow in the evening’s main event reached a pinnacle when Edge continuously countered The Undertaker‘s assault and seemed to have just enough to end Taker’s impressive streak. After near falls by both combatants, Edge landed a second spear on Undertaker but found himself locked in Taker’s mysterious chokehold. A few flailing attempts later and Edge succumbed to the legend of The Undertaker. 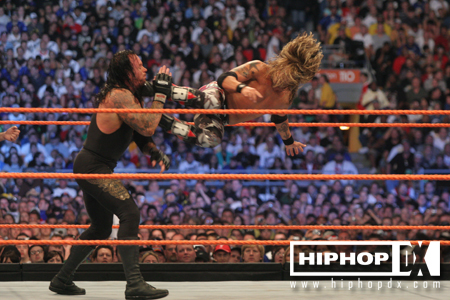 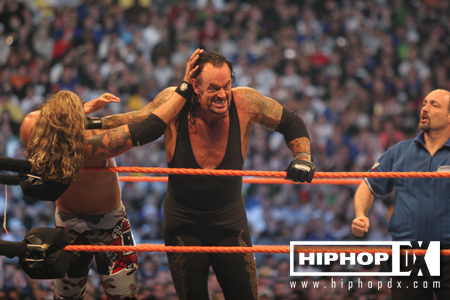 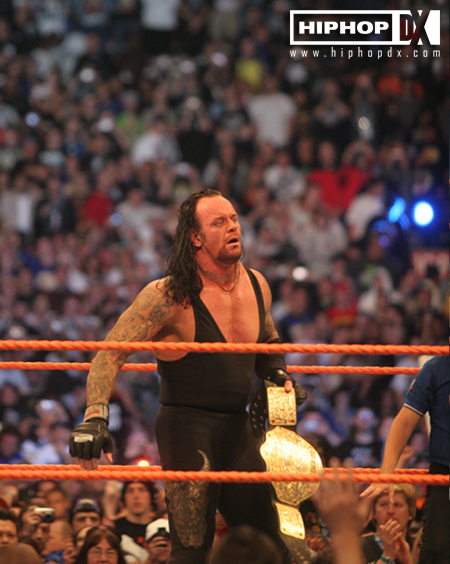 Next year’s Wrestlemania – which will also be the 25th anniversary of the event – will take place at Reliant Stadium in Houston, TX.