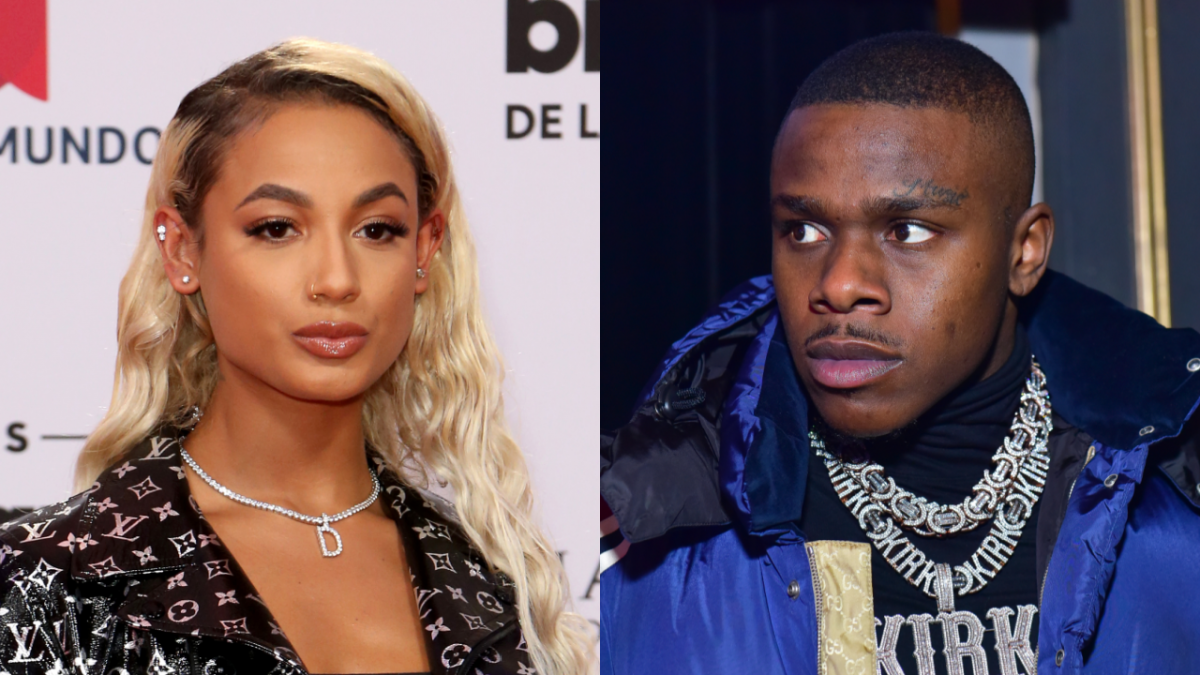 DaBaby and DaniLeigh‘s relationship drama played out on social media on Sunday night (November 14), resulting in the police being called to DaBaby’s home.

Just days after the singer and model supported the North Carolina rapper’s new Back On My Baby Jesus Shit Again EP, a fight erupted between the on-again, off-again couple, in which DaBaby apparently kicked DaniLeigh and their three-month-old daughter out of his home.

The dispute became public when DaBaby somehow got possession of DaniLeigh’s phone and recorded her on Instagram Live during a heated argument. In the video, she can be seen feeding their newborn baby in bed as the pair exchange insults.

DaBaby can be heard calling DaniLeigh “cuckoo” while Dani calls Baby “a fucking coward” and tries to reach for the phone.

Shortly after the Instagram Live broadcast, DaBaby issued a statement on his Instagram Story explaining he recorded DaniLeigh to protect his “safety” and “reputation” while accusing her of making “multiple threats of setting up [an] internet scheme” and “refusing to not let me go me.”

He also claimed he has “been beat on and yelled at” by the “Easy” star during their tumultuous relationship, which they broke off in February. However, he clarified that he doesn’t intend to press charges and called the police simply to have her removed from his home peacefully.

Looking to avoid another Rolling Loud controversy, DaBaby wrote, “My team will be in contact with any and everybody we’re in business with who [may] need clarification.”

DaBaby’s statement didn’t sit well with DaniLeigh, who posted her own Instagram Story message sharing her side of the story.

She claimed the argument stemmed from her ordering Plan B — a morning-after pill — to DaBaby’s home due to the couple not using protection during sex.

That lead to the 29-year-old rapper allegedly ordering her and their daughter to leave his crib, where they’ve been living since the baby’s birth in August.

“This all goes to say that this man is a fucking coward !!!!!” she wrote. “Fuck u Baby!!! And damn I really shoulda jus listened to the cap ass internet about this man!!! … And Im sorry to my baby that her father is kicking her out her home at 3 months.”

DaniLeigh later jumped on Instagram Live to further address DaBaby’s statement, accusing him of being a negligent father despite saying he “still got a queen to raise.”

“Of course it escalated and he want to put up a statement talking about, ‘Oh, it saddens me that I have a queen to raise,'” she said. “Fuck you! You ain’t even been here this whole time that I’ve had this child.”

In one clip, DaniLeigh can be seen being escorted out of DaBaby’s home by police officers.

In a separate Instagram Story, DaniLeigh wrote, “Ladies. Never let a man do u like this.. I pray my daughter never gotta go thru some like this with whoever she ends up with!!! This man left me when I was pregnant… Of course I wanted my baby to know her dad, but wow…. Jus so he can do his hoe ass now, after three months.

DaBaby responded on his Instagram Stories by insinuating DaniLeigh is crazy, comparing her to Lynn Whitfield’s character from the 1996 Martin Lawrence film A Thin Line Between Love and Hate “mixed” with Allison Williams’s role in 2017’s Get Out.

He also posted a short video addressing the situation, saying, “This is some real deal Hollywood shit… But it’s all good, y’all just don’t be fooled, don’t be distracted. Don’t be fooled, man.”

Things didn’t end there. DaniLeigh later returned to Instagram Live, in which she broke down over the situation while defending herself from assumptions about her character.

“I just feel like it’s so unfair this situation, because this whole time I’ve been nothing but straight with this man. I’ve tried, tried, tried. Nothing but genuine, pure love for this man from the jump,” she said while crying. “I tried to make it work for my baby … but this ain’t the best situation at all, bro. I deserve so much better.”

She added, “He’s ok with having five, six baby mothers. Like, nah. I was brought up different.”

DaniLeigh continued to put DaBaby on blast as she slammed him for shamelessly peddling his new Back On My Baby Jesus Shit Again EP, which dropped last Friday (November 12), and upcoming Live Show Killa Tour in his original statement.

“Lame ass using this situation to promote his EP/tour… Literally putting the date on his ‘statement’ my God .. My poor baby got a lameeeeee for a father damn,” she wrote in a separate Instagram Story.

She also claimed two songs from the EP, “Sticked Up” and “Levels,” are about her. “Everyone go enjoy the show ! And listen to ‘Sticked Up / Levels’ which was written about me. Since I’m the crazy one in this ‘love affair.'”

DaniLeigh also had words for another of DaBaby’s baby mothers, MeMe, who posted a video on Instagram appearing to address the unfolding drama between her and the Blame It On Baby hitmaker.

“Lame ass bitch ain’t even met me in person but always wanna talk on the internet ! You know where I’m at love !!!” Dani commented under a post of MeMe’s video, which borrows lyrics from Yung Miami’s “Rap Freaks.”

MeMe clapped back, “LMFAOOO, you done playing victim now? Girl don’t play yourself ..You knowin exactly what it is w. Me … Make me drop receipts from them messages & emails you’ve sent. And nah I don’t, what hotel you going too?”

DaniLeigh later took the spat to her Instagram Stories, writing, “Why every time I’m viral this girl wanna post about me???!!!! U know where tf I am!!! I have reached out to u to be cordial plenty of times!!! No one stole ‘your man’ cause he wasn’t yours ! Watch his interviews, shit watch yours !!!

“You so mf tight that I’m with him u can’t wait til I leave so he can fuck on u and the rest of these Charlotte hoes ! U jus one of them !! Like he’s told me!! Stop using my name for clout so u can post ur period panties and if u wanna speak on me – link me.”

The final word in this messy saga (as of press time) came in the early hours of Monday morning (November 15) when DaniLeigh posted a photo of her holding the Plan B emergency contraceptive that she claims kickstarted the entire argument.

DaBaby has yet to respond.

Below you can listen to our DX Daily Podcast (a daily Hip Hop News Podcast) hosts react to the situation and break it down. If you don’t have time right now but want to check it out later, here is a link to subscribe on the platform of your choice.