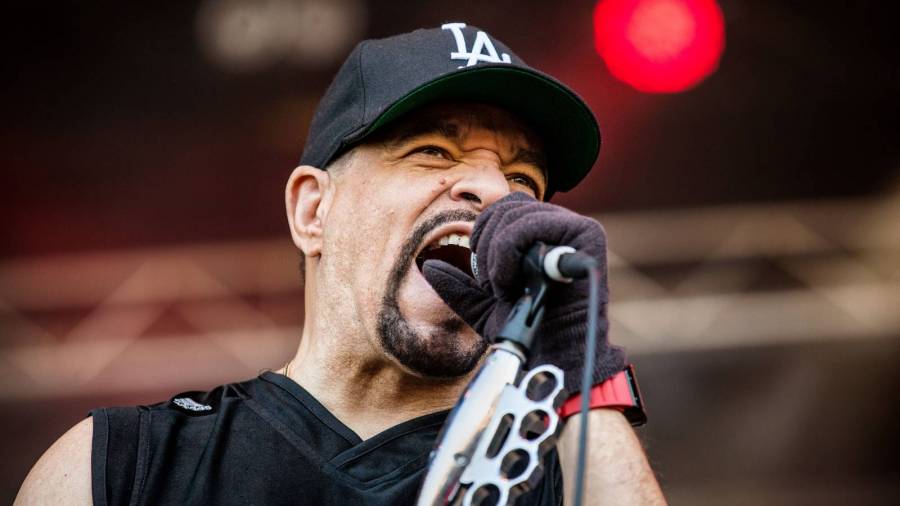 Ice-T is currently holed up at his Arizona sanctuary with his wife Coco and 5-year-old daughter Chanel after wrapping up the 22nd season of Law & Order: SVU,  the longest running show in television history. But there’s a sense the 63-year-old Hip Hop legend/actor is restless and anxious to get started on his next venture — or, better yet, ventures.

“There’s usually consistently about maybe 10 projects I’m working on spanned across a bunch of different things,” Ice-T tells HipHopDX in a recent interview. “So they all kind of have their own life. Some of them win, some of them don’t. It’s like I plant seeds and see what happens and then next year, I reevaluate what I should push forward and what I should let go. That’s kind of how I’ve been doing it for years and years and years. The year usually starts when Law and Order starts. Right now, I’m in that limbo stage of hiatus.”

But that won’t last long. Ice-T will begin filming Season 23 of Law & Order at the end of July and likely hit the road for various spot dates as the concert industry continues to slowly awake from its coronavirus-induced hibernation. He’s also hard at work on a new Body Count album called Merciless, the follow-up to 2020’s Grammy Award-winning Carnivore. The hardcore metal band’s previous album — 2017’s Bloodlust — was nominated for “Black Hoodie” but lost to Mastodon.

“How about that?” he says. “So imagine, you got a band who got their hottest album and weren’t able to perform. We had been nominated the year before and this one, we got nominated for ‘Bum-Rush.’ And the band suffers differently than me because out of the band I have a day job. I’ve got all these other projects going on. Those guys are just musicians. So when you take away a summer tour from them, that’s their yearly pay.

“We were set up to go do 30 festivals all over Europe and it got shut down. We had a show in New York City, we had one in L.A. then one by one, they just started shutting down. Everybody kind of went through a zone — and not to mention the people we lost. COVID hit us pretty hard. It was a real wake-up for humanity to say, ‘Yo, this shit is very fragile.'”

Despite being unable to perform, Ice-T leveled up in a myriad of ways since the COVID-19 pandemic kicked off — most notably, endorsement deals. Anyone who’s seen a recent Tide commercial will recognize the Original Gangster answering phones alongside pro wrestler Stone Cold Steve Austin and Vanilla Ice for the “Cold Callers” campaign. But as Ice-T explains, he’s making more money doing endorsements than music these days.

“Rap is not my first hustle at this point,” he says. “We titled the new album The Last OG. We already had a title for it. I even had an album cover and everything, but it just hasn’t lined up yet. Maybe this year, who knows? The first hustle is SVU. That’s what’s bringing in most of the bacon. The second hustle now would have to be all the random endorsements I have — whether it’s CarShield, whether it’s Tide, whether it’s GEICO.

Considering Ice-T is the mastermind behind the controversial 1992 single “Cop Killer,” getting a gig in a television commercial wasn’t exactly easy. But after seeing what “Deep Cover (187)” rapper Snoop Dogg was able to do with Tostitos, General Insurance and the plethora of other companies, he was undeterred.

“It was difficult because I’m the cop killer,” he says matter-of-factly. “Everybody in the mainstream was like, ‘They won’t fuck with you because you’re too taboo.’ And I was like, ‘Right.’ And then Snoop started knocking down walls. That’s my brother. So Snoop was going through doors and I’m like, ‘Look, Snoop’s making it through these doors, let’s try.’

Endorsements are big money for countless celebrities and always have been — but now, it’s not really frowned upon to become a company mascot. Still, others choose to keep their side hustles off the grid.

“One of my boys, Dean Winter, who’s on Law & Order is Mayhem [All State],” Ice-T adds. “He said he did 100 of them. Basically, when Samuel Jackson says he makes more from that card commercial [Capital One] than his movies, pay attention. Beyoncé does Direct TV. People are doing it on the low. Cardi B. Everybody’s doing it on the low.

“But it’s lucrative. It’s lucrative and these big corporations have the money. So if you’re somebody who’s kind of worked their way into Americana and people like you, they could go, ‘Oh, shit, let’s put Ice-T in a Nerf gun commercial,’ and it’s funny. They’ll pay you.”

“People go, ‘Well, damn, is Shaq selling out?’ Look, Shaq was an NBA All-Star, one gold ring. He ain’t playing in NBA now. Why the fuck shouldn’t he be doing Icy Hot commercials and getting a bag? What’s the matter with you? Entertainers, we exploit ourselves in different ways. If you say, ‘Ice, you want to be in my movie?’ It’s not my idea to be in your movie. It’s your idea.

“So I have to say am I willing to exploit myself in this movie? To what extent? Do you want me to get my ass kicked? Do I get to be the hero? If I’m a woman, do I got to show my breasts? We’re in entertainment. This is a business of exploitation.”

Ice-T has a few other fruitful endeavors that include music and voiceover work for the NFL, cartoons and video games. Needless to say, the man is busy.

“The third hustle would just be music across the board,” he says. “Body Count. Making music for television, movies, videos and stuff. I think my fourth hustle would be voiceover work. Because I do voices for the NFL. I do voiceovers for lots of video games and things like that, cartoons, things where it’s like, ‘We just need your voice.’ Then my fifth hustle would be random things or random projects that I have in production, like In Ice Cold Blood, which is a TV show I have on Oxygen.

“I think really that would come in front of music, those shows I have, In Ice Cold Blood, The Mediator, shows like that. Because I’m really counting on what money is made, which makes more money. So it would be Law & Order first, endorsements second, my other TV shows third, then music. And the music really flares up when you tour. I make way more money on tour.”

ICE Cold Fact: Ya wanna duck all the BS and the Drama? ‘Stay in YOUR lane and mind YOUR business’ That’s the trick. ? pic.twitter.com/K7UCBexLRw

When Ice-T is asked if he ever gets eight hours of sleep, he replies, “I try, I try. A lot of times, I can move on five. But whenever I can get to bed early, yeah, I try to.”

Ice-T will be able to kick back for a couple more weeks until it’s time for production on Law & Order to begin. In the meantime, he’ll be writing lyrics for the Body Count album and (probably) landing more endorsement deals.

Check back with HipHopDX later this week for Part II of the Ice-T interview.