After months of well received tracks in HipHopDX’s Audio Section; DX favorite Wordsmith is releasing his new anticipated mixtape for free to the viewers and fans at HipHopDX.

Presented by your favorite Hip Hop website, the mixtape is mixed and blended by DJ Furious Styles and features all of The Nu Revolution Camp. With production from Sketchman, DeMo, Strada, Capish, Street Level and more.

“I am very
grateful to the HipHopdx.com staff for supporting this mixtape release. Over
the past few months they have given me a forum to release music to the world on
a weekly basis, so I wanted to repay DX and the fans for giving me an honest
opinion on my music. It has been almost two years since I have released any
full length material, my last being ‘Statements & Stipulations,’
due to my management situation, so this is a celebration for me personally and The Nu Revolution Camp. Please enjoy the free download and look for
Volume 2 to drop in late March or early April along with my EP ‘Appetizer
at the Pioneer Pub.’ Finally, God bless and let my music shed some light
on these dark days in Hip-Hop.” – Wordsmith 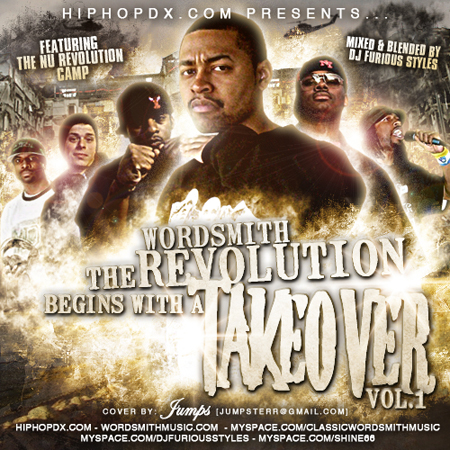 05 Grudge of a Madman (Produced by Sketchman)

07 Legion of the lyricists 2 Remix f. The Nu Revolution Camp (Produced by Capish)

13 What Should We Do With It f. RhymeZwell (Produced by One Condition)

17 A California State of f Feat. All-Biz (Produced by Professa)

As a special bonus to show appreciation to the fans of both Wordsmith and HipHopDX.com, there is also a 10% discount off the clothing from Vintage Limited (the clothing company that sponsors Wordsmith) included in the download. You can check the site now at www.vintagelimited.com.