Drill music became one of the sounds of the last decade when Chicago artists like Chief Keef, Lil Durk, G Herbo, the late Fredo Santana and more helped popularize the hard-as-nails music with fans who loved the honest tales of the violent street life. From there, the drill movement spread across the globe and sprouted up in the UK with their version of the hard-hitting sound sweeping that part of the world. Before long, other countries were adopting the new sound.

These days, Brooklyn Drill is the new sound that’s heating the East Coast and its flame is quickly spreading across the country. It’s become so popular that people are now calling it New York Drill since it’s become the definitive sound of the city. With rappers like Drake, Nick Minaj, French Montana and more hopping on the speaker-rattling production, New York Drill looks to have a long future ahead of it. But with a similar sound, New York Drill gets constant comparisons to its predecessors in Chicago and the UK.

According to Sheff G, one of the pioneers of New York Drill, there are obvious similarities between them, and he gives praise to the Chicago pioneers. But he also maintains that the version he helped usher in is its own thing. Growing up, Sheff listened mostly to Chicago Drill rappers so it makes sense where the inspiration stems from.

“It wasn’t really like the Chicago Drill sound, but of course, Chicago has something to do with [New York Drill], you know what I mean,” Sheff told HipHopDX via Zoom. “Because it was like, yo, I was listening to like when Chief Keef came out and shit, you feel me? All that extra music, Lil Herb and them, you feel me? That’s when I started tuning into music myself like yo I started going on YouTube and tuning into the videos and shit.”

Sheff continued, “So I was like, yo, the shit they were doing was lit. Let’s do it like how they did their videos and shit. By the time we started using the Drill beats, it wasn’t even Chicago beats. The beats that we were using ended up being the UK beats but we didn’t know that. We was just typing in Drill beats 2017, drill beats 2016 and whatever popped up, if we like it, then we will go record it.”

At first, Sheff was just making music as a means to leave his troubled situation behind, not creating the definitive sound of New York City. But he did know something big was about to happen if he and his peers kept working at their craft. Once the buzz started to grow off his debut single “No Suburban” in 2017, Sheff would begin to understand his position as a pillar in a new movement that allowed him to turn his life around.

There’s a good chance without the steady stretch of singles that artists like Sheff and his rival 22Gz dropped in 2017, New York Drill would probably not be where it is today. One of the most vital moments of New York Drill came this past summer when a band of youthful protestors paraded down New York City street blocks blasting Pop Smoke’s “Dior” during the Black Lives Matter rallies.

most New York shit ever, Popsmoke on right outside of Trump Plaza pic.twitter.com/s6OxH00gE1

Brooklyn always knows how to get down after a peaceful protest. Yall already know New Yorkers love them some Dior by Pop Smoke

Tw:// I sure did mess up the lyrics 🥴 pic.twitter.com/aliBkmKCE7

The rebellious and energetic vibe of New York Drill music translated with the protests that dominated the latter half of 2020. To protestors, there was no other genre that could perfectly capture the energy of the movement. Because the protesters used a New York Drill record, Sheff takes pride in being a pioneer in something most people didn’t believe in at first and gave him, and his peers, hell for back in the day.

“[I’m] definitely one of the realest, you understand? Shout out to my boy Sleepy, you heard? Definitely one of the realest originators and never copied nobody, never faked it, never nothing, you heard? Everything is 100 percent from the jump to now, and we going to keep it like that. That’s why so much people tuned into this type of shit because it’s real. That’s a fact,” he added.

Pop’s contributions to the sub-genre transcend it to new heights in 2019, and he became the scene’s biggest artist in a matter of months. Even though his untimely death dealt a significant blow to the sub-genre, it brought more notoriety to the breakout sound. Sheff feels he’s the most real out of the crop of New York Drill rappers, but he makes sure to tip his hat to the young legend. 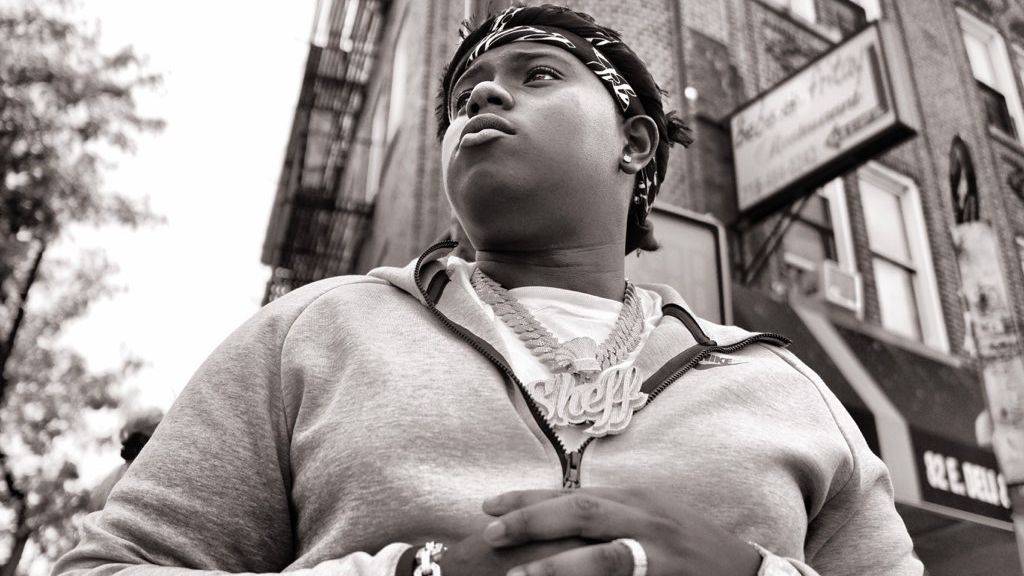 “Pop was the one that really showed the labels and everybody else that Drill music can really transcend from what they thought it was to how big he made it,” Sheff said about his late friend. “I guess I didn’t really know how everybody was looking at it before, coming from Brooklyn, because there wasn’t so much light on it.”

Sheff went on to say, “After Pop did what he did all of a sudden there was mad light on it. So shout out to my boy and rest in peace to him you feel me? When he did that, he did his thing. His name is going to live on forever.”