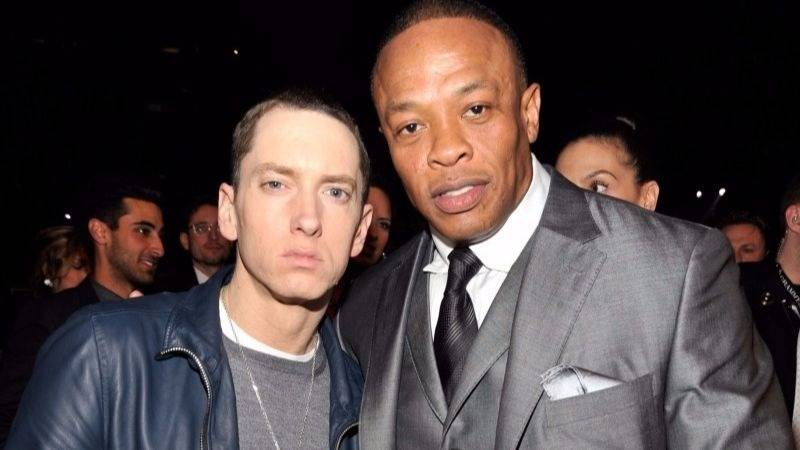 Eminem's 'Music To Be Murdered By: Side B' Is Happening According To Dr. Dre Affiliate Dem Jointz

Rumors of an impending alternative version of Eminem’s Music To Be Murdered By album have been floating around online for the past several days. While KXNG Crooked more or less debunked its existence — or at least played coy about knowing anything about it — producer Dem Jointz appeared to suggest otherwise.

In an Instagram post shared on Tuesday (December 15), Dem Jointz displayed the cover art for several projects he says he worked on this year. In addition to crafting the song “Never Love Again” for Music To Be Murdered By, Dem apparently contributed to a Music To Be Murdered By: Side B, which sits right next to the original cover art in the photo.

He wrote in the caption, “Even Thru The Shit-Storm, Thank God For Another Successful Year!! . . . #ProducedWrittenMixedByDemJointz.”

Whether this was an egregious error and Slim Shady and his team are chewing him out as Wednesday (December 16) gets underway remains to be seen. But Shady sleuths have been attempting to uncover clues to confirm another dose of Eminem is right around the corner.

The rumor started to gain steam after fans spotted director Cole Bennett, who was behind Shady’s “Godzilla” video, in Detroit’s 8 Mile area. Then, a heavily bearded Eminem was snapped in front of a green screen, pointing to another music video.

On Sunday (December 13), an album cover for the mythical Music To Be Murdered 2: B Sides project began making the rounds on Twitter and was followed by a tracklist boasting features from Royce Da 5’9, Cordae and singer Skylar Grey, among others.

But Crooked insinuated the alleged tracklist was bunk after someone pointed out the COB (Circle of Bosses) logo was fake, tweeting, “Oh I know that part for sure because I own that company haha but salute.” He added, “Dear Stans.. I can absolutely not confirm ANYTHING that has my logo on it. Sorry guys.”

Oh I know that part for sure because I own that company haha but salute ✊? https://t.co/2jjADv0nx6

Music To Be Murdered By found Eminem rapping over Dre beats for the first time since Recovery’s “So Bad.” The billionaire Hip Hop mogul is credited as executive producer on the album. For now, Shady fans are hoping Side B will arrive on Friday (December 18).