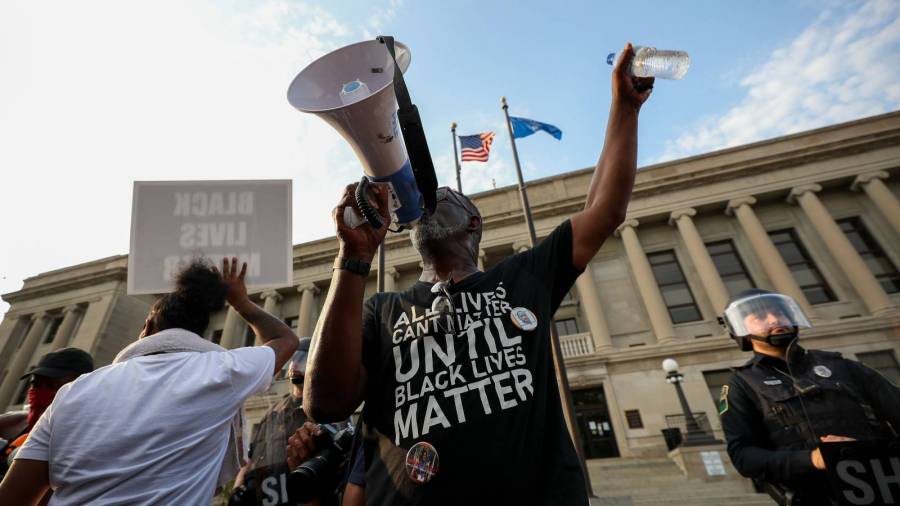 Kenosha, WI – Kenosha, Wisconsin police are under heavy scrutiny after KPD officers shot unarmed Black man Jacob Blake in the back seven times, severely injuring him. The incident occurred on Sunday evening (August 23) as Blake was attempting to break up a fight between two women.

When police arrived on the scene, neighbor Raysean White was already filming the altercation. As Blake walked toward the driver’s side of his car and opened his door, police are seen closely following him before shooting him seven times in the back. According to USA Today, attorney Ben Crump said in a press conference Blake is now paralyzed from the waist down.

“The medical diagnosis right now is that he is paralyzed,” Crump said on Tuesday (August 25). “It is going to take a miracle for Jacob Blake Jr. to ever walk again.”

Much like the May 25 police killing of George Floyd, the incident has sparked outrage across the country. The Blake shooting is yet another in the long list of unarmed Black men and women shot by White police officers.

50 Cent, who was vocal about Floyd as well, took his sentiments to Instagram for his 26 million followers, writing, “If this wasn’t attempted murder, I have no idea what’s going on.”

🤦‍♂️if this wasn’t attempted murder, I have no idea what’s going on. 🤷🏽‍♂️ #bransoncognac #lecheminduroi

Meanwhile, Cardi B also expressed her outrage on Instagram, telling her roughly 74 million followers, “Wow this is SICKENING ! I can’t believe it ! What’s going to be the excuse now ? They just don’t give a fuck nomore ! SOMETHING MUST HAPPEN !Yooo this is insane they really not giving a fuck anymore. Lord please!”

Wow this is SICKENING ! I can’t believe it ! What’s going to be the excuse now ? They just don’t give a fuck nomore ! SOMETHING MUST HAPPEN !Yooo this is insane they really not giving a fuck anymore.Lord please!

The officers involved in the Blake shooting have been placed on administrative leave. The Wisconsin Department of Justice is leading the investigation and plans to present a report within 30 days.

“They shot my son seven times,” Blake’s father said. “Seven times. Like he didn’t matter. But my son matters. He’s a human being, and he matters.”

Kenosha is in its second day of protests. By late Monday (August 24), a truck had been lit on fire along with several structures, including a Wisconsin Department of Corrections building and local furniture store.

In addition to 50 and Cardi, several other rappers and celebrities have also voiced their disgust and sadness on social media, including Nas, Beyoncé, DJ Quik, T.I. and Paul Wall. Check out a few of the additional reactions below.

Jacob Blake. Unarmed. Shot 7 times in the back. Coward shit. Prayers to Jacob and his family.

The only news I care to post on the matter. ✊🏽Get well soon King 👑 We witchu💯 #JusticeForJacobBlake

#JacobBlake Damn World were are the Police Serial Killers???

My heart hurts for Jacob Blake and his family. Just crushed 💔. I’m at a loss for words. #BLM

Prayers for #JacobBlake and family

And y’all wonder why we say what we say about the Police!! Someone please tell me WTF is this???!!! Exactly another black man being targeted. This shit is so wrong and so sad!! Feel so sorry for him, his family and OUR PEOPLE!! We want JUSTICE https://t.co/cJxOj1EZ3H

7 shots in the back of #JacobBlake are not justified.There must be non-violent protests & a thorough investigation to get to the truth. #BreonnaTaylor, #TrayfordPellerin…White supremacists disguised as policemen must be rejected everywhere. #KeepHopeAlive pic.twitter.com/MGc90BTnxV