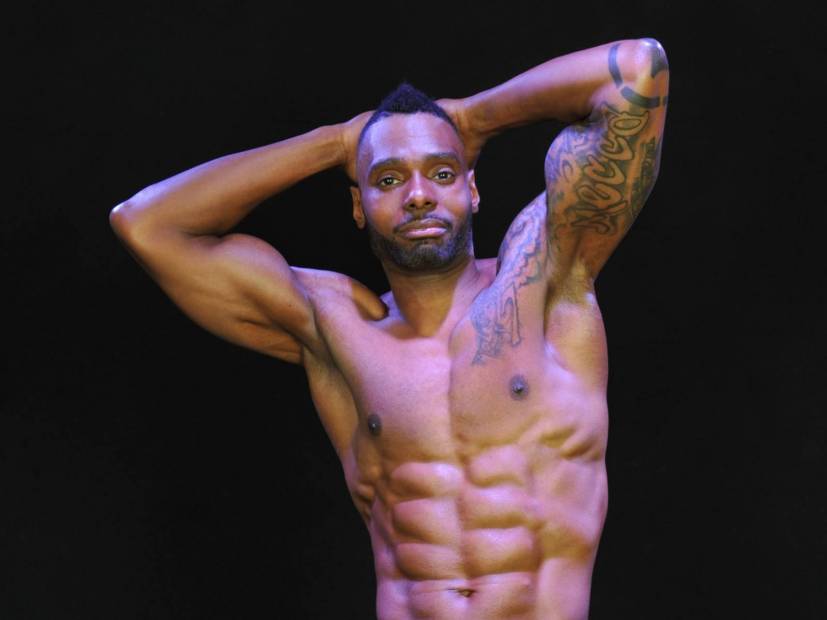 As most Americans continue to abide by the nationwide stay-at-home orders, the need for exercise seems more paramount. The possibility of actually disappearing into the couch as we type away on our laptops or dive into our 10th Netflix binge of the week almost seems plausible. That’s where celebrity trainer and author Mark Jenkins comes in.

Since the coronavirus pandemic kicked off, the Brooklyn native and former Navy recruit has been hosting three hour-long Instagram Live workouts per week in an effort to combat the COVID-19 blues. Using coconut water bottles, brooms and jugs of laundry detergent, he transforms every day household items into tools for a home gym. The popularity of his workouts landed him a spot on BET for the “House Party Presents Living Room Fitness” event.

“I was totally not expecting the response,” Jenkins tells HipHopDX. “I said, ‘I think people are going to need the stress release. Let me do something.’ Specifically, I have a fan base with the African-American community, people who have transformed. I wanted to just do something so people could blow off some steam and get in shape, talk about the importance of fitness and play some good music.”

Use the time ! Come out of this period stronger in every aspect ! Meditate , Train , learn new skill sets ! Read! Make the most of the isolation to listen to the voice within. #keepgoing #dontstop #reinventyourself #cleanse #reflection #strategy #read #discover #rediscoveryourself #markjenkinsmethod??✌?️?? #training #thewayisintraining #neckflex #boxingtraining #cardio #wereallinthistogether #handeyecoordination

Jenkins is the same trainer who whipped D’Angelo into such impeccable shape, the legendary R&B artist decided to go shirtless for his 2000 video “Untitled (How Does It Feel)” from his Voodoo album. He’s the same trainer who got Diddy into top form so he could run the New York City Marathon.

He’s trained Missy Elliott, Mary J. Blige and Q-Tip. He’s currently working with Public Enemy’s Chuck D and Anderson .Paak, among others. But over the years, he noticed as some of the artists he worked with age, it’s more important than ever.

“Even prior to the coronavirus, I had been talking to Chuck D and I was like, ‘Hey man, we need to do something, because all of these guys … I’ll be 50 on May 2, and I started training artists in 1992,” he says. “I think my first artist was Brandy before I trained D’Angelo for the ‘Untitled’ video.

“All of those guys who I knew back then, they either have huge health problems or they’re dead now — all of these dudes in the Hip Hop community, man. It was really something that I wanted to do just to get people active, because even before the coronavirus, you hear about at least five or six deaths of someone in their late 40s, early 50s — gone too soon.”

Jumping with one foot in front of the other so it translates into boxing a little bit easier . #functionaljumping

Jenkins’ philosophy was born out of his own personal struggles. Overweight as a kid, he wrestled with a junk food addiction — in fact, he chose to join the Navy because he was told there was a McDonald’s on the ship.

“When I got to the ship, I was like, ‘Yo, where’s the McDonald’s?'” he says with a laugh. “They kept calling ahead, ‘Send this idiot five decks below.’ They sent me around the ship looking for McDonald’s for like two, three hours.”

Despite the absence of Jenkins’ favorite fast food restaurant, he also knew his time in the military would get him in shape, which it did. That experience gave him the knowledge to start training other people.

The turning point in his career was the success he had with D’Angelo.

“To D’s credit, he had a vision about how he wanted to look with the music,” Jenkins explains. “We got together and I heard the music. I said, ‘Man, it’d be crazy if you could do that shit with no shirt on and just tell the story and be in shape.’ I knew once I heard the record that he was a once in a lifetime artist and everything just lined up.

“When D’s on, he’s 100 percent on and he really trained hard for that. But there was a lot of waiting because he’s never one time. Everybody knows that. And it’s a lot of nighttime — he doesn’t start till 5 or 6 p.m. That’s the morning for him. If we he had an eight o’clock session, you might get to him by 10 p.m. or 11 p.m.”

D’Angelo committed to a grueling regime for three months under Jenkins’ watchful eye.

“We did a twice a day, did road work and then weights in the evening or boxing, some type of cardio,” he recalls. “Or, sometimes we’d do sprints in the morning and then some type of weight training in the evening. Two days on one day off, three days on and two days off to focus on recovery as well as strict dieting. We did that transformation in the dead of winter in Central Park.

“So we were doing below zero runs. He’s a tough guy, man. We trained hard for that, so I definitely give him credit. What was so great about it was that it inspired so many people to get into shape man. That was what’s cool about it. That’s one of two times when I knew like, ‘Wow, I’m going to make an impact.'”

The other time was working with Diddy. In 2003, he trained the Bad Boy Records mogul for the New York City Marathon while appearing in the MTV docudrama Diddy Runs the City.

#tbt when I got @diddy ready for the #my marathon in 60 days ! One of the biggest turnouts to this day cause the youth came out to see #diddyrunsthecity ! Raised millions for the public school systems and beat Oprah’s time. No pressure at all lol! Just a lots of miles! Always have to respect @diddy no quit in him! #throwbackthursday #diddy #marathon #nycmarathon #run #markjenkinsmethod??✌?️?? #legend #willpower #goodtimes #abrooklyntale #hiphop #blackexcellence #motivation #train #fitness #fitnessmotivation #workout #neverstop

Now, the author of the fitness book The Jump Off: 60 Days to a Hip Hop Hard Body and founder/co-owner of International Fitness is taking his vast experience in the industry to Instagram Live and sharing the knowledge he’s collected over the past 28 years.

“It’s holistic,” he says of body transformations. “There’s social wellness. There’s financial wellness. There’s mental. I think there’s actually eight listed facets of wellness. Make it a journey and journal. I think journaling is so important for everybody, because when you’re feeling that addictive behavior, you want to write down your emotions. When you’re feeling good, you want to write down your emotions. You want to look back at your journal in two weeks and see if you recognize a pattern.”

He adds, “It’s been a long time I’ve been doing this. It’s the clients, man. I just want to thank everybody, because they took me under their wing. To be able to be a fly in the room and see guys record, see what makes them successful, it’s been definitely a privilege.”

Tune in to Jenkins’ IG Live every Monday, Wednesday and Friday at 12 p.m. PST. Find his website here.