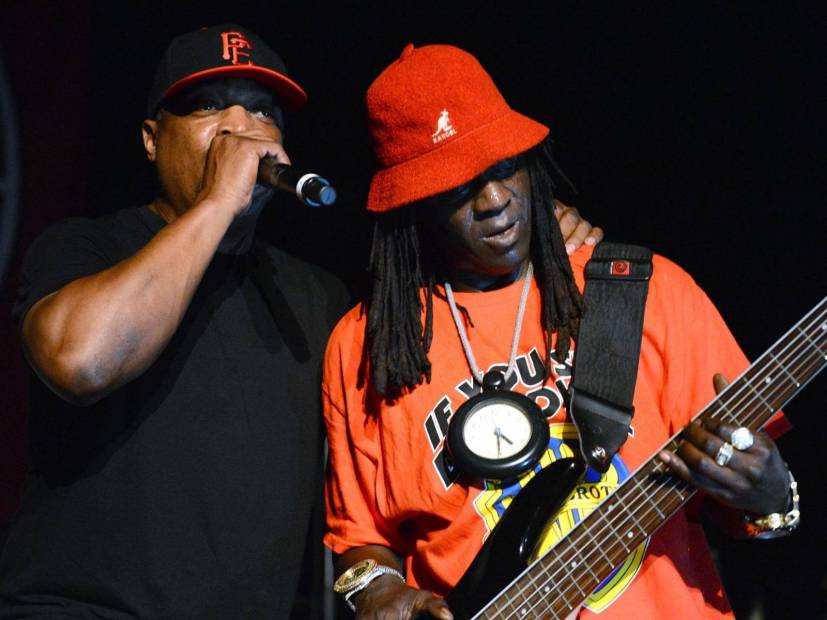 The Hip Hop community was up in arms after Chuck D and the rest of Public Enemy announced Flavor Flav had been kicked out of the pioneering group last month. What initially began as a legitimate disagreement over a Bernie Sanders rally erupted into Flav’s immediate dismissal.

Suddenly, everyone was talking about it. #ChuckD was a trending Twitter topic. Every late night talk show host from Jimmy Fallon to Stephen Colbert was cracking jokes about it. Every major publication, including CNN, made the Public Enemy split a headline. Miraculously, the general public somehow became experts on the inner workings of the group overnight. More people were talking about Public Enemy than they had in years.

But it turns out — the public discourse between the two longtime group members was ultimately a hoax, or as Chuck calls it, “the hoax that ain’t no joke.”

Los Angeles, I'm excited to announce I will be back in California this Sunday for a rally with Dick Van Dyke, @sarahkatesilverman and featuring a live performance from @publicenemyftp! RSVP at the link in bio. Art by @kiiarens

In an exclusive interview with HipHopDX, Chuck explains what drove him to this point.

“Going into 2020, this is the second decade where Hip Hop has skidded away to the point where the good look is never, ever considered and the bad look keeps getting elevated to the point where it’s just disrespectful,” he tells DX. “I had to figure out, ‘What is the teachable moment for me?’

“I think Jadakiss talked about it in his Ignatius album — it’s like, we can’t have dead rappers be the news that comes out that elevates them to the top. When does the good look get a look? When I saw Common do his performance at the NBA All-Star Weekend, I thought it was the greatest performance I’d ever seen a Hip Hop artist do on TV — and no one said anything.”

He continues, “The final straw for me was the young man Pop Smoke being murdered, and all of a sudden he becomes a name. It was reminiscent of the year before with Nipsy Hussle, somebody who I played and supported on our RAPstation networks. A few people knew his name but then he gets murdered and of all a sudden it’s this ground swell. The blogs, platforms and all Hip Hop media, I felt they were heavily negligent and started to hover like buzzards waiting for the worst thing to happen.” 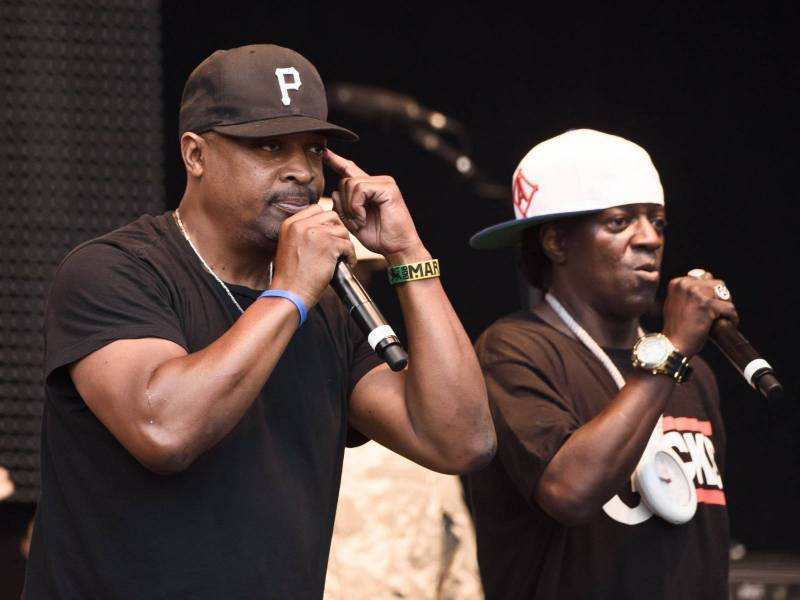 So when Flav’s legal team fired a cease-and-desist letter to the Sanders campaign contesting the use of “Public Enemy Radio” on promotional items, Chuck had already warned Flav he was going to “embarrass” him if he ever publicly bashed him — and this was the perfect opportunity.

“Flavor didn’t have a great 2019,” he says. “Anytime Flavor was in the news, it was on some bad look shit. He was dragged through the coals. We disagreed in 2019 until he got his shit together and we came to some kind of accord in January 2020. We said, ‘Listen, man, this is what you’ve got to do, bro. Boom, boom, boom, boom, boom.’ I was working on a record at the same time.

But Chuck understood and actually agreed with Flav. While watching a documentary on Orson Welles’ The War of the Worlds, a lightbulb went on.

“Flav was upset about that and understood that I was upset about that, too,” he continues. “But Enemy Radio was formed to do those benefits and political things, rally, or whatever. Flavor don’t give a damn if it was Bernie Sanders, Barry Sanders or Colonel Sanders.

“At the same time in February, I was watching the War of the Worlds documentary where Orson Welles used the apparatus of that time — radio — to flip the minds of those listening who really wasn’t fully paying attention to what he was saying. War of the Worlds was played out to be this big hoax. Now, I’m not saying our hoax was initially planned perfectly, but it kind of played itself out where Flavor’s lawyers and people would put a cease-and-desist on Public Enemy Radio, which I agreed to anyway. But I also said, ‘Listen, next time you bash me publicly, I’m going to bash you.’”

That’s where the firing came in. On March 1, Public Enemy released a statement confirming Flav’s removal from the group.

“He didn’t know he was getting kicked out, but he knew when he sent that letter, something was going to come back,” he says.”When the cease-and-desist went out, it was a prime opportunity to answer back and say, ‘OK. Boom. You’re embarrassed.’

“Then I got together with Flavor and I said, ‘Listen man, this is how this has got to roll out, because I’m very upset that every time we do a good look — for 33 years now — that shit gets looked at as, ‘Oh, it’s not relevant’ or ‘Oh, it’s sleepy music, or whatever.’ But if people get a bad look, they get elevated every time? That’s a fucked up thing and I’m going to actually use this as a teachable moment. When does important become as valuable as popular in a world on the edge of panic?”

For the past 31 days, Chuck has endured public backlash from fans of Public Enemy who were outraged Flav was no longer a member.

“I told Flav, ‘This is going to be a tough ass 31 days – for me especially,” he adds. “See, my stock is high, his stock was low. The only thing people see — they see him on Growing Up Hip Hop, the problem with his kids, the baby through his manager, Wendy Williams … all that stuff. It’s like, ‘Dude, in order for us to work together, we got to kind of be equal. So I had to take the sacrifice, man.

“On day two, everybody said everything and I was trending. And I said, ‘This is actually the point — 33 years of a good look. No media.’ One moment of a bad look and I’m trending.”

Over the past month, Chuck has watched — together with Flav — people he’s known for decades turn on him. But Chuck’s getting the last laugh.

“When we made the Rock and Roll Hall of Fame in 2013, it was a murmur in the Hip Hop circles,” he remembers. “It was crickets. Not that I’m saying it’s about me, but I’m saying that it was about me when the bad look was presented. I totally wanted to annihilate this premise.

“Before the world changed, we were just going to hijack April Fool’s Day and call it April Flav Chuck Day. We were going to hijack that and basically it was just a hoax. People would take it serious, but I’m saying, ‘No, I’m attacking the fact y’all were gullible and fell for it. I’m attacking it. And you know what? I knew it’d be 29 days of swimming in acid and of everybody saying everything. Even seeing people close to us, both me and Flav were looking at these people like, ‘Mmm-hmm.’”

But this was all part of the plan. Chuck acknowledges people are going to say “all kinds of things.”

“They’re going to ask Flav a whole bunch of questions he can’t answer,” he says. “I told him it’s got to be revealed on April 1 or people might say, “Chuck probably realized that he made a bad decision halfway through. He probably just said, ‘Yo man, this is a bad look for me.’

“You’re god damn right it’s a bad look. I made it a bad look intentionally. I’ve made an illustrated diary from February all the way up to April 1 and it’s called, There’s A Poison Going On, and it’s 100 illustrated pictures of what I’ve done since the Bernie Sanders rally. You can’t come up with an illustrated fucking book in two weeks.”

Now, Public Enemy and Enemy Radio are looking to the future. Flav is actually in the studio right now working on the final five songs for the next Public Enemy album that’s expected to arrive in June. Enemy Radio — Chuck, Bay Area MC Jahi, DJ Lord and the SW1s — has a new album dropping on Wednesday (April 1) called Loud Is Not Enough, a statement on some of the mainstream rap currently flooding the airwaves.

“There’s a lot of people pumping up the volume without saying shit,” he explains. “When style has been over substance for far too long, especially if you 30 and over and you’re spitting man, it’s like yo man, really?’ This is about entertainment. I come from a time when there was better entertainers — from Bob Marley to Gladys Knight and the Pips. They were better entertainers, better songwriters, gave better performances. They said some shit that made you think that you could sit with the rest of your life.

Case in point, “Food Is A Machine Gun,” one of 10 new tracks on the Enemy Radio album, takes aim at the food industry and damning effects of sugar, something nobody is really rapping about.

“Me, I write in attack mode,” he says. “I’m attacking the gangsterism and the corporate takeover of those who control the food. Humans are furnaces. They need food — good, bad or indifferent. When it becomes a game, a financial game where it benefits some at the expense of others, it’s gangsterism.”

Like 1990’s Fear of A Black Planet and 1988’s It Takes A Nation of Millions … To Hold Us Back, Public Enemy has and always will continue to stand up for what they believe in, no matter the consequences.

“I will boldly say, what I put together with Flavor and Enemy Radio, is the most important rap record of our present time and century,” he emphatically states. “I’m making that claim.

“All Public Enemy has to do is be. When you see Mick Jagger and Keith Richards [of the Rolling Stones] on stage, they moving the fucking buildings. When you see Chuck D and Flavor Flav on the stage together, you better back the fuck up.”