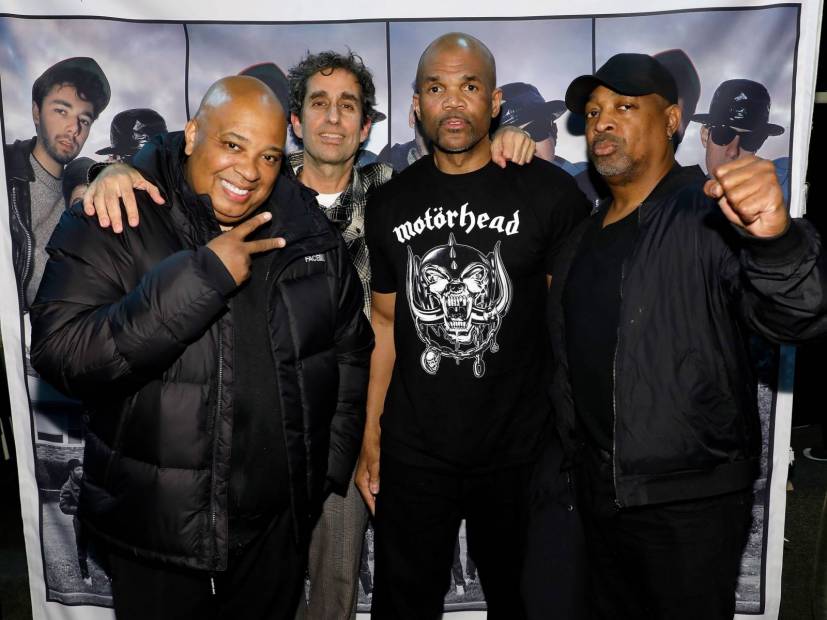 Glen E. Friedman On Getting Chris Rock To Write The 'Together Forever' Book Foreword

New York, NY – After Hip Hop was birthed in the Bronx and began taking its first, wobbly steps toward becoming the global powerhouse it is today, veteran photographer Glen E. Friedman was there to capture key moments in the genre’s history.

In 1981, only a day after the punk incarnation of the Beastie Boys had opened for Bad Brains at CBGBs in New York City, a 19-year-old Friedman was introduced to a slightly younger Adam “MCA” Yauch and Michael “Mike D” Diamond.

The following summer, Friedman and some friends attended a screening of the Sex Pistols film The Great Rock ‘n Roll Swindle at a roller skating rink in the city called The Roxy. There, he saw Yauch once again and was introduced to the now-legendary Rock Steady Crew. His mind started spinning and he knew he wanted to photograph events like this.

Years of tireless work and dedication to his craft has resulted in Friedman’s latest book, Together Forever, which was released last November through Rizzoli Books. He describes that evening at The Roxy as “a life-altering event.” His punk rock origins eventually took him down the path to Hip Hop and ultimately, Run-DMC and the unbridled Hip Hop version of the Beastie Boys.

Over the course of his career, Friedman’s photos became the cover of Beastie Boys’ 1992 masterpiece Check Your Head, Run-DMC’s Walk This Way, Public Enemy’s first two groundbreaking albums and three of Ice-T’s earliest LPs, among many others.

Together Forever encapsulates Run-DMC and the Beastie Boys’ ascent to notoriety. But more importantly, it spotlights their ability to bridge the gap between race, religion and any other perceived differences.

To celebrate the book, Friedman teamed up with Shepard Fairey for a limited run of collaborative poster prints and clothing featuring a mashup of Friedman’s photos and Fairey’s art.

“The book showcases all of his amazing photos of RUN-DMC and Beastie Boys from before they were well known, through their time as collaborators/tour mates and well beyond,” Fairey wrote on Instagram. “As creative pioneers, both groups expanded the cultural influence and reach of Hip Hop.

“I especially like that ‘Together Forever’ explains how the two groups were friends and worked closely together, as it promotes racial unity. In the current climate of divisiveness, it’s a great reminder that there does not need to be a racial divide.”

In a recent interview with HipHopDX, Friedman talked about getting comedic actor Chris Rock onboard to write the forward for Together Forever, revealing in the process what a big fan of the Beastie Boys and Run-DMC he’s always been.

“Once you read [Rock’s] introduction, you will see what his connection is even more,” Friedman explains to DX. “But I picked him because we all knew Chris Rock, and he came up around the same time. He wasn’t famous when the Beastie Boys’ first record hit. He got his first movie part a couple years later playing a crackhead in New Jack City. Chris grew up with all them, and he loved Run-DMC. He was at Jam Master Jay’s funeral.

“I know him just a little bit. We’re friendly and we have mutual friends, and we’d talk over the years and bump into each other. He bought a print from me some years back, and he’s just a super nice guy and a big fan of both groups. So I just thought it would be really cool to have Chris write something, and it took a long time to get him to do it, but we did it and it’s great. His perspective is really unique and it’s really good.”

Throughout the 224-page book, Run-DMC and Beastie Boys’ adventures are immortalized through Friedman’s lens. Photos of Ad-Rock, Mike D and MCA posing with The Ramones’ Joey Ramone and Parliament-Funkadelic’s chief architect of funk George Clinton and Run-DMC making history as the first rap group on American Bandstand electrify every page and give readers a sense what it was like to be a part of those early  magical moments and beyond.

Bringing Fairey onboard to supplement the book only sweetened the pot.

“Shepard and I have been friends for quite a while now,” Friedman explains. “This might even be our 10th collaboration. We’ve done a lot — some were unauthorized in the beginning and very soon thereafter, they became authorized and we started working together. They are true collaborations. They’re really good.

“I really like them, because people have been trying to use my stuff on clothing and different things over the years, and I generally don’t like that at all. I don’t think photos work well on t-shirts. But when there’s an artistic rendition of them, I think it works pretty well. The way Shepard does it, it works really well. He’s a master craftsman and only does these when he’s equally inspired by the subjects, and that’s how this works.”

As Friedman and Fairey embarked on the Together Forever collaboration, they set out to do something similar to Friedman’s 2014 book My Rules.

“We did four collaborations for that,” he says. “Really, they were all images that we already had done collaborations on, and we made a clothing line to help celebrate the release of the book. So My Rules was the original Public Enemy illustration. That was one of the first collaborations we did together, then the Tony Alva one and then Dr. Cornel West and Henry Rollins. We had all four of those garments, and they were posters we’d had done in the past.

“For this book, we wanted to celebrate the release and do the same thing, but actually we didn’t have the posters yet. Shepard wanted to do the illustrations based on the photographs. The one of Run-DMC is based on two different photographs taken one after the other but the better elements of the two because it’s a rendition. I said, ‘Why don’t we just combine these two? Because I actually like Joey’s [Joseph “Rev. Run” Simmons] fist up in this one, but I like Jam Master Jay better in that one. Let’s just do that.’ I like it more. The further it is away from the original, the better because it’s more Shepard’s thing and unique.”

Those Run-DMC enthusiasts hoping to get their hands on the signed poster prints are out of luck unless they go to the secondary market. As anticipated, the limited edition of prints completely sold out in less than three minutes.

“I like what Shepard does with them and really, we did them just to celebrate the release of the book,” Friedman says. “The book was very exciting and fun, and the book is just a really great book.But after we did those things for the clothing, we spoke to Run-DMC and their people to see if they would be interested in us actually making a print of one of them that they could sign and all that. They were into it.

“Darryl [McDaniels] is always supportive of anything I do. He’s a great, great guy. So we ended up doing the poster. Darryl and I signed it back in May of last year, and it took Joey [Run] all the way until January when he came out for the Grammy Awards to sign it. That was good. He got to see Shepard and now the print came out.”

While the posters may be sold out, the clothing line can be found here while Together Forever is available here or at your local book store.