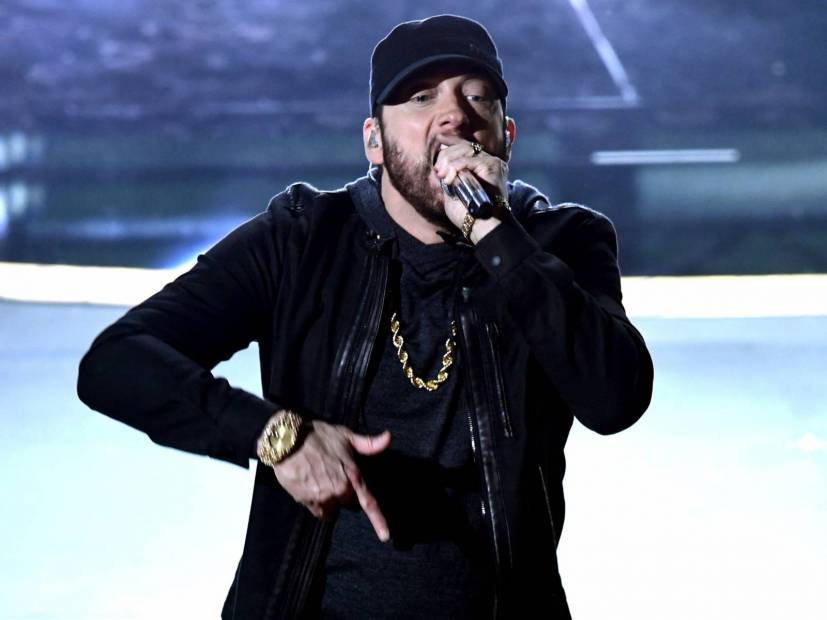 Eminem made a surprise appearance at the 92nd Annual Academy Awards on Sunday (February 9) and basically confused everyone.

Why is he here? Why is he performing “Lose Yourself,” a song that earned him an Oscar 17 years ago? Why is Martin Scorsese sleeping during the performance?

During a rare interview with Variety, Slim Shady explained why — after initially skipping the 2003 ceremony — he popped up all these years later to finally grace the Oscars with his presence.

“Lose Yourself,” which was included on the soundtrack for 8 Mile, was released in 2002 as the lead single. The song was written and produced by Em alongside Jeff Bass of the production duo Bass Brothers and Luis Resto.

On the night of the 2003 Oscars, Em wasn’t concerned about red carpets, gilded trophies or his nomination in the Best Original Song category — he was focused on taking care of his young daughter.

“I think I was just at home with my daughter — and I didn’t watch it, either,” he recalled. “At that point in time, Hailie had to be at school early in the morning, so [I was sleeping]. Luis Resto, my keyboard player who produces records with me, went up and accepted it — and I know people were probably like, ‘Who the fuck is this guy?’

“So he called me, and I remember the phone kept ringing, and I’m like “Motherfucker, I’m tryin’ to sleep!’ But [I answered] and he’s like ‘Hey man, you won!’ ‘I did? Shit! Cool!’ But that was a different time and I was in a different place in my life.”

Shortly after the performance aired on Sunday night, the multiplatinum-selling rap titan hopped on Twitter and relived the moment Barbara Streisand announced he’d won in GIF form while thanking The Academy in the process.

Look, if you had another shot, another opportunity… Thanks for having me @TheAcademy. Sorry it took me 18 years to get here. pic.twitter.com/CmSw2hmcZo

Speaking with Variety, Em also talked about how the performance came together, confirming 8 Mile was already in a montage that evening and the Oscars just happened to ask if he’d be open to performing. Surprisingly, he said yes.

“I think that’s pretty much how it went,” he said. “And it was cool because we just put out an album, so we said maybe that’ll make sense with the timing of the new album. We flew in [to Los Angeles] last week, so we probably have four or five rehearsals just to make sure we got everything right. Most of the rehearsals were offsite, not in [the Dolby Theater], just trying to keep it secret.”

In terms of keeping it under wraps, the typically elusive rap star was onboard for that.

“I think it was either [the Oscars’] idea or Paul and [longtime publicist Dennis Dennehy’s] idea before they brought it to me,” he explained. “It was presented to me that way and I said, ‘Oh that’s kinda dope, to not even announce it.'”

Elsewhere in the brief interview, Em said he’d be open to another acting role if the right script came along and revealed the new crop of MCs he’s been into, which includes one of his Music To Be Murdered By collaborators.

“Well, we had Young M.A on the album, and she’s definitely one of the new artists that I’m super excited about — every time she puts something out, I listen,” he said. “And the guys we have signed to our label, [Buffalo, N.Y. rap trio] Griselda, that’s exciting. YBN Cordae, he’s dope.”