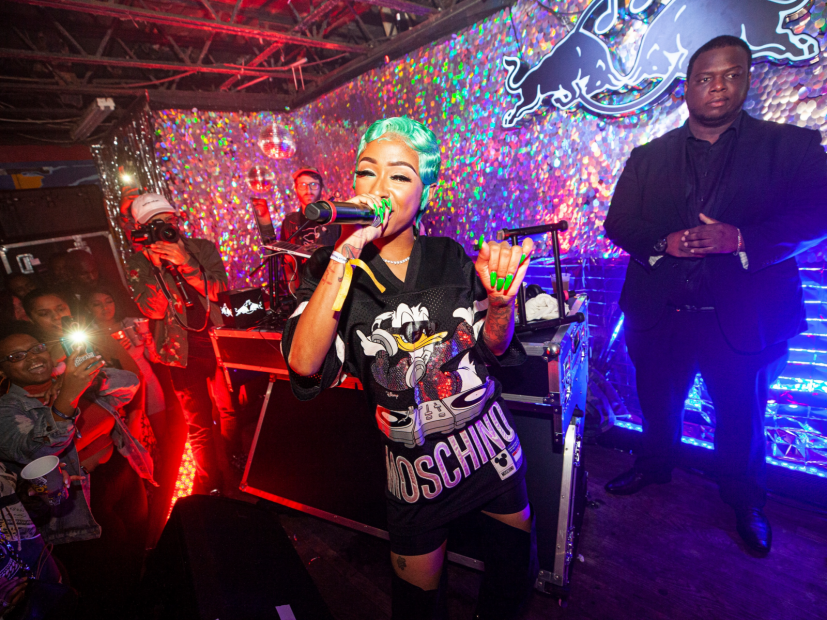 Atlanta, GA – Princess and Diamond of Crime Mob, the group that gave us “Knuck If You Buck,” kicked off the second weekend of the Red Bull Music Festival Atlanta. The veteran MCs became staple innovators in Atlanta’s crunk scene as teenagers, when they joined Crime Mob’s M.I.G., Cyco Black, Lil’ Jay and Killa C in 2004. In what had initially been a no-girls-allowed zone, Princess and Diamond helped usher in the group’s hits — and crunk mainstays — “Rock Yo Hips,” “Stilettos (Pumps)” and “I’ll Beat Yo Azz.”

After leaving the group in 2007, Princess and Diamond were reunited when Solange reached out to them about sampling their mock interview on her When I Get Home album. The rappers were set to join Solange on stage at her Coachella performance earlier this year, although it was ultimately canceled. However, Solange invited Crime Mob’s leading ladies to perform at her Met Gala after-party, where the sparks of their past crunk camaraderie flew.

“It motivated us to get together and to realize how much power that we have together,” Diamond said.

Since regrouping, the duo released their five-track EP, Vagina Power. Now, they’re getting ready to redefine the sound of Crime Mob in a new album. Princess and Diamond say the record will stay true to its Dirty South roots, but is more mature, well-rounded and, most importantly, female-fronted.

“We’re older now and we have kids and everything, so it’s gonna be a more mature sound,” says Diamond. “We’re females, so we want to make sure that we bring to the table a subject that really reflects on women.”

DX caught up with the duo about where their next album is heading, how female rappers have changed the industry and performing for Solange.

HipHopDX: What is Crime Mob currently working on?

Diamond: We’re in the beginning stages of our third album — pre-production, picking up tracks. Myself and Princess are dealing with other producers and kind of coming up with some tracks to present collectively. That’s kind of how we recorded Vagina Power—pre-production first, out of our home studio. So, we’re kind of getting an idea of what tracks we wanna work on, what concepts we want to bring. We’re at the beginning-middle stages of it, but it kind of moves real fast once you get past this part. It’s just a matter of, you know, what sound are we going with, what concept. And for Princess and myself, we’re females, so we want to make sure that we bring to the table a subject that really reflects on women. It should be interesting to see what we come up with this time around!

HipHopDX: Could you see yourselves doing any collaborations on this project?

Princess: Right now, we’re trying to get the Crime Mob sound, and then there’s a couple of people that, as far as outside producers and stuff, that we’re working with. And then we’ll bring the features in on the tail-end, once we have that sound all the way together.

HipHopDX: What are you planning to do differently from Vagina Power?

Diamond: I think it’s definitely important for us to reestablish the sound of Crime Mob, right now. Like, what does Crime Mob sound like 15 years later? Pretty much the same, but just bigger and better. I don’t think we’re gonna lose our core audience. We know what people wanna hear, but we’re also grown as well. And it will be different to have outside producers or features because there’s so many of us in the group that on the first Crime Mob album, we didn’t have many outside features or outside producers. So that will be new and different because we’re used to doing everything ourselves and having the production in-house.

HipHopDX: Right, and you can bring your own narrative.

Diamond: Yeah, we’re speaking on our lives, and then when we’re doing also Crime Mob records, but more mature. We still have the club records, but we also have songs like “Getaway,” that’s more of a bae record that you want to ride around the city and listen to with your boo. And the strip club song that we have, called “Pole,” it’s more of a well-rounded sound instead of it just being tear-the-club-up music. We’re older now and we have kids and everything, so it’s gonna be a more mature sound.

HipHopDX: You both performed at the Red Bull Music Festival in Atlanta. Who are some of your favorite artists coming out of Atlanta right now?

Diamond: I like Omeretta. She’s not getting the shine that I think she needs to be getting, ‘cause she’s hard and she’s believable. You can see the passion and the pain at the same time. And she’s young, so it’s gonna be beautiful to watch her grow. Then there’s a couple of others —

HipHopDX: Did you see her CAMP performance?

Princess: I saw on her [Instagram] story! She came to our performance. But baby girl is so creative, just even looking at her wardrobe, you know? I really respect artists that kind of come up and do their own thing. Even though nothing is really new, everything is repeated, but she got her own thing going. She’s got a huge following, everybody in the crowd knew all her words. And she’s just so humble, such a sweetheart. I think that type of attitude is important to have, at least it’s allowed us to stay out here as long [as we have]. Paying homage to the people that were before you, and it’s also just about unity. Just trying to stick together, to put your differences aside and get things done.

HipHopDX: And she’s one of many female rappers who are coming up right now. Throughout your careers, you’ve definitely seen an increase of female rappers making their own lanes.

Princess: It’s been amazing to see. It’s crazy that it kind of happened overnight because when we started, females were high-risk for investing and trying to get money back in the market, and it just wasn’t too many avenues for females. And I think everybody who’s come and had a run of success — Nicki, Cardi, DeJ [Loaf] — and then everybody who’s coming now, Megan, Kash Doll — everybody is playing their specific role. Everybody kind of has a different subject matter and a different look, so we’re showing the rest of the world and the younger generation that nobody has to follow the same path anymore. You don’t have to come from a group, you don’t have to dress super sexy or super tomboy-ish, you can just be yourself and find the people who rock with you.

HipHopDX: You two were pioneers of that, being the first and only women in Crime Mob.

Princess: Yeah, the boys started off the group and then we came in and it felt different, even though Three 6 Mafia was another group with the majority male and two females. We’re kind of like their children. We listened to them growing up, so it was only right for us to kind of be compared to them. But we were younger and me and Diamond brought a softer side to rap, where you could still be cute, you could still have on heels, but you could still get your ass beat.

HipHopDX: Did you ever get offered a stiletto deal?

Princess: Man, we wish! We should have.

Diamond: That’s something we’re working on! I did a small round with Dollhouse Shoes.

HipHopDX: So, did Solange reach out to you personally about using your sample in her album?

Diamond: Yes, she reached out to me initially. We were supposed to meet up with her. She wanted us to come to the studio and listen to some vocals before she had even used our vocals on the project. And then, something happened, we weren’t able to come through. And after that, we were supposed to do Coachella. All her band members had got sick and there wasn’t even time for her to hire new band members to have the actual set. I know for me, I was crushed, ‘cause Coachella has always been on my bucket list.

Diamond: And then that’s when the Met Gala came about. So, at that time, her album had already been out, we’d already heard the sample, and we were just super excited that she wanted us to come out for her Met Gala after-party to perform. And from there, just like meeting her in person and talking to her again, it was an instant vibe, it felt so good to just be appreciated [for being] ourselves — the hair, the tattoos, the style. It motivated us to get together, and to realize how much power that we have together. ‘Cause at one point, me and Princess were doing our own things, solo.

Princess: Well first off, we thought we were getting punked, ‘cause the venue — it was very intimate. It had streamers and stuff coming down from the ceiling and it wasn’t a stage, it was an Indian restart. So, it wasn’t really set up for a performance. We were like, is this for real? Is this all a joke!? And then, a couple minutes later, Solange pulled up and was like, ‘Thank y’all for coming!’ It was surreal. We were both nervous, and then “Stilettos” came on, and right when she heard that she just turned around, sat Indian-style on the floor and pulled her phone out. And we were both like, ‘Oh shit,’ it’s about to go down.

HipHopDX: When “Stilettos” came on, did you just pick right back up like you never left off?

Princess: Oh yeah. Every time the music comes on, we get in our own trance as performers and everything else goes out the window. It’s about the art and it’s about the fans.

HipHopDX: What else can you tell us about your upcoming album? Do you have a release date yet?

Diamond: We don’t have a release date, but the feel is just gonna be like more mature subject matter. It’s still gonna be Crime Mob, still gonna be fun. I’m more of an emotional person sometimes, like with R&B music, so we have “Getaway,” which is slower and has more of an R&B-type of a hook, and it’s talking about us getting away and going to see whoever we finna go see. And then there’s another one called “Say Yes,” which is gonna be a spring, summertime, island-type vibe and we’re actually singing on there.

It’s a couple of different feels. It’ll probably be a soft nine songs to start off with, just to see what people gravitate to, and then we’ll go from there. And the title, we don’t wanna give it away too soon, but it’ll be Crime Mob-related.