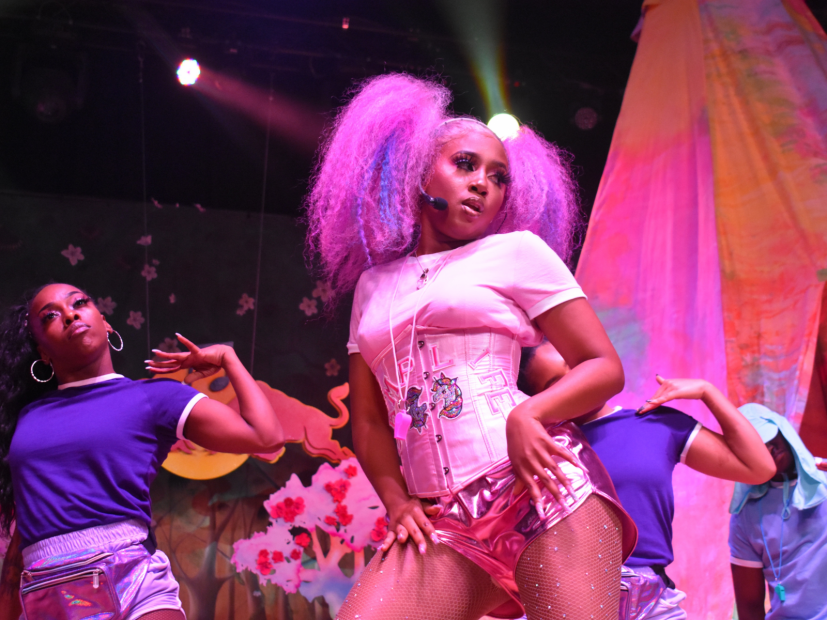 Bit by bit, Yung Baby Tate is steadily paving her own road to stardom. Growing up around music as the daughter of soul singer Dionne Farris, the emerging artist has become a hot-pink force through her hustle, intoxicating stage presence and ability to combine power-punch raps with breezy pop hooks.

The 23-year-old Atlanta native dropped her debut album GIRLS in February along with a short film of the same name. Also this year, Tate co-wrote and was featured on the Revenge Of The Dreamers III song “Don’t Hit Me Right Now” alongside Bas, Cozz, Guapdad 4000 and Buddy.

At the end of October, the rapper/singer/producer released the first offering and title track of her forthcoming Camp EP. Tate continued the project’s rollout with a lively performance — also called Camp — at the Red Bull Music Festival Atlanta on Saturday (November 9).

The show’s colorful set displayed giant mushrooms, beautiful outdoor scenery and a bubblegum-pink tent that cascaded down from the ceiling. Festival attendees came dressed to impress and screamed for Tate while rocking platform heels, loud animal prints and neon hues.

“The aesthetic was like summer camp, but over-the-top, extraordinary, out-of-this-world,” Tate told HipHopDX.

Throughout spurts of impressive dancer-backed choreography, multiple wardrobe changes and casual struts toward the stage’s stripper pole, Tate was joined by several of her GIRLS collaborators. Mulatto, BbyMutha, Queen Key, Baby Rose and more made it to the stage, performing their own tracks and tag-teaming GIRLS cuts.

“With most shows, you have to wait for the whole show to see the artist that you came to see,” Tate explained. “So, we did it a bit different to make it a curated experience for the artists and the [fans].”

She says that same kind of perfectly-polished, louder-than-life energy can be expected on her forthcoming project. In an interview with DX, Tate details her jaw-dropping Camp performance, the new direction she’s taking with her EP, her hopes for fellow female producers and more.

HipHopDX: Congrats on your new single, “Camp.” Your Red Bull Music Festival Atlanta performance was also called Camp, so what is the significance of camp to you?

YBT: So, “Camp” is not just about summer camp. It’s also about the aesthetic of camp, like the over-the-top, extraordinary, larger-than-life type of thing. So, we mixed both of those for the show. And that’s basically what the song is, the EP and the show.

HipHopDX: You dropped your debut album GIRLS earlier this year. You went in a different direction than your BOYS EP in terms of having a lot of features — in particular, lots of dope female artists. For your next project, do you think you’ll want to include several collaborations again or go back to the solo route like you did with BOYS?

YBT: So, for Camp, there’s no features on this EP. But I’m definitely looking to do more collaborations with my next project ’cause I just really enjoy working with like talented and dope artists. I think that they bring something more to the song and to the project as a whole. So yeah, the next project for sure. But Camp is all me!

HipHopDX: Do you have a release date in mind yet for Camp?

YBT: I don’t have a release date yet; it’s still a lot in the works.

HipHopDX: Is there anything you can tell us about it?

YBT: It’s going to be next-level. I think I bring a certain level to the things that I do, so definitely on this project it’s gonna be very next-level and something new that I haven’t really done before. But it’s fun. For right now, I’m focusing on “Camp,” the single, and that’s basically the idea of what the EP will be.

HipHopDX: What was being a part of the Revenge Of The Dreamers III and the Dreamville writing sessions like?

YBT: The Dreamville session was the first time that I’ve been in a collaborative songwriting environment. That was the first time I’d ever written for someone else, so it was a really dope, very fun experience. Kind of like a challenge — not like it was hard, but something to kind of build off of.

HipHopDX: Are you signed to Dreamville or still independent?

HipHopDX: Do you prefer the flexibility of being independent or are you ready to join a label?

YBT: I do enjoy it, but I think that when you want different results you kind of have to do things a little differently. And I want very large results, so I’ve kind of got to do a large thing. Being independent is cool. It’s like you can kind of do what you want, but I think I’d like a change.

HipHopDX: Several of the artists you brought to Camp — Baby Rose, BbyMutha, Kari Faux, Mulatto, Queen Key and UNIIQU3 — were also on your GIRLS album.

YBT: Yeah, it was the first time I’ve been able to get everybody in the same space! So that was really exciting.

HipHopDX: Was it your first time collaborating with them on GIRLS? Are you pretty tight with all of them now?

YBT: Yeah, I think that was the first time I have collaborated with everyone. I’m definitely very tight with Kari Faux, that’s one of my very good friends. But all of them are my good friends! Kari is kind of like my sister at this point.

HipHopDX: Not only do you write, rap, sing and engineer, you also produce. How and when did you learn to make beats?

YBT: I learned to produce my own beats when I was 10. There was like a guy at my church who was a producer and a rapper, and he asked me one day if I wanted to learn how to make beats, so he just taught me. After that, I didn’t go back to making beats until I was 13, and then from there, I’ve just been creating music.

YBT: For sure. I feel like that can change though with more visibility. Women producers, I think that there are a lot out there, but people don’t know about them. Like even with me, people know me as an artist, but I also produce my own beats. So, I think I’ve pushed that door a little bit wider.

YBT: I just wanna say, to my fans, thank you because I love them so much and they’re so supportive!