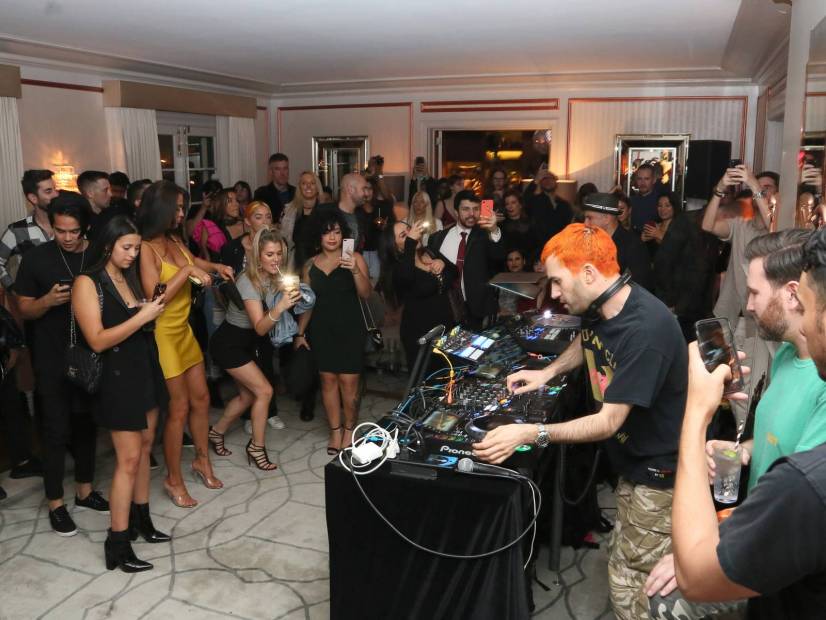 Los Angeles, CA – The art form of DJing has a long-standing history rooted in innovation and creativity. The act of DJing has time and time again undergone revolutionary leaps forward, starting with late radio DJ Jimmy Savile, who is labeled the host of the first dance party in 1943.

With advances from pioneers like Grand Wizzard Theodore, inventor of the scratching technique, to Grandmaster Flash, a forefather in the Hip Hop DJing aspects of cutting, mixing and scratching, to today’s open-format DJs— DJing has consistently mutated. And with new technologies emerging, the DJ landscape is bound to change, for the better, once again.

Now, through the strategic working partnership of veteran electronic music online store Beatport and record pool DJcity, comes yet another innovation in the form of an open-format DJ streaming platform dubbed Beatsource.

New hits and timeless throwbacks, curated by respected DJs from around the world. 🌎 Explore the #Beatsource public beta. (Link in bio)

At the launch event, held at the private residence of Jonas Tahlin, CEO of Absolut Elyx, in the Hollywood Hills on Wednesday (October 23), HipHopDX got the opportunity to speak with the CEO of Beatsource, Brian “DJ Quickie” Wong and renowned DJ, producer, and label executive A-Trak. The pair dished about the new platform and how they plan to disrupt the professional DJ scene forever.

HipHopDX: Congrats on the Third Annual Goldie Awards DJ and beat battle competition, how was that?

A-Trak: I’m good man, I’m just happy and grateful and amazed at the talents. It couldn’t have been better, it was amazing.

Goldie Champs! Here is @lioncladbeats’s winning set and @astrallbass’s runner-up performance. The former is from South Korea, the latter from Colombia. This event makes me so happy. You can watch their full sets at smarturl.it/goldieawardsYT (link in bio). Congrats to the winners but also congrats to all the participants!! Entering a battle and going up on that stage takes a ton of courage. All the other sets will be up next week too. 🏆🏆🏆

HipHopDX: I saw in a recent interview you said, “Genre specific stores don’t reflect the DJ Landscape anymore.” Describe to me how you came to be in an advisory role for an open-format platform for DJs like Beatsource?

A-Trak: I’m honored to be on this board alongside people like Brian and all his colleagues who have been doing a really amazing job running both DJcity and then the Beatport guys, too. You know I’m really impressed with the way this whole team has predicted and anticipated where things are going to go as far as the needs for DJs with both the evolutions in record selections and genres and all the technological changes. I think they are ahead of the curve and they’re going to bring solutions that a lot of DJs haven’t even realized they are about to be in need of.

Wanna see the winning sets from @goldieawards?? We just put the 1st and 2nd round sets from @djadmc (winner) & @beastmodekilledit (runner-up) on YouTube! 1st round = 5 mins each, 2nd round = head-to-head, 2x 2 mins. They killllled it! Tomorrow we’ll post the beat battle winners. It’s all so inspiring. 🏆🏆 smarturl.it/goldieawardsYT (link in bio!)

Brian “DJ Quickie” Wong: For the longest time, companies like ourselves, like Beatport and DJcity, They do the same thing, right? They deliver music to DJs. But they do it to two different audiences. And we’ve existed in the same space, but never collaborated or competed with each other, really, and it is kind of amazing. So this partnership with Beatport and DJcity makes so much sense, in that aspect. And now, as music is progressing, I don’t really know why we treated these things so separately, do you (nudges A-Trak) — like why were all the dance DJs getting all of their music from Beatport and all of the Hip Hop guys, if you want to call it that, were getting their stuff from record pools?

DJ A-Trak: And even what I’ve observed as a sort of — I’m kind of like a third party, a middle man between the two camps (Beatport and DJcity). I’m here to sort of provide input from the rest of the DJ scene and kind of give my viewpoint that is informed by all of my touring and everything. But looking at these two groups of partners one thing I have noticed is, you know DJcity, on one hand, has been great with the grass-roots side of the operation already for years — they have an amazing network of DJ’s and real support on the ground.

"The open-format DJ community has needed a home where we can find all the music we need, curated by like-minded people we respect,” says @atrak. #Beatsource public beta launches soon. 🚀 Hit the link in our bio to get updates. 📥

A-Trak: And I think, on the other hand, Beatport has really nailed the operations and the tech of running a store. So I am seeing the marriage, and I see it makes total sense — and then I am happy to just sit at the table with these guys and say, ‘Oh, by the way, let’s make sure that we address a, b and c that I think is also missing in the marketplace,’ I’m just trying to fill in the gaps. But these guys are doing an amazing job already.

Brian “DJ Quickie” Wong: A-Trak brings a great perspective because he comes from both worlds and he can seamlessly go between both worlds — he can perform at a festival with all of these dance music people, and then he can also do a Hip Hop club or anything, he could do an event like tonight where it is just a bunch of DJ’s playing good music, whatever you want. And it doesn’t matter what kind of music it is he’s just going to play music.

HipHopDX: Beatport has been incredibly innovative in regards to distributing music to DJ’s, and now Beatsource and Beatsource LINK have the opportunity to be innovative with regards to giving unparalleled access to music directly to DJ’s by sort of adopting a streaming format. Can you describe why it made sense to develop these products and release them together?

Brian “DJ Quickie” Wong: Yeah, I mean, I think DJ’s may be really ahead of the curve as far as music and creativity — being the first to jump on new music. But a lot of times with DJ’s, in my opinion, they get comfortable with the technology they are used to using. So, DJ’s were just comfortable with playing vinyl records for the longest time, until presented with a solution that was far better than that and the value proposition of that had to be much better than the other solution which is, ‘Well, you don’t need to carry these giant crates of records anymore,’ that was like a no-brainer for DJ’s.

Essential new tracks and certified classics, all in one place. 🔥 Explore the #Beatsource public beta. (Link in bio)

Brian “DJ Quickie” Wong: Now for LINK, which is basically DJ streaming with DJ performance software, that one — this is the problem we have to solve together. While everyone is streaming music, DJ’s are still physically downloading MP3’s, saving it to their hard drive, putting it onto a USB disk and physically inserting to — it’s an outdated way of doing things and LINK is the kind of solution we are trying to develop to improve that whole process. We’re not there yet, but we have the roadmap and with people like Lane kind of directing us, I think we’ll be able to solve it, with this great team.

DJ A-Trak: Yeah, we’re just a couple months away on that — and the only thing I will add to that is, you said one word that gave me an idea, you said something about independence and independent labels getting a platform, and that is one of the things with both Beatport and Beatsource. Although, on most of the other destinations and platforms to get music, whether it be the DSP’s, like Spotify, Apple Music, or the iTunes store, or whatever — there are a lot of politics that have to do with what music is showcased and there are a lot of major label releases that get pushed in front of your face and that doesn’t really represent or reflect the type of music that DJ’s want to shop for.

Get your crates ready for #Halloween with our #HipHopHalloween playlist. 🎃💀👻 Link in bio.

A-Trak: And Beatsource is so curated by people who are from the DJ scene themselves, for what the DJs needs are, it’s not a question of — there are no playlists, there are no majors that are getting real estate above the indies, if there is a record that DJ’s need to hear, the team at Beatsource makes it visible to the DJ’s. So I think it takes away from the politics that have really risen a lot in the last two-three years since the rise of streaming — streaming has brought a lot of this, playlist related shenanigans and Beatsource is putting the focus back on music and what do DJ’s need to hear.

HipHopDX: Can you tell us a little bit about how the team at Beatsource plans to bridge the different genres and worlds existing in the current DJ landscape with this platform?

DJ A-Trak: Well, Beatsource caters to the open-format DJ, I think nowadays the majority of DJs out there are open-format. The Beatsource and DJcity team has the best curation squad and pretty soon we are going to be opening it to other DJs to make their own playlists like guest playlists from established DJs. As soon as we launched the public beta a bunch of my DJ friends hit all of us like, ‘yo can I make a playlist,’ so it’s catering to open-format DJs and all the genres of music that DJ’s actually want to play.

What will you play? ▶️ Explore the #Beatsource public beta. (Link in bio)

Explore the public beta version of Beatsource on the official website here.