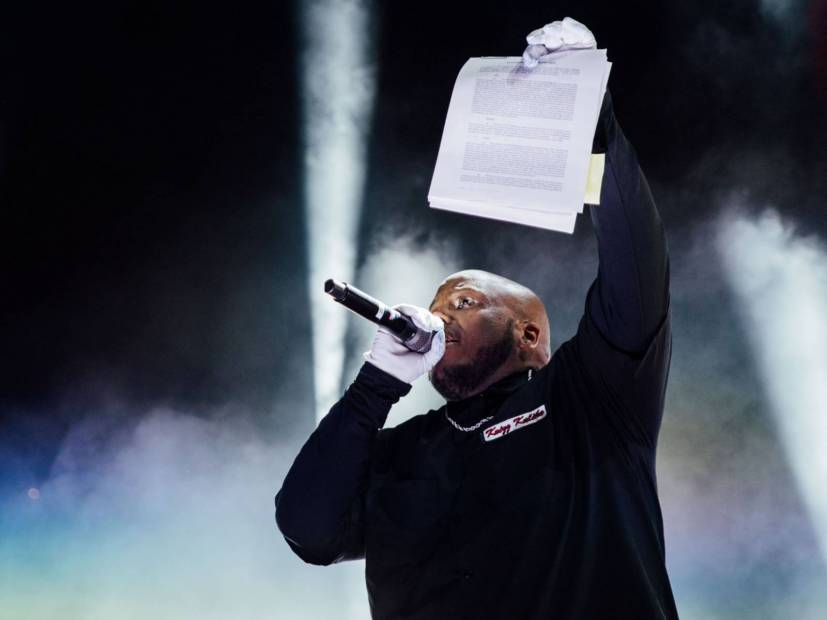 Krizz Kaliko Explains Decision To Stay With Strange Music: "It's More Than Business"

Morrison, CO – Strange Music, Inc. isn’t simply a label — it’s a family. Founded by Travis O’Guin and Tech N9ne in 1999, the Kansas City, Missouri-based imprint has become one of the most successful independent rap ventures of all time.

On Saturday night (October 19), a sold-out crowd funneled into Red Rocks Amphitheater in Morrison, Colorado to witness the Strange Music family in action. It was intended to be the final show of the year featuring both Tech and flagship artist Krizz Kaliko, who is never too far away if Tech is on the bill.

Earlier this month, Krizz — or Kali, as he’s often called — shocked his fans when he insinuated his time with Strange Music was up. O’Guin later confirmed with HipHopDX that Krizz was indeed severing ties with his longtime label.

But during an emotional speech, Krizz blindsided everyone — even O’Guin and Tech — when he re-signed with Strange Music in the middle of the show.

There wasn’t a dry eye on stage.

“I never seen him [O’Guin] cry like that,” Krizz told HipHopDX backstage. “I knew it was going tear everybody’s ass up — not that I tried to do it. I knew that’s what was going to happen. I know how emotional I’ve been about it. I’ve been bawling for two weeks straight.”

Krizz’s wife, Crystal Watson, deserves a lot of the credit for his decision to stick with the label. Not only did she support him through all the ups and down, but she also made it clear he simply couldn’t quit.

O’Guin, who sat in the green room with a gobsmacked look on his face, looked on quietly as Krizz further explained his decision — which frankly, nobody saw coming.

“It wouldn’t be the same, but I actually wouldn’t be the same without this either though,” Krizz said. “I even had some meetings with other labels and I just couldn’t see it. We’re already at step 2,000. One, I don’t want to start at step one and two, they just don’t run like how we run. There’s a reason why all of these majors are contacting Trav and looking at this blueprint. These are big, huge labels that have been around way longer than Strange Music. We’ve been around 20 years. They’ve been around way longer than that and they’re looking to us for guidance.

“Business-wise, that’s not something that you step away from and we have such a — dare I say — incestuous relationship because it’s more than business with us. We spend holidays together, we go on vacation together. When I met him [O’Guin], his daughter Mackenzie Nicole was like one. She doesn’t know anything but us.”

The GO mastermind added, “My wife and I broke up for years. They were watching me go through all of this turmoil. It’s just so much bigger than business. I went back and forth a million times and we both talked about it. It just wasn’t anything I should step away from. This was the right choice and I’m 200 percent happy.”

Krizz admitted there was actually a moment where he considered working for a custom car shop and leaving rap behind, which Watson said she couldn’t even picture. So why did he toy with the idea?

“When you set the bar for yourself right here and you’ve gotten to right here (points to middle), you feel like you’re just stuck there,” he explained. “This is a frustrating place to be. There’s a million reasons why this happened. I saw a fan saying they loved me. That was beautiful. But I saw other fans saying, ‘Well, did you buy a shirt? Did you buy a hat? Did you buy CDs when CDs were selling? Did you buy a ticket? If you really love him, I don’t think he would have even gotten into that situation.’

“Not that I don’t think they love me, it was just that it’s easy to see Krizz Kaliko as he just ‘comes with the building.’ I think we all took it for granted. Me, too. I’m just always here and it seemed like I was always going to be here. But in my head, I wasn’t. I hadn’t gotten to the bar that I had set for myself and I felt like maybe it was time to look at some other things. We have a mutual friend and he owns this huge custom car wheel and tire shop in Kansas City. I was like, ‘Man, maybe I should just go work there.’ On everything. I was just fed up with everything and thought maybe it was time to walk away.”

Spent half of my life with this guy here. Doin what I was born ta do. Thanks for all the years bro 😢@therealtechn9ne

In the days following Krizz’s revelation that he was leaving Strange Music, he was inundated with comments on social media from people begging him to stay. Watson said he needed that.

“He just said toward the end, ‘I don’t want to keep leaving,'” she said. “‘I don’t want to keep missing first days of school and being a part of the PTA and things like that.’ I told him, ‘This is you though. This is what you was born to do. This is the talent that God has blessed you with and you can’t take that voice away from the fans.’ I don’t know if you’ve seen all the comments and things like that on social media, but he needed to hear those things. He needed to see it.”

Watson said they would read the comments night after night, just crying. “It definitely reinvigorated my purpose,” Krizz said.

O’Guin chimed in with, “Me and this guy talked for just north of 30 hours of meetings. We meet a lot. We talk a lot. We talked about a lot of things. He talked about some other stuff he wanted to do and voiceovers, stuff like that. When you put everything into something and you don’t get out what you expected, I get it. I constantly battle. I work 14 hours a day still today.

“I’ve had some of the same feelings like, ‘Fuck this.’ There are times when you just want to say, ‘Fuck this. I’m cool. I can do something else.’ I understand what it means. The first eight years we did this, I was at every single show.”

“You get into the business thinking, ‘Oh wow, this is going to be great and we’re going to make a bunch of money,'” he said. “Then what happens during the process of it is the money takes a huge backseat to the impact you have on people’s emotions and well-being — like the music Tech does and the music especially that Krizz does because you’re turning everything inside now. When people go through a lot of mental issues and mental instability, they oftentimes feel like they’re the only ones that feel that way.”

Krizz added, “The thing we have in common is emotion.”

O’Guin, who was just as surprised by Krizz’s reinvigorated commitment to Strange Music as everyone else, looked at Krizz and said, “You could have told me before [the show]. I’ve been getting my ass kicked [on social media] for weeks, bro.”

He did offer, “I wanted to say something about it, but I was like, ‘Let me just leave it alone and see if it dies out.’ I did just feel like, ‘Please, please leave him alone.’ I thought it would just go away on its own.”

Throughout this process, O’Guin did learn that blocking people feels “fucking amazing.” Before he had to leave, O’Guin stunned Krizz when he told him, “I didn’t get to tell Krizz about the InGrooves thing. We have four different charting categories that we get an update on daily. You’ve owned all four of them over the last two weeks.”

Krizz was noticeably in disbelief, tears welling up in his eyes. All he could say was, “Wow.”

At the end of the day, Krizz is grateful he got a chance to see just how impactful his music is to his fans.

The future looks bright for Krizz. He has the full support of O’Guin, Tech and everyone at the label. O’Guin just wants him to be himself.

“The only thing that I’ve said to him is do whatever the fuck you want to do,” O’Guin explained. “Don’t ask anyone their opinion. Go back to doing solely what you want to do and whatever it is, we’re going to be there to support and push the shit out of and make a big impact. If he does that, that’s going to make my job easier. If he tries to do something that’s maybe not exactly in-pocket and does something where he’s trying to fit into something, that’s where we go left and crash and burn.

“If he actually does exactly what he wants to do, it’ll make my… I hope he does that because it would make my job so much fucking easier because that’s the music that connects, that’s the music that’s going to move and make a difference with people. You just spent weeks reading comments about how it connects.”

Krizz confirmed, “That was the determining factor. Comments literally made me go, ‘You know what? I’ve got to see this through.'”

Moments before Krizz headed to the door, he confessed his wife literally saved his life. There were times he wanted to leave this earth.

“I’ve told her two huge things during our relationship,” he said. “I told her I don’t even know if I’m supposed to be married and I don’t know if I’m even supposed to be alive anymore. I don’t want to live. And she was telling me the most gangster shit ever. I don’t even remember everything, but I know one of the things she said was, ‘That’s not fair. We need you. These two little boys need you. The world needs you.'”

And evidently, the world does need him. There’s a sense Krizz finally believes that.