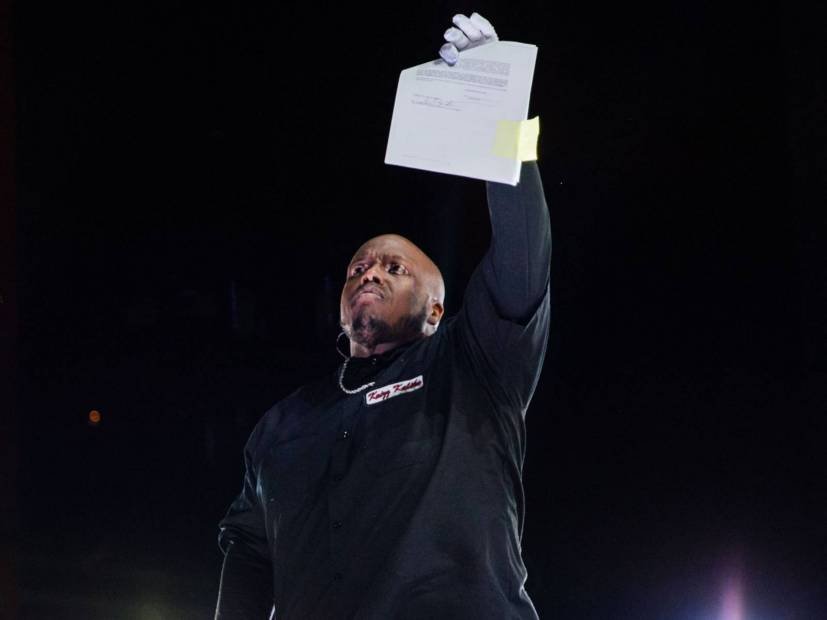 Morrison, CO – The Strange Music camp descended on the Red Rocks Amphitheater in Morrison, Colorado for a sold out show on Saturday night (October 19).

During what was intended to be Krizz Kaliko’s last performance of the year (and possibly ever) with Tech N9ne, Kali shocked Strange Music CEO Travis O’Guin, Tech and the entire Red Rocks crowd when he announced he’s decided to stick with the longstanding Kansas City imprint, the same one he’s been with since 1999.

It was an undeniably emotional moment for everyone involved. Krizz, Tech and O’Guin all shed tears as he explained his decision.

“I read your comments, man,” Krizz began. “Y’all had me crying like a bitch. I ain’t lyin’. I cried, man. I’ve been back and forth on this shit for years. I know y’all know I haven’t put anything out since GO. I haven’t put out any music for like three and a half years, man. I was fucked up, man. I ain’t gonna lie. My children miss me, you know what I’m sayin’, but y’all are also my family so I had to explain this shit to you y’all. I’m gonna be honest, man. I’m here to serve the world, man.

“I’m a servant of this planet. I know that, man. You told me for years that I saved your life. Y’all saved my life, for real. I would not be shit. I was a funny, fat-looking kid from Kansas City that they told would not make it. The guy that even put me and Tech together said I would have to put makeup on my face and I’d have to lose weight and y’all accept this fat, funny looking motherfucker, man. Thank you so much for all of these years.”

Spent half of my life with this guy here. Doin what I was born ta do. Thanks for all the years bro 😢@therealtechn9ne

Krizz continued, “One more thing, I went into a depression — I know you heard the music, it’s not fiction — Travis and Tech gave me a contract to sign years ago. They were gracious enough … I’ve still been rockin’ with Tech all this time with no contract for the last three and a half years; just a handshake. That’s my brothers. My family’s been missing me, man.

Soon, the crowd started to chant “Kali” in unison while Krizz admitted he was considering walking away from it all.

“Not only did I decide to leave Strange Music, but I started doing voiceover work,” he said. “I actually got a big role coming up. But I decided to even quit music, man. I felt like, ‘Fuck everybody for not getting the message.’

At that point, Krizz’s wife Crystal Watson took the stage rocking an adidas track jacket, red heels and a matching red purse. With tears welling up in his eyes he said, “Let me tell you what she said. I told her I was quitting. She said, ‘There’s no fucking way you can quit.’

Krizz then asked her, “Did you bring what I told you to bring?” On cue, she pulled out several sheets of paper and handed them to Krizz.

“This is the contract that Travis and Tech gave me three years ago,” he said, noticeably choked up. “I went back and forth like a motherfucker. Fuck that. I knew if I was going to make any decision like this, I had to do it in the place that’s given us the most love. I don’t give a fuck what nobody says. This place has given us more love than anybody in the fuckin’ world!

As the crowd roared with applause, Krizz continued, “This is the contract they gave me. I told them that I was not coming back, but y’all are my fuckin’ family and I want to sign this fuckin’ contract in Denver, man!”

Tech paced behind him in the background, pounding his chest as a symbol of gratitude and wiping tears from his face.

Finally, Krizz and his wife embraced as Tech walked over. The two longtime collaborators hugged and Tech yelled, “Make some noise for the newest member of Strange Music! Big Krizz Kaliko!

O’Guin confirmed Krizz was leaving Strange Music in an exclusive statement to HipHopDX earlier this month.

It clearly took everyone by surprise that Krizz had changed his mind. O’Guin, who had to endure weeks of hateful comments on social media regarding Krizz’s departure, told DX at the Red Rock show the contract Krizz was holding in his hand was actually dated 2017.

With Krizz officially back on the Strange Music roster, new projects are definitely on the horizon.

Check back with DX later this week for an exclusive interview with Krizz and O’Guin about the sudden turn of events and watch the full video below.