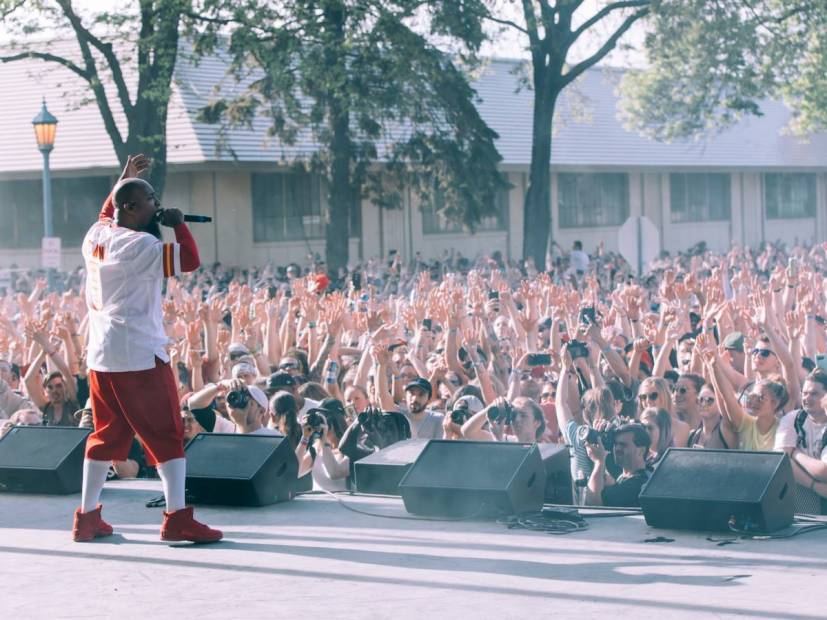 St. Paul, MN – As an artist who has successfully melded genres into his own unique sound, Tech N9ne gets love at any festival he plays, but at a Hip Hop festival put on by fellow independent powerhouse Rhymesayers, he’s Beyoncé.

Tech, along with his ace Krizz Kaliko, brought his usual nuclear energy to the stage at this year’s Soundset Festival despite being caught in a tornado the night before in Oklahoma.

After the show, HipHopDX chased the Strange Music rhymer-in-chief down and the first thing we had to talk about was a single Instagram post by Dwayne “The Rock” Johnson.

On 4/20 you dropped the video for “Like I Ain’t” and The Rock posted it on Instagram, and even wrote out some of the lyrics in the caption. What was the impact of that one social media post?

So many followers after that. That’s my brother. I had no idea that him posting it like that [would have that kind of effect]. You know, I sent it to a lot of rappers too and they didn’t post it. E-40 did. That’s my kinfolk. I can’t say who the other artists I sent it to cause it would make them look like “what?” But The Rock posting the video was a big push. All I can say is thank you brotha!

Toured with the Jay Rock, with the homie K Dot Like I didn’t have a lay lock Like I never went on the set of Ballers with Mr Baywatch. Appreciate the shoutout from my uso @therealtechn9ne. The most successful underground and independent artist of ALL TIME. Been rockin’ with him and @strangemusicinc for decades now. We share the same DNA – once you’ve been hungry, you’ll never be full. Highly recommend his new album #N9NA available now if you’re ready to get hyped. #AlwaysHungry #NeverFull #N9NA #StrangeMusic

Has there been any talk between the two of you about a possible collaboration of some sort?

I met him for the first time on the set of Ballers last year. He said, “I don’t know what we’re gonna do but we’re gonna do something.” Hopefully, it’ll be either Ballers or a movie where I get to be performing “Riot Maker.” Ideally, it will be in a setting like at a concert where there’s a fight in between the song or something. That’s his favorite song so I’d love to do something like that.

I think we’re all still mourning the late Nipsey Hussle who, like yourself, showed what’s possible on an independent level. He had a lot of reverence for you. What do you remember about your first time meeting him?

In 2009, Nipsey was in Lawrence, Kansas. Invited me in his trailer that he was riding in. We was on tour with Game. We went 45 minutes from Kansas City down to Lawrence, Kansas to see Game. We didn’t see Game, we saw Game perform. Game was so drunk off of vodka that he didn’t get to talk to us afterward. After Nipsey went on he saw me outside and was like ‘Tech N9ne! Respect man, come on up here.’ Me and my people got up on the bus and kicked it. I was just with him last year at the Victory Lap release party in New York at Sweet Chick. That was where we took the picture I posted when he passed.

Why do you think this one hurt more than normal for Hip Hop and for his community?

This one hurt a little extra cause he had so much to offer and so much drive and was going the right direction with Dr. Sebi’s law. He could have helped so many more people, but he’s still helping people. He left a mark, a big one. We don’t’ give a fuck about no Crip or Blood shit, we was together. We didn’t care about the different sets, red or blue. It’s a loss. It’s a loss for the world, it’s a loss for Lauren London and the kids.

Mental illness is real that’s why me, Jellyroll and Krizz Kaliko did “Easier For You.” It’s crazy out here, but it’s love out here too. We have to rise above. Where we are now, Soundset, it’s love but out in the streets, you gotta be careful where you walking. Yeah, we started in the hood but the idea is to get up out the hood and help the hood. When you go back to the hood and you got a steak in the middle of people that’s hungry it can get treacherous. Ain’t nobody safe. You gotta be careful, watch where you walk and keep your loved ones close.

You made it here today despite getting caught in a tornado. Is that something you’re used being from the Midwest?

I’d never seen a tornado in the 48 years I’ve been living in Kansas City. We had just performed at Rocklahoma right before Korn and after our show we were getting ready on the bus, getting our clothes ready to take our SUV to our hotel room so we could get on a plane to come here. We were in our SUV and we had to pull off. The siren sounded. “Get out, take cover, code red. Go to the main stage.” We sat on the main stage ’til 2:15 am. We went on at about 9:55 pm, we got off about 11:30 and we didn’t leave ’til 2:15 dog. Krizz Kaliko and I were checking it out. We generally think everything’s funny but that night it got real.