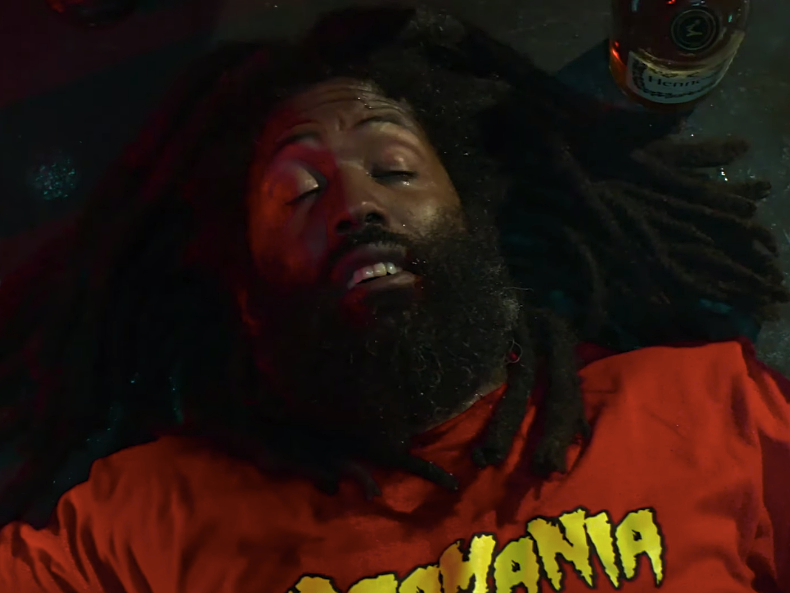 Los Angeles, CA – Murs’ next album, The Iliad Is Dead and the Odyssey Is Over, drops Friday (August 9). Ahead of its release, the Living Legend has unveiled a nearly 14-minute mini-movie to complement the project.

Rocking a red “Mursamania” t-shirt, the short film begins in a desolate warehouse where Murs and a muscle-bound fighter wielding a massive chain are about to fight. As Murs is about to get pummeled, someone throws him a bottle of Hennessey and another of Hpnotiq, which suddenly give him superpowers.

The scene is all set to “The Hulk,” one of the new tracks on the 9th Wonder and The Soul Council-produced album.

From there, the cinematic visual highlights “My Hero,” “Fuck Them, “Cancun 08” and “Gas Station Gucci Belt” in a myriad of creative ways.

“I’ve always loved comic books, cinema and Hip Hop,” Murs said in a press release. “This video was a chance to combine all three. The first time I created a short film was for ‘Walk Like A Man’ off of me and 9th’s first album. It was fun and very well received. I’ve wanted to do something similar for years, and now seemed like the perfect time!”

Murs also described the short film as being a labor of love and admitted it was “expensive as fuck” — but totally worth it.

“When director Justin Marmostein sat down to discuss the visuals for this album, we knew this is what we had to do,” he explained. “We created superheroes like myself (‘The Hulk’) and Alexis (Nikki Narcos), the protagonist of my song ‘My Hero,’ which was inspired by Cyntonia Brown and her case [Brown was released from prison on August 7 after having her life sentence commuted].

“Making this mini-movie a reality was fun and expensive as fuck. All 50-something of us cast and crew members worked our asses off to make this film a reality. 9th and I hope you all enjoy the film as well as the album that inspired it.”

The Iliad Is Dead and the Odyssey Is Over follows last year’s A Strange Journey Into The Unimaginable.

Revisit the recently released “High Noon” below and pre-order the album here.