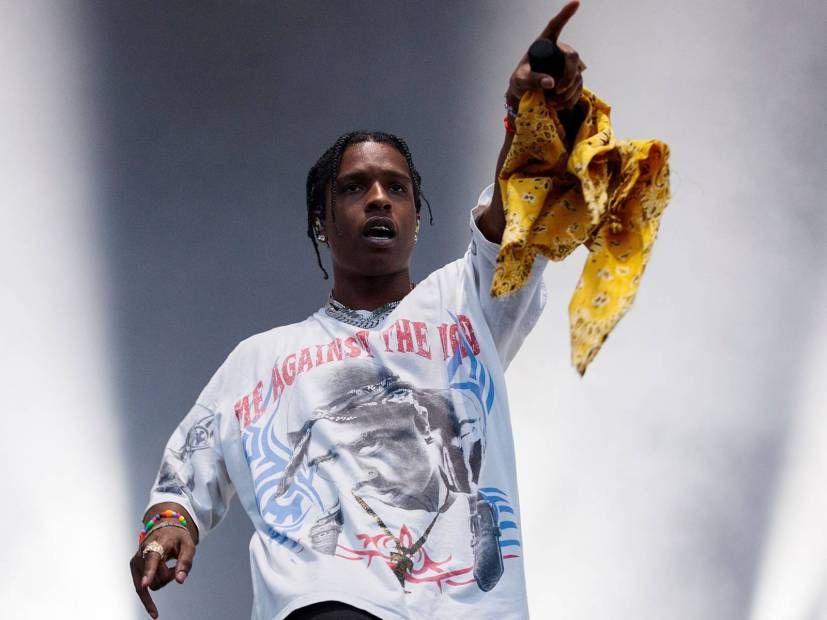 A$AP Rocky and two members of his entourage were found guilty in a Swedish courtroom on Wednesday (August 14). But despite the verdict, the A$AP Mob co-founder won’t have to serve any more time behind bars.

According to The Washington Post, Rocky was ordered pay a fine to alleged victim Mustafa Jafari in the amount of SEK 12,500, which amounts to roughly $1,300 in U.S. dollars. During the hearing, a judge concluded the charges against Rocky weren’t as serious as presented by prosecutors and required no more prison time.

“This act has not been of such a serious nature that a custodial sentence is something that must be chosen,” presiding judge Per Lennerbrant said.

Although Rocky testified he acted in self-defense, the court found no evidence to support his claim. They also determined there wasn’t enough proof that he used a glass bottle as a weapon during the melee.

“Based on statements from two witnesses, the court finds that the defendants were not subject to a current or imminent criminal attack,” the court said in a statement. “Therefore, they were not in a situation where they were entitled to use violence in self-defense.”

Lennerbrant added “the prosecutor has not been able to prove that the victim was struck in the back of the head with a bottle or that he was in any other way assaulted with bottles. This has affected the assessment of the seriousness of the crime.”

Rocky was facing up to two years in jail for the June 28 incident, but his temporary release after the trial ended on August 2 indicated he would be found not guilty or sentenced to time served. It turned out to be the latter.

Following his release earlier this month, Pretty Flacko expressed gratitude for all the support he received while he was in jail via Instagram.

“THIS HAS BEEN A VERY DIFFICULT AND HUMBLING EXPERIENCE I WANT TO THANK THE COURT FOR ALLOWING ME BLADI AND THOTO TO RETURN TO OUR FAMILY AND FRIENDS,” he wrote in all caps. “THANKS AGAIN FOR ALL OF THE LOVE AND SUPPORT.”

THANK YOU FROM THE BOTTOM OF MY HEART TO ALL OF MY FANS, FRIENDS AND ANYONE ACROSS THE GLOBE WHO SUPPORTED ME DURING THESE LAST FEW WEEKS I CANT BEGIN TO DESCRIBE HOW GRATEFUL I AM FOR ALL OF YOU THIS HAS BEEN A VERY DIFFICULT AND HUMBLING EXPERIENCE I WANT TO THANK THE COURT FOR ALLOWING ME BLADI AND THOTO TO RETURN TO OUR FAMILY AND FRIENDS THANKS AGAIN FOR ALL OF THE LOVE AND SUPPORT

[This article has been updated. The following was published on August 2, 2019.]

A$AP Rocky will be allowed to leave the Swedish prison he’s been holed up in for last four weeks. On Friday (August 2) — exactly one month after Rocky’s arrest for an alleged assault — a judge ruled he could go home until the next trial date.

According to British freelance journalist Maddy Savage, who was in the courtroom during the proceedings, the A$AP Mob member has 12 days until the verdict will be handed down.

“#ASAPRocky judge says verdict will be announced on 14 August 2019,” she tweeted. “The suspects DO NOT need to remain in custody until then.”

#ASAPRocky judge says verdict will be announced on 14 August 2019. The suspects DO NOT need to remain in custody until then

Savage also tweeted Rocky and the other two defendants are allowed to leave the country during this time.

“#ASAPRocky’s lawyer has just told me the suspects do not need to remain in Sweden while they await the verdict,” she wrote.

#ASAPRocky’s lawyer has just told me the suspects do not need to remain in Sweden while they await the verdict. https://t.co/1riuiyNhOt

TMZ reports prosecutors are recommending six months behind bars, a year-and-a-half less than the maximum sentence of two years.

[This article has been updated. The following was published on August 1, 2019.]

A$AP Rocky was back in a Swedish courtroom on Thursday morning (August 1) and was asked to take the witness stand. During his testimony, the currently imprisoned rapper recounted the moments leading up to the alleged assault.

In audio of Rocky’s testimony obtained by TMZ, the A$AP Mob co-founder explains how hard he and his entourage tried to pacify the situation. He also insists he never broke a bottle, which appears to be the focus of case.

“We saw bottles on the floor and we picked them up,” he says. “We didn’t want them to get the bottles. We didn’t want them to have them in their possession. At that moment, some African girls came over and they decided to help and try to mediate the situation. They disregarded that too … what the young ladies were saying. We asked the girls to call the cops because we didn’t know the number to 9-1-1.

“I didn’t break any bottles. I put it on the street, but I can’t say specifically because it was a month ago. I’ve only been to that location once in my whole life. We were further up when we put it back down. The guys were by where the police car is, so I just put it back on the ground.”

From there, Rocky says that’s when his bodyguard walked down the block to ask the girls to tell the alleged aggressors to leave them alone.

“These guys were following again,” he continues. “As far as the bottle goes, I held it momentarily because I realized it was stupid, especially when they didn’t have it in their possession. It wasn’t necessary for me to have it so I put it down. I couldn’t help but assume that these guys were under the influence of some type of drugs. We don’t want to provoke these guys, we just want to diffuse the whole situation and get away from these guys.”

Rocky says he only jumped in once he felt his crew was being threatened. He admits he kicked and punched the alleged victim, Mufasa Jafari, but it was an act of self-defense.

“Me and the crew start to tell them go the other way,” he adds. “We don’t want no problems, we don’t want no beef … their behavior was really weird. We didn’t know what to expect and it got a little scary for us.

“We ask these guys calmly, I even put my hand on their shoulders in a peaceful way so I wouldn’t pose as a threat. We pleaded and begged them. We said look man we don’t want to fight y’all. We don’t even want problems. We don’t want to go to jail … Please stop following us. At this moment, both of these guys attacked.”

Rocky later made an emotional plea to the judges, saying, “I have spent a month in Sweden. This is my 5th or 6th time here. I have seen the most beautiful architecture. And the not-so-nice things … what I want is justice. I want my name to be cleared. Justice for all of us.”

The multiplatinum-selling artist was arrested on July 2 after turning himself in to Swedish authorities and promptly pleaded not guilty. If convicted on the assault charges, he’s looking at two years in prison. However, prosecutors have divulged they won’t seek the maximum sentence.

[This article has been updated. The following was published on July 30, 2019.]

A$AP Rocky was in a Swedish courtroom on Tuesday (July 30) to face assault charges, according to TMZ. The A$AP Mob founder’s mother, Renee Black, made the trek to Stockholm to support her son and had to fend off reporters and photographers as she approached the courthouse.

During the proceedings, Rocky’s attorney Slobodan Jovicic entered a plea of not guilty on his client’s behalf. He maintains Rocky acted in self-defense and referred to alleged victim Mustafa Jafari as a “storyteller.”

Jovicic plans to interrogate Jafari when it’s his turn to take the witness stand on Thursday (August 1). Jovicic said in court Rocky neither kicked nor punched Jafari as he was on the ground. He explained Rocky only took action when he felt his bodyguard was being threatened.

Reporter Oscar Schau, who was in the courtroom to cover the hearing, said Rocky sat silently and watched Jafari as he gave his testimony. Jafari testified he believed Rocky and his entourage were going to kill him. He also claimed since the incident he has recurring nightmares and the injuries to his hands have left him unable to work.

Jovicic says Rocky’s legal team is expected to call two witnesses to the stand — the bodyguard and another person who “saw something interesting.” He believes Rocky has been living under a “dark cloud” of this case and his team feels confident there is video footage other than the initial street fight to paint the entire picture.

Rocky was arrested on July 2 after turning himself in to Swedish authorities. In the wake of the arrest, several of his peers have showed their support for the celebrated rapper, including T.I., Tyler, The Creator and ScHoolboy Q.

If convicted, Rocky could face up to two years in prison, but prosecutors have revealed they won’t seek the full sentence if he’s found guilty.