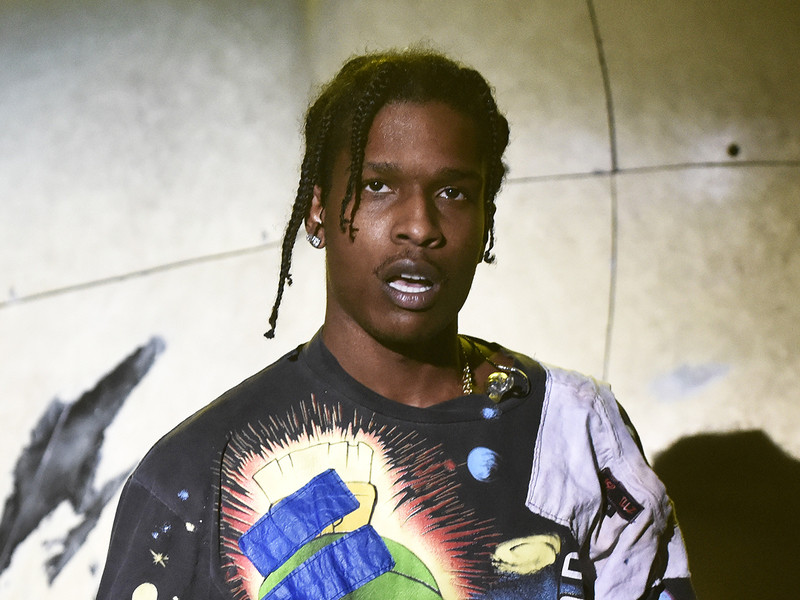 A$AP Rocky Charged With Assault, Will Remain In Swedish Jail

As anticipated, Swedish prosecutors have charged A$AP Rocky and two members of his entourage with assault.

The decision was handed down on Thursday (July 25), according to NPR. In a translated statement, the city prosecutor’s office said the three men had been charged “for the abuse of a person near Hötorget,” a city square in central Stockholm.

“Together they have handed out blows and kicks against a lying person,” prosecutor Daniel Suneson said in the statement. “[T]he plaintiff has been injured on the arms, among other things.”

The incident occurred on June 30 while Rocky was overseas to perform at Smash x Stadion, a two day Hip Hop festival in Sweden’s capital city. He maintains it was self-defense and provided video of the confrontation on his Instagram account, showing the alleged victim following his crew.

The Hollywood Reporter states Suneson explained he had access to a “larger amount of material than what has been available on the internet” and judged Rocky’s actions to be a crime.

Rocky’s Swedish defense lawyer, Slobodan Jovicic, said he was “not surprised” by the decision but was “extremely disappointed” prosecutors chose to give testimony of the alleged victim more weight.

TMZ reports Rocky’s charge could get him locked up for up to two years, but Suneson said he will not recommend the full two-year sentence if Rocky is convicted.

During the trial, which will likely start next week, a panel of four judges will hear the case. At least three of them must decide an assault was committed for a conviction. If it’s a tie, the prosecutor is allowed to ask for a new trial. If Rocky is convicted, a judge will decide the sentence a week later.

[This article has been updated. The following was published on July 19, 2019.]

A Stockholm judge has reportedly ordered A$AP Rocky to remain in jail for roughly another week while prosecutors continue to investigate the alleged assault. TMZ reports the ruling was handed down on Friday (July 19) and appears to signal the A$AP Mob rapper will be indicted.

Rocky’s lawyer, Slobodan Jovicic, says it’s “unjust” to hold his client although prosecutors deemed him a flight risk. Jovicic says Rocky would never risk his career and flee due to his status as an international rap star.

Jovicic believes the most his client should get is probation considering there’s video of the alleged victim attacking Rocky and his crew. Rocky also tried to de-escalate the situation.

Rep. Adriano Espaillat says Swedish authorities are using “KGB tactics” by keeping Rocky locked up and thinks it’s likely they will indict him.

Authorities are expected to make the final decision next Thursday (July 25).

The Testing architect was arrested on July 2 and has already been behind bars for over two weeks. Several of his peers have started a Swedish boycott as a result.

[This article has been updated. The following was published on July 5, 2019.]

A$AP Rocky’s arrest is slightly more serious than originally thought. According to TMZ, the A$AP Mob rapper could remain in a Swedish jail for at least two weeks as prosecutors determine whether to charge him with aggravated assault.

Swedish police are normally only allowed to keep a person for three days.

Rocky was arrested on Tuesday (July 2), two days after the alleged assault. The vicious beatdown was captured on video and shows Rocky and members of his entourage pummeling a man in the street.

In a separate video posted by Rocky, the alleged victim is seen following them. He was reportedly upset over a pair of broken headphones. But, the man supposedly broke the headphones when smashing them over Rocky’s bodyguard’s head.

Rocky could face up to six years behind bars if convicted.

[This article has been updated. The last version was published on July 3, 2019 and can be found below.]

Stockholm police have reportedly arrested A$AP Rocky on suspicion of aggravated assault. TMZ reports police can hold the A$AP Mob rapper for up to three days while prosecutors determine how to charge him.

Three other people were also taken into custody — two on suspicion of aggravated assault and one for suspicion of assault — but their relationship to Rocky is undetermined.

The incident took place on Sunday (June 30) after two groups of men allegedly got into an argument over a pair of broken headphones. But according to a roughly three-minute video Rocky posted, it appears the man broke his headphones when he smashed them on the head of Rocky’s bodyguard.

Although Rocky attempts to squash things, a fight ultimately broke out and Rocky jumps in. In the Instagram caption, Rocky says the men followed them for four blocks and “were slapping girls butts who passed.”

He could face up to six years in a Swedish prison if prosectors move forward with the charges.

[This article has been updated. The original version was published on July 1, 2019 and can be found below.]

A$AP Rocky and his crew were apparently involved in an altercation while overseas. In video obtained by TMZ, the A$AP Mob rapper gets into a heated altercation with two men at a Max restaurant in Stockholm on Sunday night (June 30).

The reason for the argument was allegedly over a pair of broken headphones.

Sources reportedly say the two men kept following Rocky and threatened to call the cops over the headphones. Someone stepped in to translate the argument between the two group of men and Rocky issued an ultimatum — stop or else.

A woman interrupted the conversation and accused one of the two men of grabbing her inappropriately. Witnesses say at that point Rocky and his entourage decided to attack.

During the fight, someone smashes a bottle and three other men jump in to join the beatdown.

After Rocky and his friends fled, an ambulance and cops were dispatched to the scene. Police took statements from the witnesses at the scene.