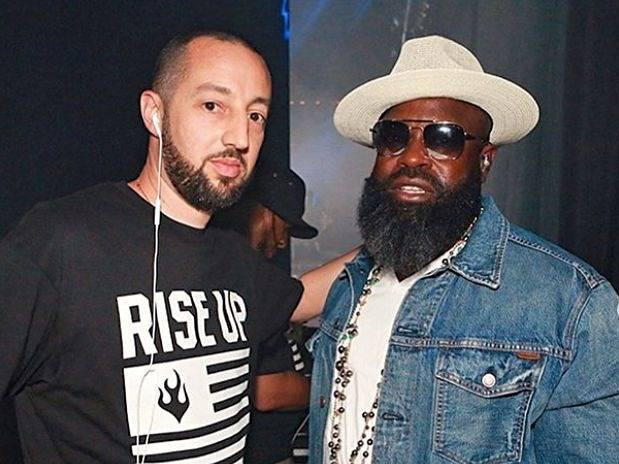 How A Sleep-Deprived Black Thought Ultimately Led J. Period To "Rise Up"

New York, NY – Enamored with classic Hip Hop films such as Krush Groove and Beat Street, mixtape king J. Period moved to Brooklyn from his hometown of Los Angeles in 1999. At the time, the DJ scene was in full bloom and he slid right into the thick of it.

“Even growing up on the West Coast I just had a New York Hip Hop sensibility,” Period tells HipHopDX. “That was what I listened to. I didn’t listen to West Coast Hip Hop as much until I moved away and realized everything that was just in my bloodstream from being out here.

What Period couldn’t have predicted was his close relationship with The Roots, which started to take shape in 2006.

“I had done the Nas mixtape and landed in The Source hottest mixtapes section, which led to the Big Daddy Kane mixtape,” he explains. “The Lauryn [Hill] mixtape took things to another level, where I started getting hired by the label to do them as promotional pieces.

Questlove was so impressed with what Period was able to pull out of a sleep-deprived Black Thought, their collaborative relationship really started to blossom after their first studio session.

“My idea was to get exclusives, drops and other interview clips to tell a story,” he says. “With The Roots, I basically had one session in the studio with Black Thought who hadn’t slept for like two weeks leading up to when we recorded because they were on such a crazy promo run.

“Questlove was so amazed that I was able to extract the gem that I got out of him for that mixtape, and I think he just so appreciated the way I summarized their catalog that I earned some respect.”

From there, Period invited Black Thought to the Brooklyn Hip Hop Festival to recreate the mixtape live.

“It was as Brooklyn as they come and then here comes Philly,” he says. “That was the first seed for my relationship with Thought. The show went so well. There was a promoter from this Toronto music festival called The Manifesto. He invited us to come up there, and that was really the very first place where we did the live mixtape in the beginning of its current form.

“Questlove was always giving me props for the mixtapes. He’s given me the greatest quote of all time, where he says, ‘J.Period is the most creative mixtape producer of all time.’ He put that in an email and I was like, ‘Yo, can I actually tell people that you said that?’ That has led to me to all other things and now to the point where I’m producing my own album It’s been a crazy ride for sure.”

The Man. The Myth. The Icon. ・・・ Grateful every time I share the stage with the GOAT. 🙏🏼🔥🔊 @blackthought #TheLiveMixtape 📸 @photorobnyc

Fast-forward to 2019 and Period has performed countless shows with The Roots. In May, he dropped The RISE UP Project, which boasts features from Pharoahe Monch, De La Soul’s Posdnuos, Xzibit, Maimouna Youssef, Sa-Roc, Joss Stone, Aloe Blacc, dead prez and, of course, Black Thought.

“His research was phenomenal,” M-1 of dead prez tells DX. “He started doing mixtapes for some my favorite artists like Lauryn Hill, Mary J. Blige and The Roots. After that, he asked me to be a part of one that he was putting together and that was the first time we actually worked together. I found him to be more than a mixtape DJ. He was more like a producer-curator.”

“See The Light” featuring Andra Day and dead prez was one of the 10 tracks from the album that received the video treatment. It’s also one of few Hip Hop visuals that features people meditating, which was stic.man’s manifestation.

“We were talking about all the forms of resistance,” Period says. “A big part of what The RISE UP Project is about is what are the ways that you can rise up and/or resist? It could be through meditation.

“I think part of what we’re trying to do as this thing evolves is really make it about everybody’s individual responsibility to do something. Whatever it is, it’s your thing to do, something you can contribute, and you should be mindful of it.”

Period continues, “One of those things stic was saying is meditation and how it’s not always about resisting with violence. That some of it is like centering yourself.

“He loved that idea of having him either rapping or just perfectly still meditating during his verse. So, that became one of the central things I think there and it looks dope too. It’s different. You don’t see that.”

Like the tireless creator he is, Period has more on the horizon, including his own solo album, which began to unfold at one of DJ Jazzy Jeff’s infamous Playlist Retreats.

“I got really inspired by my experiences at the Playlist Retreat,” he says. “That really has pushed me to want to extend my repertoire and be as serious about it as I am about the mixtapes. So, it’s taken me a while, but I feel like a style has started to evolve and it’s a lot of improvisation based off the vibe that’s created by these incredible musicians.”

In the meantime, Period plans on releasing a run of 12″ vinyl records featuring “See The Light” and “Soldiers.”

Check out The RISE UP Project below and explore his mixtapes here.