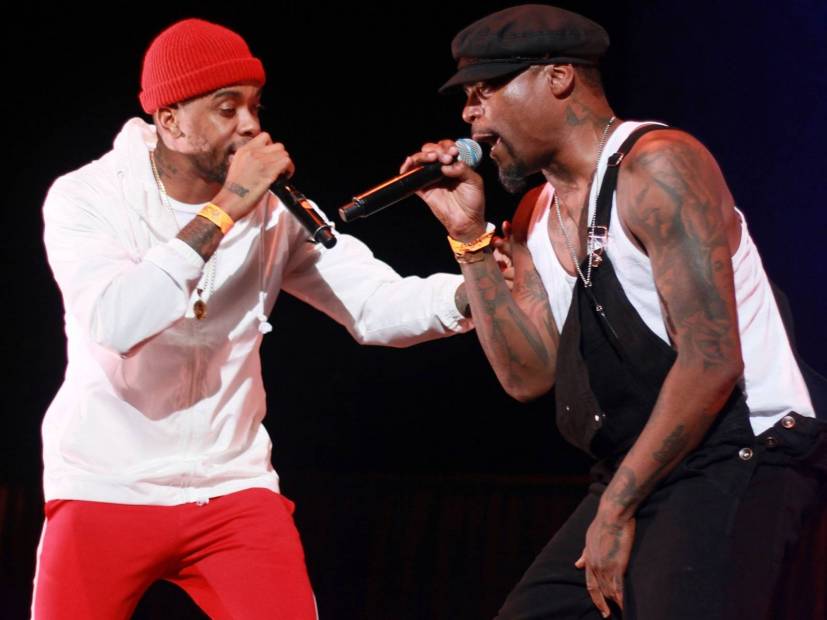 Bigger Than Hip Hop: How dead prez Is Improving The World

dead prez has been encouraging their fans to “be healthy” since their inception. In fact, that phrase is a song title off M-1 and stic.man’s 2000 magnum opus Let’s Get Free and one not consistently heard in Hip Hop.

Since their days of tossing apples into crowds and encouraging people to eat better, M-1 and stic have maintained their mission to bring wellness and positivity to the world — albeit nearly 20 years later, the message looks slightly different.

Last month, the seasoned Hip Hop duo teamed up with mixtape king J. Period to deliver a video for “See The Light” featuring singer Andra Day, which is taken from The RISE UP! Project.

At one point in the visual, people sit silently with their eyes closed as they meditate, a rarity in Hip Hop videos. But stic had a very specific vision he wanted to execute, and once Period and M-1 heard about it, they were all in.

“I was having a conversation with J. Period,” stic explains to HipHopDX. “When he told me the first initial idea of the video, I understood it was set in kind of a destitute warehouse like something in The Hunger Games. Here I am, 45 years old and 16 years ago, it was let’s tear everything down.

“I know to a certain extent that’s what my earlier music represents, but I’ve learned. I’ve become a running coach, martial artist and meditator, and I understand that missing piece. So, we’re targeting the new generation and taking that message moving forward.”

In this specific case, stic, M-1 and Period are delivering part of their message through music. While in the past, dead prez was screaming for a revolution and joining Public Enemy in their “Burn Hollywood Burn” mentality, now they’re suggesting other ways to yield that same powerful result.

“I want to be true to my experience and give you the best wisdom I can give you today and not just kind of tell you the idea of actions, Hollywood, revolutions from the synagogue, you know what I mean?” he adds. “If you can harness that energy and that righteous rage in a way that doesn’t become toxic to you, then you can actually focus as a group to get things done with compassion, clarity and wisdom. That’s going to be more powerful than burning anything.”

M-1 agrees, which is unsurprising. The Brooklyn native has released several guided meditations over the years, including M-1’s “Free Up! Meditation Series,” as well as a book tentatively called M1’s M1ndful Meditative Guide to Prevent You From Becoming ‘PLATINUM BROKE RAPPER.’

“His idea was that he didn’t even want to be seen rapping, he just wanted to be seen meditating the whole video, which is stic,” M1 tells DX. “He meditates and it works for him. It’s also been a part of my regimen and my tool kit for alignment and energy conservation in certain kinds of ways when needed. I use meditation as a tool. I’m happy he did do it because it does represent some of my ideas as well.”

Refreshingly, M-1 and stic back up their words with action. stic is the mastermind behind RBG Fit Club, which promotes healthy living through five principles: knowledge, nutrition, exercise, rest and consistency. Along with his wife Afya Ibomu, who is a nutritionist and author, the longtime vegan teaches members how to optimize their health. And he says anybody can join.

When asked if Hip Hop could see a shift from the sometimes destructive directives in mainstream rap to rapping about more holistic ways of living, stic says it’s already starting. He plans to continue leading by example.

“A lot of Hip Hop artists are making the shift privately, right?” he says. “There are a lot of sober Hip Hop artists. Kendrick Lamar, 50 Cent and Royce Da 5’9 are all sober. Ace Hood is super in shape. He’s got a program called Shredded. Coach Nym from our label RBG Fit Club Records is a personal trainer and he just dropped a whole album called Healthy Gangsta.

“There’s a shift that’s coming. We’re doing what we call ‘Fit Hop.’ Like Healthy Gangsta and my [2011] album The Workout, we call that ‘Fit Hop.’ Some of the artists that I listen to who are amazing artists don’t talk about these things necessarily in their work. I feel like it’s because they don’t have an example. A lot of Hip Hop is about being something cool, being something fresh and original, and then you just say, ‘Oh, I could do that.'”

In addition to the RBG Fit Club, stic is also an ambassador for the Champion Fathers movement.

“One of my passions is fatherhood, so we partnered with a brand called Champion Father,” he explains. “We do workshops around the skill set of fatherhood. We just try to be a place where fathers can feel not judged, plus get support in this fellowship with other fathers who are just trying to make it happen and need our support.

“There are a lot of myths about fatherhood — that fathers are absent everywhere or that there’s no dads anywhere. There’s so many fathers that are excellent and have experience to be shared. So, Champion Fathers is a verb meaning to champion, to encourage, to support fatherhood. I’m a passionate ambassador for that brand.”

Did you know the english word Father is linguistically related to the German word “Vader” ? … yep, like Darth Vader lol Darth Vader wasn’t such a good example to Luke Skywalker lol but maybe he can inspire us to lean more to the good side than the bad ?May the force be with you! #championfathers

Meanwhile, M-1 is raising five (FIVE!) daughters ranging in age from one to 14 and doing community work around women’s issues. He believes “the time is now.”

“I think more so than ever, it’s time for men to support women’s leadership,” he says. “To be a part of a truly transformative process is completely inspirational and revolutionary. Maybe one day that will make it to music, but I more think it’s about the action. To actually be present for women is the most important thing for me to do.”

Part II of the J. Period and dead prez interview to follow.