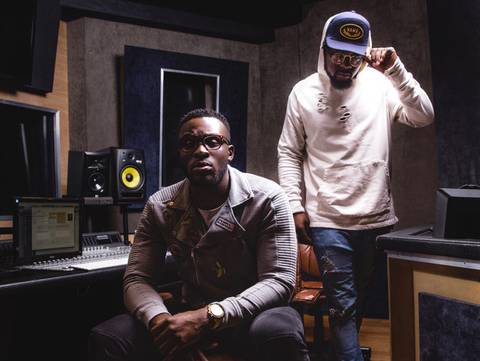 Courtesy of Sons of Sonix

North Hollywood, CA – Mikey Akin and Mo “Mo-Keyz” Samuels make up British Nigerian production duo Sons of Sonix. They have worked with plenty of American superstars such as Ariana Grande and Ty Dolla $ign as well as huge UK artists such as Stormzy and Wretch 32.

Right now, Mikey and Mo have a plan to infiltrate the American market with the Afrobeat sound by tapping in with the biggest recording artists of our time.

They’ve learned a lot from Grammy Award-winning songwriter Poo Bear (known for being the production magic behind Justin Bieber’s career) so as a result, they’re able to create the kind of music that sounds sweet to the American ear.

“Do what you love and give them what they like,” Mo-Keyz told me during a conversation at the award-winning producer and songwriter Harmony Samuels‘ North Hollywood studio. Mo also happens to be Harmony’s brother and before our conversation really got deep, they went back-and-forth over a record that two A-list singers were fighting over. That’s how impactful Sons of Sonix’s packaging as a production duo is.

If you live for people’s acceptance, you will die from their rejection. We choose life over here. #FullSpeed

These guys are adamant that Americans listen to music differently than the rest of the world. The key is simplicity and they learned the ends and out of making their native Afrobeat sound dance with American Hip Hop from Poo Bear.

“He kind of like helped change our whole view on creating records and the importance of the song,” Mikey recounted. “I remember one of the first sessions with him, we came in with the mindset of, ok we’re working with Poo Bear let’s have the beat ready. We’re going to go in there and smash the production and he told us it was about the song. What we do with Poo Bear is we make it about songwriting. He makes it about the art of the song. What’s the song saying? What’s the melody? Is it straight to the point?…I’ve got many writers that I love but Poo Bear just understands simplicity and melody.”

“He’s got a message. The message is a strong message,” Mikey revealed.

“I feel like he’s going to be someone that is going to change the trajectory of how young people look at God,” Mo added. “I think it’s really important that it’s coming from him because it’s Justin.”

Mo and Mikey have been around The Biebz since he was young and recall him looking up to Chris Brown in a major way. It shouldn’t be surprising that Justin idolizes Chris Breezy, however. In May, Bieber compared Chris to the late Michael Jackson and Tupac Shakur.

“Justin was this young kid who’s basically idolizing Chris Brown,” Mo remembered. “When he was working with Chris, he came into the studio and was basically just watching Chris Brown. Literally, everything that Chris did…you know Chris is a performer even when he’s just playing songs. Chris could play songs for hours and he’ll perform it. You got to understand, Justin is looking at him like you are the epitome of what I’m trying to be. Seeing him go from that to discovering himself and finding his purpose and changing his sound I think one, you can definitely hear the growth and two, for us it’s a privilege to be a part of the growth and be part of this new Justin that the world is about to see.”

Mo and Mikey both find Justin’s growth to be inspiring. For now, they’re using their innovative techniques to create songs for their upcoming project like “Full Speed” by Verse Simmonds.

“The new project is a mixture of sounds and a mixture of cultures,” Mikey explained. “It depicts what Sons of Sonix is all about. We’re not confined to necessarily just one thing. We have Afro, R&B, Trap, everything. It’s a collision of different sounds. We’ve been working on it for the best part of two years ago. It was one thing before and I guess as we kind of started growing our sound and working more. The palate kind of changed and the sound kind of changed also.”

BJ the Chicago Kid, Wretch 32 and Stormzy are all expected to make an appearance.