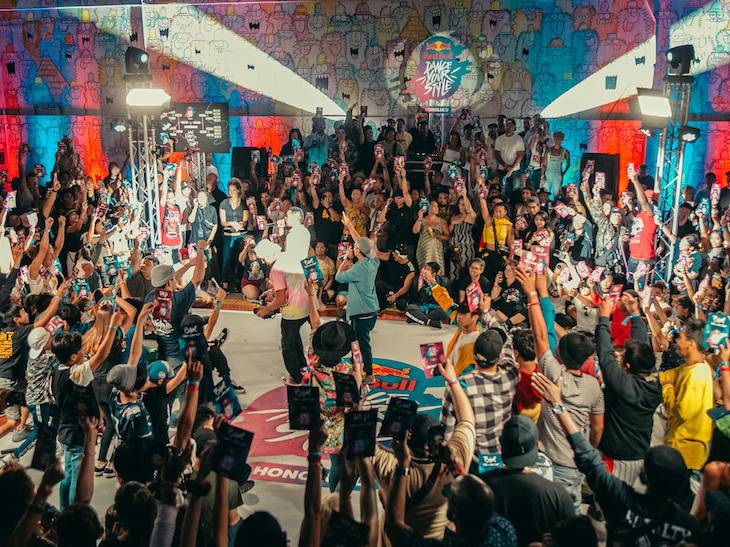 Honolulu, HI – The saying goes, “Never underestimate the heart of a champion” but it should also include the athlete in general.

Which best describes the competitors HipHopDX witnessed during the Red Bull Dance Your Style Honolulu on June 15: athletes.

Beforehand, I sat silently as the athletes discussed their various injuries and how those fancy headspins we all love can potentially result in whiplash, joint and muscle pain and even the possibility of shifting a body part out of alignment.

It was then I was reminded that this entire movement was a faction of the so-called real Hip Hop era. They were putting on for the culture at all costs and bring us a damn good experience in the process.

Believe it or not, the surrounding calm of Hawaii’s light breeze, gentle sun and abundance in good eats only went so far in settling the nerves … or edge I should say. The Honolulu Edition of RBDYS including a healthy succession of vets: Joe Stylez from Las Vegas, Nastyray from San Francisco, Do-Knock from Las Vegas and Hazmat, Headache HiJack, and Soul all representing their home court of Hawaii.

From the onset, the gloves were proverbially off, even though their smiles were apparent in the dance arena (making for top-notch showmanship). Hoards of fans and yes, real Hip Hop supporters packed the Kaka’ako Warehouse Event Space, each clutching on to red and blue voting cards as each dance battle was decided on a majority rules basis.

Given the heavy amount of talent and professionalism, I can honestly say that no sole battle was a unanimous decision. Joe Stylez bested fierce challenges from the likes of Toshi and Soul but ultimately lost to HiJack. Likewise for Sheopatra, who recently elevated her visibility by body jamming during Kanye West’s recent Sunday Service phase. Her precise pop-locking also got her to the semifinals over impressive showings from J. Boogie and EQ yet she ultimately lost to Hazmat’s aerobatics.

Which delighted the Hawaiian crowd to no end. There were no losers here; only winners and the ultimate winner. Hell, there were bonuses — shout out to the traditional fire dancers!

In the end, there were two and Hazmat and Hijack literally put it all on the line, and even flexed uncanny skills by going off on the guitar riffs of Metallica’s “Enter Sandman,” opposed to the more traditional b-boy go-to tracks that were played such as House of Pain’s “Jump Around” or Zapp & Roger’s “Doo Wa Ditty (Blow That Thing).” (The DJ was aiming for a video game final boss level setting with that selection!)

After a nearly five-minute vote, it was decided that Jack “HiJack” Rabanal was the victor for the RBDYS: Hawaii as the competition prepares for Washington, D.C. come July 20.

“Winning in my hometown definitely felt much different than winning abroad because of the support from family friends and community,” HiJack tells HipHopDX. “Ain’t no pride like Hawaii Pride!”

Despite making it look effortless, going all out in four dance battles will take the toll on the body and the war wounds were apparent.

“Wear and tear for me after the match was a sprained wrist, and a pulled back and glute muscle, but the pride that we kept the win here in the islands where it belonged,” an unapologetic HiJack continued. “And I appreciate that the crowd was involved for this event. Personally, for me, I enjoy when the crowd can get involved because it creates a vibe for the room, people want to be there when they feel involved and important.”

Follow Hijack on Instagram @hijck to chronicle his journey as the challenges get tougher. For more information when they’re coming to a city near you, lock into the official RBDYS website and check out more photos from the Honolulu Edition down below.