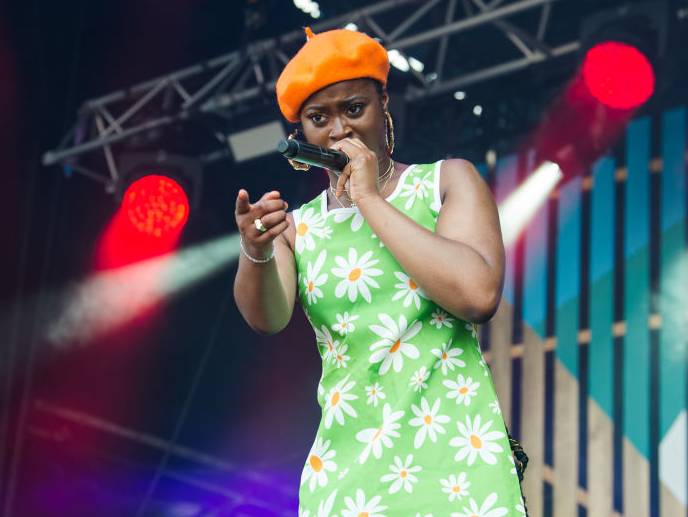 St. Paul, MN – When it comes to covering music festivals, some of your best interviews happen on the fly and with no time for preparation. This was the perfect set of circumstances for me to catch Tierra Whack in the artist’s area at the 2019 Soundset Festival in St. Paul, Minnesota.

She had just finished her set, which unfortunately was at the same time as DMX’s performance on the other side of the Minnesota State Fairgrounds. I love Tierra Whack but anytime I see DMX perform live, I know it may be the last time so I catch his set (a decision that even Whack said was the right call).

As I spoke to the Whack World visionary, I quickly realized that, much like her music and tweets, her answers to questions were quick and concise. The full extent of how entertaining this interview was may not translate all the way in print but it was an unforgettable experience and in the interest of authenticity, here is the full, unedited convo with Tierra Whack.

HipHopDX: In a recent interview, Flying Lotus said he wants to do an entire album with you. What is your response?

Tierra Whack: He can do whatever he wants with me.

HipHopDX: What would be the title?

Tierra Whack: Whatever he wants it to be.

HipHopDX: Can you talk about ——

Tierra Whack: You want some? [Offers me Flamin’ Hot Funyuns]

HipHopDX: Are you giving me the rest?

Tierra Whack: No! But you can get a few.

HipHopDX: I did not know they made Flaming Hot Funyuns. [I cough as they were hotter than I expected and it hit right on the back of my throat]

Tierra Whack: Are you about to die? Don’t die during the interview. I’ll have to interview your corps.

HipHopDX: It would be so worth it. I love you like I love Missy Elliott.

HipHopDX: Yeah, and I feel like you’re on your way there.

Tierra Whack: Thank you. I haven’t even done that much. That’s so crazy.

HipHopDX: You’re Steph Curry. You changed the game with the one-minute tracks. Do you feel like you’ve changed the culture a little bit?

Tierra Whack: I guess. I just noticed that the other day, like yesterday literally. I just was like “Oh, that song’s kinda short. But I just like short and sweet things. It’s just the way everything is now. You gotta get to the point. Like, some songs I listen to, like Kanye West’s “30 Hours.” It’s called “30 Hours” and I’d like to just put it on repeat and just drive to it, and just keep going. I don’t want it to ever end.

HipHopDX: Did you ever see that mash-up of Jake The Dog’s song about bacon pancakes mashed up with JAY-Z’s “Empire State of Mind”?

Tierra Whack: What? That’s crazy. [Spills the rest of the Flamin’ Hot Funyons on herself]

HipHopDX: You should’ve let me finish them.

Tierra Whack: I really wanted the rest of them! It’s so good. It gets so hot at the bottom.

HipHopDX: You combine the visuals with the music so well. Is there another level you can take that to?

Tierra Whack: The more I travel and the more things I do, I just get inspired by everything, so it’s no telling what I’m gonna do tomorrow or next week. I just live life and let that form into some type of idea cause you’re never supposed to force it. You’re supposed to just live and whatever comes you just like “I’ma put this here” like a puzzle.

HipHopDX: That’s real. Now, your experience with festivals so far –

Tierra Whack: Like, there’s no telling what’s gonna happen to me after I leave you. I might die! Then you’ll have the last interview ever. Wouldn’t that be crazy?

HipHopDX: No! Don’t die! Though I did have the last interview with Dick Gregory.

HipHopDX: If this is the last interview, what would you like to say?

HipHopDX: Can I tell you though, the Jalapeño Cheetos are surprisingly better.

HipHopDX: Oh, well then they’re not better. My hands are relatively clean.

HipHopDX: Do you have any cool stories or collaborations that have come from the festivals you’ve done so far?

Tierra Whack: No collabs really, but, hmmm, what’s something cool? Oh at Camp Flog Gnaw I’ll never forget, SZA’s mom, she got on the roller coaster, the Super Shot, she got on every ride. You know moms don’t usually wanna do crazy stuff like that.

HipHopDX: And your equilibrium gets weaker as you get older. Mine definitely does.

Tierra Whack: Yeah, but she was so ready, so I felt like I had to be ready too, you know what I mean? So I was just like “Oh my God, a mom wants to go crazy, so I have to go crazy too.” I feel like that was one of the coolest things that has happened so far.

HipHopDX: Okay, your Twitter is fantastic, and I see you interacting with fans and artist a lot. What’s been the best Twitter interaction?

once a rapper start promoting for small cash app payments, you know they done! 😂🤷🏾‍♀️🤝

Buddy: I missed your set I’m so sorry. I was watching DMX.

[To Buddy]: I mean you had to, you had to see DMX. It’s fine. I would have did the same thing if I wasn’t on stage. I love this shirt. Where’d you get it?

Buddy: Here. I bought it. I sweated my other shit out. There’s a little free-standing –

Buddy: I’ll go back with you cause I need another one.

Tierra Whack: Yeah, let’s do it.

Buddy: Cool I’m about to say what’s up to Talib [Kweli], but just go where the march is and it’s the shit that looks tight.

Tierra Whack: Sorry, he’s really cool. He’s one of the first people to admit that he copied me. I really respect him. Did you see him?

HipHopDX: Yeah, he performed early. He was good.

HipHopDX: … I, um … may have watched DMX instead.

Tierra Whack: [Laughs!!!] [Yells to everyone around] Everybody likes DMX! I went against DMX guys, and I lost. [Laughs!!!]

HipHopDX: But here’s why: Remember you said this could be your last interview? It’d be more likely to be DMX’s last interview than yours. You never know what’s gonna happen with him, and there’s always a spot in my heart for X. I root for him always but …

Tierra Whack: Literally if my best friend was going on, I would choose DMX, you know what I mean. I feel the same way. Don’t feel bad that you missed me it’s fine.

HipHopDX: I’ll probably see your set again. I don’t know for sure if I’ll see his again.

Tierra Whack: For sure for sure. That’s a legend!

HipHopDX: I didn’t realize you were this inspired by him.

Tierra Whack: What? You know what’s so crazy. People always say I’m a wild card because I love the most gangster, crazy, and that’s why when I rap I become so hard because the people I listen to are just so gutter and hardcore. DMX, he’s like a poet. You know I started with poetry so he’s everything and people forget to include him in like, top five, top ten, whatever greatest rappers. He is the shit. DMX needs like, I want to throw him a birthday party.

HipHopDX: We need to find out when his birthday is. My main goal as a journalist is to try and source things like this into the universe. Oh, hey there’s Yasiin Bey.

HipHopDX: Oh, that is Talib.

Tierra Whack: Talib got mad at me at Coachella because I took a picture of him. But he didn’t say anything, he just looked really mean.

HipHopDX: Did you talk to him at all?

Tierra Whack: No. I’m just saying that out loud like in this interview. Ooh, look it’s G-Eazy. G-Hard!

Tierra Whack: This is all going on here.

HipHopDX: Now DMX’s birthday party, what’s that gonna be like?

Tierra Whack: Well there are going to be dogs as security — not people. Nobody guarding him, just dogs. When you approach, you have to pay the dogs in dog food. Yeah. That’s how you get near him first. You have to give me a little bit of time to think about the rest.

HipHopDX: Absolutely! But the dog thing is a really good start.

HipHopDX: This is already the greatest party I’ve ever heard of.

Tierra Whack: And when you come in you know “Pet Cemetery is gonna be playing back to back to back, and I’m not gonna tell you the rest cause then you’ll know everything.

HipHopDX: Can fans expect you to channel your inner DMX on a song?

Tierra Whack: DMX represents God, he promotes God a lot and I do that too. I don’t do it so much but DMX has been through a lot so he has to say, there’s somebody up there helping him. Somebody’s doing something for him.

HipHopDX: I channel him when I’m driving. I don’t even mean to but when somebody cuts me off I just find myself going “Grrrrrrrrr.”

Tierra Whack: Yeah, you have to. If you believe in something fight for it. He just gives you that go!

HipHopDX: Thank you for your time.

[Editor-In-Chief’s Note: Although Jake completely failed at soaking up Tierra Whack’s 2019 Soundset performance, here’s an excellent one-minute recap (go figure) of her stagetime shot and edited by Sawyer Brice. Do better Jake or you’ll be demoted to photo gallery organizer.]