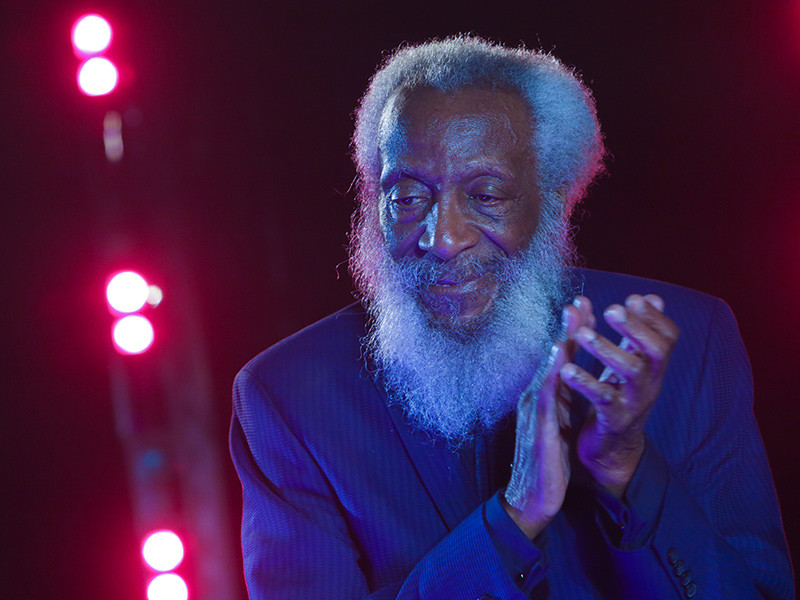 The late Dick Gregory was a brilliant and revolutionary comedian, speaker, activist and so much more. He was your favorite comedian’s favorite comedian. He stood alongside Dr. Martin Luther King Jr. and Muhammad Ali in the fight for civil rights. He inspired Richard Pryor to eschew self-censorship, a quality that would pave the way for comics like Chris Rock and Dave Chappelle to speak freely. And at the age of 84, he was still doing hundreds of shows per year and working on various other projects, including his appearance in the Black Spectrum Theatre’s “What’s Going On?”

In a previously unreleased phone interview from October 2016, HipHopDX was blessed with the opportunity to interview the legend and, unsurprisingly, he was as funny and profound as ever. The biggest surprise in the conversation was the revelation he made about his time in Atlanta, where he spent time with Killer Mike and T.I.

“I didn’t know that Atlanta was the Hip Hop capital of the world until two weeks ago [when] they all came by the show and we talked for a long time,” Gregory said with a laugh. “’Cause I don’t listen to music but I talked to Killer Mike, we talked for like 12 hours.”

U cursed me out (more than once), u cursed my rapper friends out (more than once), u broke bread with me and my wife, u gave me knowledge, wisdom and understanding free of charge and never asked anything but that I spread it as freely as u. U helped me so much in the short time we knew one another personally (3yrs). I am glad I said this to you while you where here and I proudly state again. I love u. I sincerely love u elder. Thank U for loving us. #DickGregory you left the world a better place than u found it. Love and Respect always.

The Run The Jewels MC has expressed his love and admiration for the iconic comic on more than one occasion, and according to Gregory, the conversation kept flowing. “[Mike] said ‘How much time you got?’ And I told him ‘make it easy on yourself’ [laughed]. I could’ve talked to him for four days. I said, ‘You ain’t just talking to some punk on the street. Whatever you wanna talk about let’s go!’ We started at 12 o’clock and finished up at 7 o’clock in the morning. We talked about everything. What a human being he is. T.I. and I talked for about six hours too.”

“[Mike] said ‘How much time you got?’” Gregory recalled. “And I told him, Make it easy on yourself.’ [laughs] I could’ve talked to him for four days. I said, ‘You ain’t just talking to some punk on the street. Whatever you wanna talk about, let’s go!’ We started at 12 o’clock and finished up at 7 o’clock in the morning. We talked about everything. What a human being he is. T.I. and I talked for about six hours too.”

I still remember calling you for advice on what I should be doing & how to lead the generation during these times. Same call I remember you cussing me out telling me I "ain't know shit!!!" like it was yest. An odd exchange for me to say the least but It was a blessing to meet,speak with,&learn from such an honest,iconic man of wisdom & passion like you. I thanked you then as I'm thanking you now for all of your many sacrifices for our people. Thank you for challenging us & teaching us at the same time. Your efforts weren't in vain. We'll forever remember all your contributions to the culture. Rest easy knowing you did your part. ??RIP DICK GREGORY??

While much of the older generation frowns upon the lifestyle that rappers glorify, Gregory said it would be hypocritical for him to denounce their culture when reflecting on his own actions when he was their age.

“Rhythm has changed,” he explained. “When black folks call me on like a radio show and tell me what they think about these young folks wearing their pants below their butt, I say I can’t talk about that because I used to drink a fifth of scotch every day. Do you know how many times I’d go home drunk? Do you know that’s a felony? What they do is not a felony. And another thing, there will be more old folks like me that will die in the next two weeks cause they’re hooked on sugar and salt than [young people] will die from drugs in the next five years. So you understand their addiction but you think you understand yours? And whenever they take crack or whatever it is, they don’t have to take 12-15 prescription pills before they can eat bacon.”

As for the new generation of comics, Gregory was too busy with his own schedule to listen to anybody else. And when it comes to his research, it’s the same formula that made him successful in the first place: countless hours of reading the newspaper.

“I just do my own thing,” he said. “I don’t listen to [other comics]. That’s how I became a millionaire – by doing my thing, not listening to somebody else. I do 250 dates a year. I don’t got time to see comics. I spend about $1,000 every 10 days reading newspapers so when I go on a radio show or TV show, they better be careful what they ask me ’cause I got a research team second to none. So, I just walk out on stage. 98% of my audience is white folk. They know I’m telling the truth but they don’t feel no hatred. I’m the first one that said that [Dr. King] didn’t die on the balcony. He was alive when they carried him to the hospital and they smothered him to death. That’s beginning to come out now.”

Gregory spent time with some of history’s most iconic people, but when asked about the most charismatic person he’s ever been around, he answered: Lenny Bruce. But what may have been the most surprising part of the interview was what he remembered about two men that most consider some of the most charismatic speakers in history.

“The two people that I was most embarrassed to be around were Richard Pryor and Malcolm X because they were so bashful,” he revealed. “Jesus man, when that camera came on you, better get out the way but when it went off, you couldn’t find anybody more … I’d be embarrassed to be around them. Malcolm said, ‘Yes sir, no sir’ to everybody: black folks, white folks, old folks, young folks. And Richard Pryor, when that camera went off, you couldn’t find nobody more bashful and shy than him.”

R.I.P. to the legend Dick Gregory.