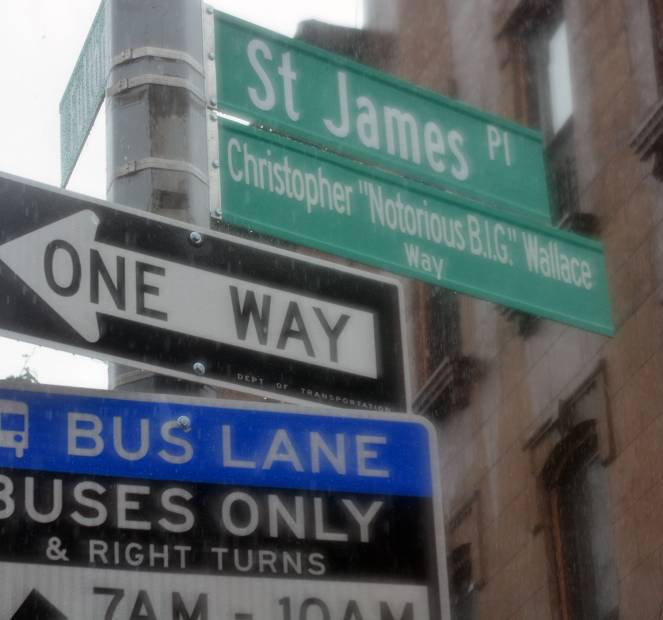 The Notorious B.I.G. Honored With A Brooklyn Street Naming Ceremony

Clinton Hill, Brooklyn, NY – Torrential rains and an unfortunate helicopter accident in nearby Manhattan weren’t enough to detract the thousands of people that showed up in the Clinton Hill section of Brooklyn, NY, to witness history in the making.

The corner of Fulton Street and St. James Avenue — once located in a redlined district — got a new name on Monday, June 10, 2019: Christopher “The Notorious B.I.G.” Wallace Way, named of course for the late, great Biggie Smalls.

The street naming was a historic event that was years in the making: B.I.G. is the first rapper of his kind to be honored in such a way, but previous attempts to name the street in his honor were shut down by activists who claimed that he was a “bad influence” on Brooklyn youth.

For City Councilman Robert Cornegy Jr. — who grew up just one floor down from the Wallace family at 226 St. James Place, just up the road from the street corner named in the late rapper’s honor — the street naming was a long time coming.

“This sign is important today — so that the history of this place is told to our children and our children’s children,” he told the crowd, echoing earlier sentiments about gentrification concerns and the rising number of black men lost to gun violence.

For activist and NYC public advocate Jumaane Williams — who admitted he was “fangirling” at the sight of some of his early 1990s Hip Hop idols — naming the street in honor of the Ready to Die rapper was as much a political statement as it was a pop culture statement. The 1960s, he said, had “Malcolm and Martin” to spread the word of black pride; Biggie and Pac were their 1990s analogs and deserved to be honored in the same way as the fallen civil rights leaders.

As was to be expected, the crowd went wild when Lil’Kim and the rest of the Junior M.A.F.I.A. stepped to the microphone to honor their fallen mentor. The Queen Bee reminded the audience that she & her comrades were the ones “shooting in the gym” with Biggie, and that even though she and the other members of the Junior M.A.F.I.A. “went through their stuff,” it was their love of Biggie Smalls that continued to unite — and reunite — them.

“This block, it belongs to Biggie,” she said. “He always had a vision, and I feel like today was part of his vision.”

But before she went, Lil’Kim promised the audience that “as long as I’m around — and until the day that I die — I won’t ever forget Biggie, and I will always teach our history.”

Before the unveiling, Voletta Wallace — mother of the Notorious B.I.G. — took to the microphone to share her thoughts, as well. While she was quick to remind the audience that the naming couldn’t go forward without her approval, she took the time to show her appreciation to the thousands of fans in attendance, as well.

“I want to thank you for standing out there in the rain to see a sign unveiled. That is love,” she said. “You out there, soaking wet? I will remember this for a long, long time.”

But, she said, she was also quick to remember that none of this would be possible if, indeed, Biggie were still alive today. Wallace made clear that the wound of her son’s still-unsolved murder was just as fresh today as it was back in 1997.

However, she said that while she still mourns her late son, she takes comfort in the love of her family (a family that includes Biggie’s son and daughter, both of whom were in attendance) and of the love Biggie continues to receive to this day.