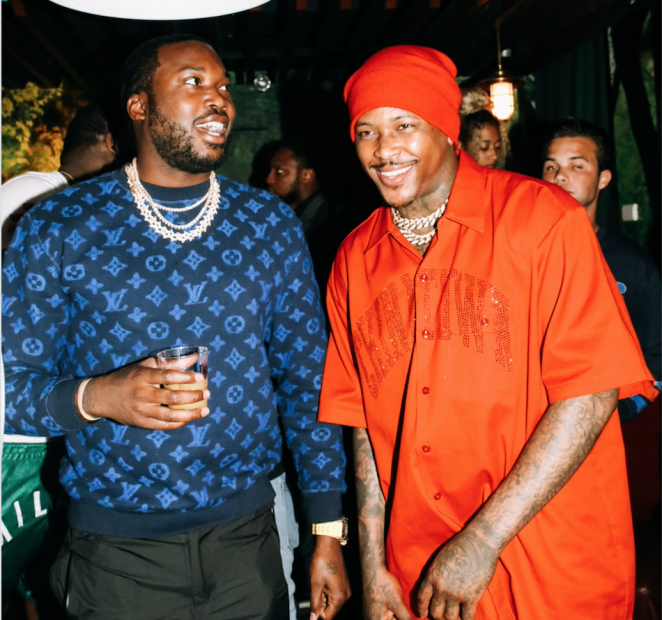 New York, NY – On Wednesday night (May 29) YG and Def Jam Records threw an exclusive listening party at the Bowlmor Lanes in Times Square to celebrate his 5th studio album “4 Real, 4 Real” which dropped May 24th. Meek Mill, Lenny S., Karen Civil and Angela Yee of The Breakfast Club all came to celebrate. Drinks were sponsored by 1800 Tequila with a drink list appropriately named after songs from the album. Directly outside tacos were served out of a truck that had YG dressed in a mariachi band suit reminiscent of his newly released, “Go Loko” music video.

Throughout the night various celebs showed up to congratulate the Stay Dangerous rapper on his latest project. His longtime business partner Civil bowled throughout the night. Angela Yee stopped by following her Breakfast Club interview that aired this morning. Others in attendance included India Love, DJ Clue, and fellow rapper Casanova.

The party really got started with Meek Mill and YG having an impromptu bowling battle. It was 4 Hunnid verses The Dream Chasers as the two went back and forth trying to get strikes over each other. Tracks from the album played in the background as attendees watched waiting to see who would win. The pair teamed up on the track “Heart 2 Heart”, which discusses the unfortunate situation of having loved ones serving prison time, which Meek has publically dealt with.

A large painting of Nipsey Hussle was at the party so it felt as if he was there in spirit. It is no secret how close YG was the Nipsey. They have teamed up on numerous songs throughout the years even though they are from rival gangs. The introduction to the album pays tribute to the late rapper in “My Last Words” which samples his speech from Nipsey’s memorial service, saying, “I wanna congratulate bro for his legacy and everything he did, all the game he gave me, all the people he touched, and for the brand he left behind,” YG said. “On behalf of the West Coast, on behalf of L.A. The streets, my nigga, we love you, my nigga. I’m gon’ miss you, my nigga, and you already know what it is.”

The night ended shortly after midnight with the Compton native proudly doing the “Blood Walk” a dance that was created by LA’s Blood gang. Check out some pictures from last night’s festivities.