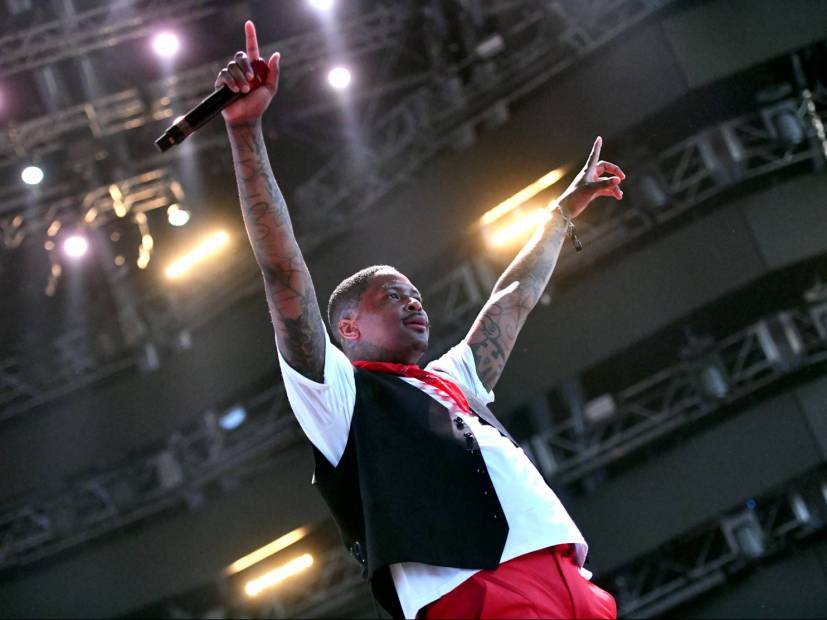 YG’s 4REAL 4REAL album is finally scheduled to drop this Friday (May 24). Ahead of its release, the West Coast rhymer has shared the cover art for his oft-delayed LP.

The project’s artwork features the message “In loving memory of Nipsey Hussle.” YG originally postponed his album’s surprise release, which was supposed to happen in April, due to Nipsey’s death.

An additional delay occurred earlier this month when YG’s LP didn’t drop on May 3, which was announced as the new release date during his performance at the 2019 Coachella Valley Music and Arts Festival.

[This post has been updated. The following was originally published on May 13, 2019.]

YG’s 4REAL 4REAL album is officially scheduled to drop on May 24. A Twitter post by the Def Jam artist confirmed a recent statement made by Karen Civil regarding the LP’s release date.

“After this album drop May 24th, I got 1 more album left,” YG wrote. “Finally bout to be a new man! The Marathon.”

After this album drop May 24th, I got 1 more album left, Finally bout to be a new man! The Marathon

4REAL 4REAL was originally supposed to be released as a surprise in April, but YG pushed the album back following the death of Nipsey Hussle.

He then settled on a May 3 release date, which came and went with no LP. Instead, YG dropped a single titled “Go Loko” and provided no update on the album’s status.

Barring any additional delays, YG’s fourth studio album will finally arrive on May 24.

[This post has been updated. The following was originally published on April 15, 2019.]

In a new interview with Billboard, the Def Jam artist’s album title was revealed to be 4REAL 4REAL. YG also spoke about why he was dropping the LP less than a year after releasing STAY DANGEROUS.

“From my first album to my second album, and from my second album to my third album, it took me two years to put out each project,” he said. “That wasn’t my choice. Life was changing: I got shot, I had a daughter. It was crazy — it took a little longer.”

YG’s 4REAL 4REAL is scheduled to drop on May 3.

[This post has been updated. The following was originally published by Cherise Johnson on April 15, 2019.]

As a wholesome gesture, YG empathetically dedicated his entire set to the late Nipsey Hussle. He praised him as the “Black Jesus” and encouraged Coachella’s massive crowd to join him in a moment of silence to honor his close friend.

The Still Dangerous rap star also told festivalgoers he previously planned to drop his forthcoming project as a surprise album earlier in April. Instead, he chose to push the original release date back so he could mourn and celebrate the life and legacy of Nipsey.

The album now has an expected release date of May 3.

“So, I had an album coming out April 12. It was supposed to come out on Friday but I got some fucked up news that my nigga had passed on me and shit,” YG said during his Boachella set. “I didn’t know how to muthfuckin’ walk or talk, I couldn’t get out the bed. I was in the bed every day until 4 p.m. My life is fucked up, my shit still fucked up. The only reason I am up here is because I been drinking a whole lot of tequila. But my nigga gone. I got to deal with the shit. So, I decided to push my album back to May 3.”

Right after his announcement, YG performed a new song for the crowd titled “Stop Snitchin.” The track seems to be aimed at Tekashi 6ix9ine for ratting out his Nine Trey Gangster Bloods associates in his ongoing RICO case.

The controversial rapper agreed to exchange information on his former cohorts in exchange for less prison time, and it seems he and his lawyers have a plan to make it happen. In total, five of his Nine Trey Gangster Blood associates have pleaded not guilty.

YG projected a huge picture of Tekashi’s mug shot on the jumbotron along with a red, “stop snitching” sign.