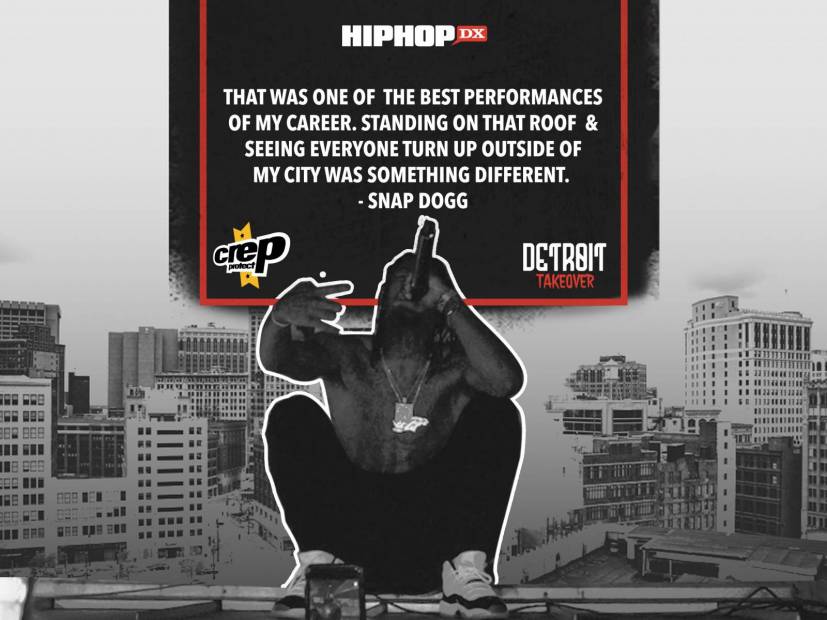 DETROITDXnew from HipHopDX on Vimeo.

🗣 Broke days, no hope days- @allstarjr2724 at the #DetroitTakeover at #SXSW✅

EMPIRE’s Vice President of Operations Nima Etminan tells DX, “It was amazing seeing all these different prominent faces from Detroit come together and support each other. My highlight was seeing rival rappers sing each other’s songs like they’re one big family.”

Trae Tha Truth, who was also in Austin for the SXSW festival, stopped by “Detroit Takeover” showcase to observe the undeniable talent on display.

@NeishaNeshae repping on #313Day on the #DetroitTakeover showcase at #SXSW

At one point, the “Problem Child Of Detroit” Snap Dogg ignited the crowd with his infectious energy when he hopped on the roof and started spitting.

“That was one of the best performances of my career,” he tells DX. “Standing on that roof and seeing everyone turn up outside of my city was something different.”

DJ Tru kept the good vibes rollin’ on the 1s and 2s throughout the evening.

The “On The Cloud” artist delivered her signature brand of R&B-infused trap music for the amped audience while actively engaging her fans.

The Motor City rapper has released several mixtapes, including Get a Bag or Go Home, Blowing The Extras and Cases Pending. He put it all out there during the showcase and surely reeled in some new fans.

La’Britney and Damedot had no shortage of gratitude for the opportunity to rock the SXSW stage.

“Much love to Empire and HipHopDX for putting together an event showcasing Detroit talent,” La’Britney. “It was so much good energy and love in the building.”

Damedot adds, “SXSW 2019 was an amazing experience for me and my camp. Coming all the way to Texas and seeing fans sing along to my music had me surprised. We appreciate Hip Hop Dx having The Mafia down in Austin.”

The showcase was packed as SXSW attendees and artists weaved their way through the crowd.

The Detroit duo captivated the audience with their own raucous set while Peezy hopped on the mic with ease. The 313 rapper recently dropped No Hook 2, his latest project.

“It was dope sharing my release week with fans in Austin,” Peezy says.

Meanwhile, FMB DZ kept the energy high with his powerful set. Several of his projects, including Ain’t Gone Lie, Washington DZ, The Gift and The Gift 2 garnered significant traction online and earned him some new fans outside of D-Town, which is exactly what he accomplished at SXSW.

Sada Baby, the only artist not signed to EMPIRE, worked his own magic and had the crowd whipping out their iPhones to document his engaging set.

And Then There’s Snap Dogg …

Of course, sneaker culture has always been an integral part of Hip Hop. With that in mind, it made sense for Crep Protect to get behind the “Detroit Takeover” showcase.  The company, which linked up with DJ Khaled for a campaign last year, has been keeping those fly kicks squeaky clean and protected since 2013 when it made its first sale.

DX wants to thank Crep Protect for their support at SXSW. Check out their wide variety of products here.