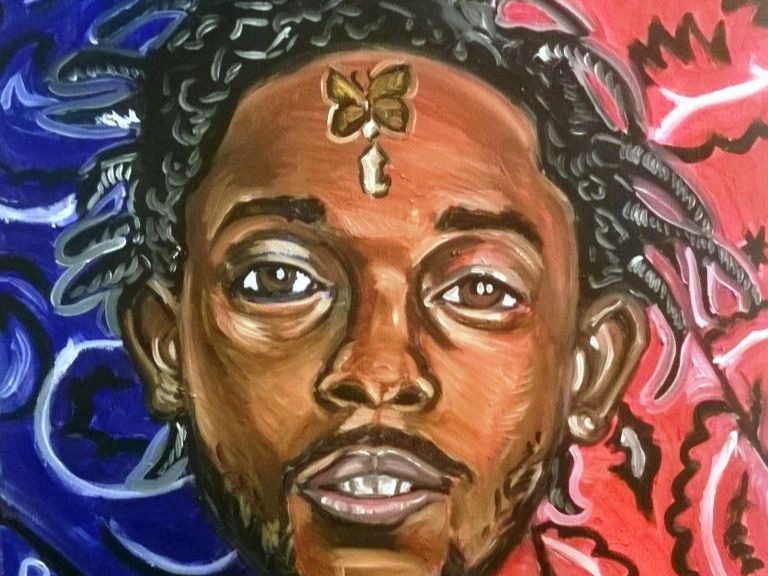 Columbia, MD – It all started with “You Know My Steez” from Gang Starr’s 1998 classic, Moment of Truth. Growing up in Taurean Washington’s household, the sounds of Hip Hop and R&B were a constant. As the burgeoning Maryland-based artist got older, he began to pay attention to the intricacies of the lyrics and truly studied the craft.

“My love of Hip Hop started when my father played me Moment of Truth by Gang Starr,” Washington tells HipHopDX. “His favorite track of that song was ‘The Militia.’ But ‘You Know My Steez’ did it for me. Then it led to the Nas, JAY-Z, Biggie, et cetera.”

In 2008, Washington began to entertain the idea of being a Hip Hop artist — only in visual form. He wanted to use his art as a way to express his love for the culture. Eleven years later, he’s leading the “Art-Hop” movement.

“It struck me to combine art and Hip Hop, coining the phrase ‘Art-Hop,'” he says. “I see myself as a visual lyricist. My paintbrush is the microphone, my lyrics are the image/composition and the beat is the color.”

I'm excited for my "visual album" to drop! It's been a tall order interpreting an album by @kendricklamar but I did it. This picture was a photo taken for a feature article from @out40blog thank you KiKi! But November 10th is the date! #topimpabutterfly is one of the best albums of all time! #kendricklamar #TDE #complexionazululove #section80 #damn #africa #colorism #complexion #blackhistory #americanhistory #artbytaurean #hocoarts #hocoart #modernart #contemporaryart #DC #VA #MD #dmv #hiphop #rap #art #blackart #postblackart

Last October, Washington dedicated an entire art show to Kendrick Lamar’s magnum opus, To Pimp A Butterfly. He wasn’t prepared for what would follow. Shortly after his work was posted online, he got a follow from K. Dot’s label, Top Dawg Entertainment.

“I jumped up and down in my house,” he says with a laugh. “I was truly excited. They must have looked at my post where I showed my feature in the local newspaper for my exhibition based on Kendrick’s To Pimp a Butterfly. But for someone to be an up and comer that no one really knows, it showed me a sign of what’s to come.”

Love thyself (I) 2018- This piece is inspired by the song "I" off of Kendrick Lamar's album To Pimp A Butterfly. Shout out to @kendricklamar . I'm hoping that you are checking for these paintings. Ive been painting your whole album! #love #artbytaurean #hocoarts #hocoart #modernart #contemporaryart #kendricklamar #tde #topimpabutterfly #music #art #blacklivesmatter #tupac

Next month, Washington will unveil his latest works at his “Yeezus Taught Me” art show, an homage to Kanye West.

“To me, Kanye West is prolific and controversial at the same time,” he says. “Kanye’s Yeezus album epitomizes that idea. It’s very raw and brash. This was the album that was interesting to interpret and give a ‘visual rap’ to. I created 10 paintings, each an interpretation of a song off the album.

“During the show, I will have the actual album playing so people can catch the vibe and see where I received the inspiration for each piece. Typically, art receptions play either classical or jazzy music. For my shows, I want Hip Hop to be present and really make it a special experience.”

"Saint West"(2018) I'm going to let this new one marinate for a while. This is the first painting "single" off of my "Yeezus taught me" album. I can't wait to share what I have been working on! Shout out to @1cyhitheprynce and @kingpush . Tell Kanye I have something cooking for him in the art studio! February 2, 2019 at the Slayton House in Columbia MD from 1-330pm! I hope to see you there! #art #god #yeezus #kanye #kanyewest #kimye #hiphop #rap #modernart #goodmusic #contemporaryart #fineart #kimkardashian #music #hocoarts #hocoart #religion #jesus #christ #holyghost #americanhistory #bible #hocoarts #md #columbiamd #hoco2k18 #howardcountymd #dmv #dc #va

Following the Yeezus exhibition, Washington is planning two more shows in the immediate future. One will be dedicated to J. Cole’s KOD, while the other will pay tribute to JAY-Z’s 4:44 album. Ultimately, he wants to get his work in front of as many people as possible — and quit his day job.

“I would like to pursue my art full time and quit my 9 to 5, but I have to secure the bag first [laughs],” he says. “Also, I want to captivate the times as an artist and positively impact our society and pop culture. Overall, I would like for my work to reach the masses and jump off the Art-Hop movement.

“JAY-Z is talking about art in his raps now. Diddy purchased a Kerry James Marshall painting, breaking records at the auction. The art and hip-hop fusion is already taking place. I’m just giving it a name.”

The “Yeezus Taught Me” exhibition takes place on February 2 from 1 p.m. to 3:30 p.m. at the Slayton House in Columbia, Maryland.