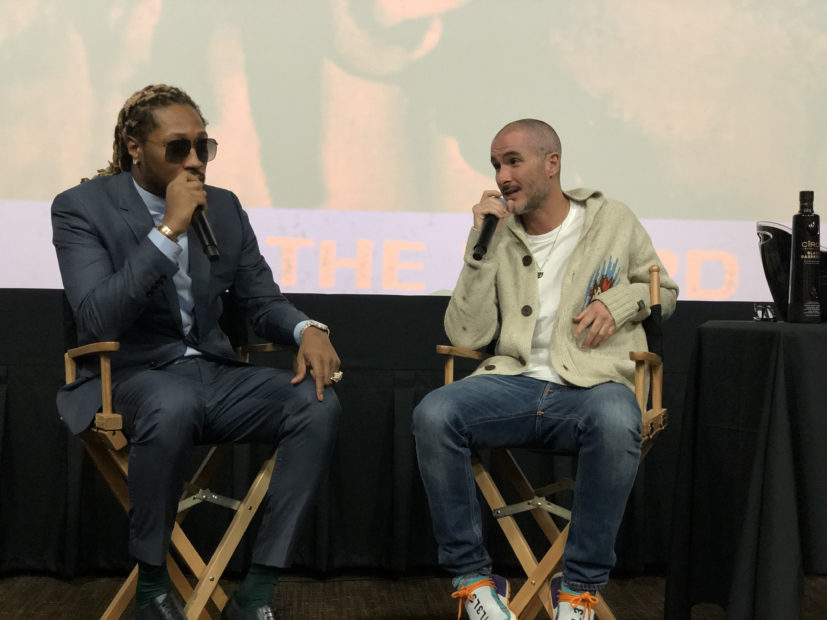 Los Angeles, CA – Future and Apple Music previewed his upcoming documentary The Wizrd for a select audience at the iPic Theater in Los Angeles on Tuesday evening (January 8). The doc, which shares a title with his upcoming seventh studio album, is scheduled to premiere on Friday (January 11).

Following an exclusive screening of the film, distinguished radio host Zane Lowe hosted an intimate Q&A and HipHopDX was front-and-center to witness it all.

The Wizrd is a rare and captivating display of Future’s insane work ethic and effervescent personality, as seen through footage compiled over the course of three years. It is something the Future Hive will thoroughly enjoy and also works as a great introduction to those curious about his cultural impact on many up-and-coming artists.

Rico Wade, Future’s cousin and a co-founder of the legendary Dungeon Family, appeared in the film along with Outkast’s Andre 3000, who essentially geeked out over Future’s music and artistic progression. 3 Stacks offered high praise to the Freebandz boss, who ran with the Dungeon Fam when he was rapping under the moniker of Meathead.

It's an evil world we live in… #THEWIZRD
The new @1future documentary film produced by @MassAppeal
debuts exclusively on @AppleMusic on January 11
??????

Beyond music, Future’s relationship with his kids — including his energetic 4-year-old son — is a big part of the film. During his conversation with Lowe, Future admitted he was apprehensive about spotlighting his private life but eventually caved in and allowed it.

Viewers also get to see the charming dynamic between Future and collaborator Young Thug. After viewing the doc, it’s not hard to understand why they are thicker than thieves.

Besides them both hailing from the ATL, the two share a love for luxury fashion and have tireless work ethics. The prolific artists also have a penchant for sitting down while they record, which is how “Mask Off” was made. It turned out to be the first time Future had ever recorded in that way.

As an artist who spends a lot of time in the studio churning out song after song, it’s believed that Future has thousands of cuts in the vault. He admits in the doc that he spent so much time in the studio that his late-engineer Seth Firkins, who passed away in 2017, became like blood to him.

Future heavily relied on Firkins to help pick out slaps for his mixtapes and albums. Now, he sits in the engineer’s old chair while he records to maintain an in-studio connection to his late friend.

“I’m sitting in Seth’s chair,” Future told Lowe. “I gotta sit in Seth’s chair. I still use his chargers for my phone and everything is always Seth. I haven’t gotten over it yet.”

When Lowe asked Future about his recording process, the rap star noted that Firkins’ influence still plays an intricate part in the creation of his music.

“The process is just the feeling and having people around you helping and giving their opinion just like the engineer and everyone around me,” he said. “Even though Seth passed away, it was engineers that was in the studio training [and] coming up under him that was learning from him, so it just feels right. With Seth, it was a personal thing more than just the records and recording process.”

Fans can watch Future’s The Wizrd documentary this Friday, exclusively on Apple Music.