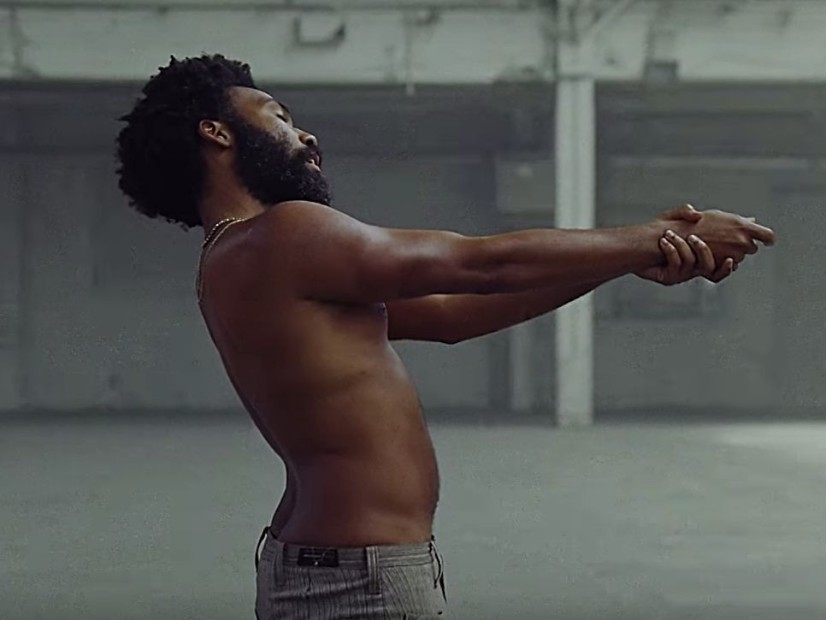 Childish Gambino Blows Everyone's Minds With "This Is America" Video

While Donald Glover’s Saturday Night Live episode was airing on Saturday (May 5), his musical alter-ego, Childish Gambino, released a powerful new video titled “This Is America.”

Directed by frequent Atlanta director Hiro Murai, the visual tackles gun violence in America and shows a shirtless Gambino nonchalantly blowing a person’s head off during the first few seconds of the video.

One of the most jarring moments comes when a choir is seen joyfully singing, oblivious to what is about to happen to them. Gambino marches in, still dancing along to the music, grabs a machine gun and sprays them down with bullets. Meanwhile, the other dancers in the video continue going about their business with smiles on their faces like nothing happened.

Towards the end of the video, SZA makes a cameo appearance as Gambino starts sprinting from an angry mob that’s chasing him.

Twitter exploded with positive reactions to the visual, many saying Glover is what Kanye West wishes he could be.

Donald Glover is too talented. It's overwhelming. #ThisIsAmerica

I can't remember the last time I watched a music video all the way to the end, let alone one five times in a row. Incredible work! #ThisIsAmerica

Donald Glover is one the greatest artists of his generation. Childish Gambino is an absolute genius.

Donald Glover’s “This is America” song and video is our reward for surviving Kanye West’s week of white supremacy.

Donald Glover has become what we wanted Kanye to be in 2018. #ThisISAmerica

So… Donald Glover/Childish Gambino can act, sing, rap, perform stand up comedy, and dance all at a professional level. Got it ✔️ #thisisamerica

Pretty sure we should all just quit and start letting @donaldglover make everything. #ThisIsAmerica

Donald Glover is just a way more talented, and far more versatile artist. We are so lucky to have him.

Childish Gambino – This Is Americahttps://t.co/YV0eSSzPUy

I’ll let you decide who the genius is here.