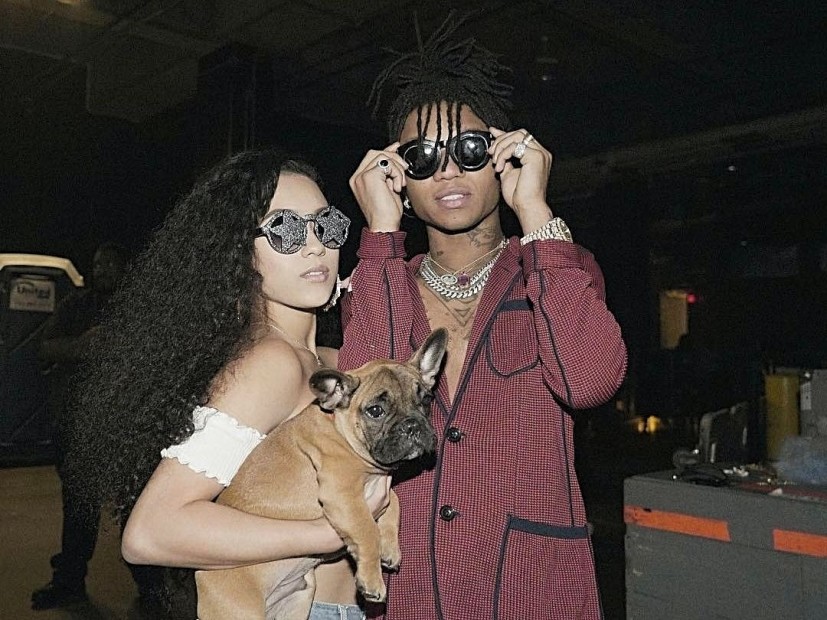 They say love is blind but in Swae Lee’s case, it’s led to blind rage.

On Saturday (April 7), the Rae Sremmurd rapper’s on again-off again girlfriend, Marliesia Ortiz, allegedly attacked a woman she believes is hooking up with him.

After kicking her on the ground, Ortiz then allegedly robs her. In a video clip of the incident, Ortiz can be heard screaming, “I got her purse. It’s mine.”

#swaelee alleged side chick #kbtate says his girl friend #marliesiaortiz and her home girls jumped her ☕️ #gossiptwins (SEE FOOTAGE OF THE FIGHTS ON THEGOSSIPTWINS.COM.. link in bio)

The alleged victim, who goes by kb_tate on Instagram, took to social media to air her frustration over the incident.

“All I want is for the harassing and stalking to FINALLY END!!” she wrote. “All I need is Justice!!!.”

ITS NOT FAIR. How do I deserve to be fearful for the safety of my friends EVERYTIME I want to enjoy a night out?!! I’ve been laying low on going out since November because of @marliesiaortiz and her friends. She’s threatened us and I have a few friends who DONT EVEN want to go out with me because they don’t want to get involved!! (I don’t blame them). This isn’t fair for me. I shouldn’t have to live my life this way. Ive jeopardized my Career, my image, my credibility, & my sanity. They are all just a bunch of bullies and they need to leave me tf alone! THIS IS SOOOO TRASHY I LOOK FUCKING PATHETIC. & BIG THANKS FOR ALL THIS!!!!! & i want her TO STOP PLAYING VICTIM IN THIS AND OWN UP FOR BEING OBSESSED OVER SWAE!!!!! Just grow tf up and stop lying on my name

Last month, Ortiz accused Lee of cheating on her with Blac Chyna and claimed she was done with him.

But as recently as Friday (April 6), Ortiz has been sharing photos of herself with the “Black Beatles” artist on her Instagram page.

Me and my nephew ?‍?@swaelee

A screenshot is forever but apparently loyalty isn’t, at least that’s what Swae Lee’s girlfriend has evidently discovered. According to a screenshot captured by DJ Akademiks, Marliesia Ortiz has accused the Rae Sremmurd rapper of cheating with Blac Chyna.

“You love sucking people niggas dicks huh? @blacchyna,” she wrote. “Y’all can have each other @swaelee.”

Over the past couple of days, Ortiz has posted several photos to Instagram that allude to a breakup. On Monday (March 5), she posted a photo of herself with the caption, “Boy bye.”

Lee also posted an Instagram Story of his own that pointed to some kind of emotional turmoil. “I should’ve saved my energy,” he wrote.

Lee and Ortiz, who have been appearing in photos together since at least February 2017, have already experienced a few bumps in the road. On Valentine’s Day, she allegedly poured chocolate syrup all over his Mercedes G-Wagon, which Lee documented on social media.

Meanwhile, the mother of Rob Kardashian and Tyga’s children, Blac Chyna, caused a media frenzy when she appeared in a leaked sex tape with a former boyfriend last month.