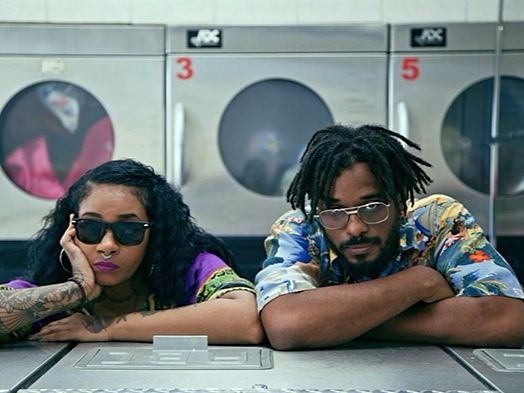 Jean Grae and Quelle Chris got married over the weekend, according to a few people who attended the ceremony.

Tanya Morgan member Donwill and comedian John Hodgman were among those sharing photos of the wedding on social media.

Thank you @jeffbarnosky for tipping me to the edit-out-the-portrait mode feature. Here are my loves in full focus. Happy wedding to them.

My friends got married yesterday and I didn’t take many photos. I wish I would have but I honestly don’t think I could have adequately captured how much love was in that room. (?: @la_nieta_x)

In March, the new husband and wife released a collaborative album titled Everything’s Fine on Mello Music Group. The couple have worked together often, but the LP was the first official project as a duo.

Grae and Chris got engaged in December 2017. The two have been referencing their wedding on Twitter in the days leading up to the ceremony.

There is no way that we are not both dead right now.
SPOILER:

The afterlife is the same, y’all. https://t.co/KShmkotphv

[This post has been updated. The following was originally published on December 3, 2017.]

It’s not every day that two talented Hip Hop artists get engaged, but love must have been in the air this weekend. On Sunday (December 3), Quelle Chris took to Twitter to announce he’d proposed to Jean Grae and she accepted.

“I just proposed to @JeanGreasy and she said yes!,” he wrote.

I just proposed to @JeanGreasy and she said yes!

The South Africa-born, Brooklyn-raised Grae, who rose to prominence in New York City’s underground Hip Hop scene, promptly returned the love with her response. She also mentioned there was a lack of pizza much to her dismay.

“*casually strolls into twitter* leaves twitter to continue our vacation,*” she wrote. “even though there was no pizza involved, I know you love pizza too. Love youuuuuu.”

?❤️even though there was no pizza involved, I️ know you love pizza too. ? Love youuuuuu

Grae’s last musical project was the 2016 EP, Sevvin, while Quelle Chris has been consisently releasing music with Mello Music Group, home to artists like Open Mike Eagle, Mr. Lif and Akrobatik (The Perceptionists), Oddisee and L’Orange.

His most recent album, Being You Is Great, I Wish You Could Be More, was released in February.

Together, Grae and Quelle posse’d up on the track “This Is What You Came For,” which they crafted for Marvel’s Black Panther in 2016, as well as their Goodnight Courtney multi-media project.

Several of their peers, including Mike Eagle, L’Orange and Busdriver, also took to Twitter to congratulate the couple.

Check out some of their reactions below.