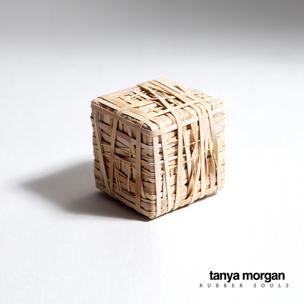 Tanya Morgan began as a novelty.

Their 2006 full-length debut, Moonlighting, fed into that storyline: A guy walks into a record store (remember those?) and asks about the song being played. He thinks it’s too vulgar and wants something cleaner. The record store clerk sells him a cassette of some act named Tanya Morgan.

The tape changes hands three times before it’s eventually sold back to the record store. Yet that’s the charm of Tanya Morgan: in an instant, the duo chides overdone Rap themes; the next, they can make fun of themselves without sounding gimmicky. On Rubber Souls, Tanya Morgan’s first album in four years, Von Pea and Donwill are no longer the scrappy upstarts looking for attention. Instead, they’re the grizzled veterans trying to assess their progress so far. Have they done enough to matter in the long run?

At times, they’re not sure. “They say I rock like it’s ’94,” Von Pea raps on “For Real,” Rubber Souls’ atmospheric opening track. “But I don’t know if that’s some kinda flaw.” “Is it worth it, yo?” a jaded Donwill asks moments later. “You ever wake up and wonder what it’s worth at all?” Clearly, Von and Don are tired of the rat race. They don’t like the current state of Hip Hop, but they love the genre too much to give up. Through it all, the emcees belabor the grind without wallowing in self-pity. Sure, they want wider recognition for their work, but they’re sticking to their guns regardless.

The album isn’t too heavy, though. We get the same comic relief we’ve come to expect on Tanya Morgan releases. “Ya aunt got a big ass Android phone,” Von claims at one point, “with my picture as her screensaver.” At the beginning of “More,” Von wants your kids to study instruments now so they can play his music some day (“we usin’ young bands so we can look hip ‘n’ shit … Von Isley”). “Never Too Much,” featuring Nitty Scott, MC, provides an optimistic jolt to the contemplative proceedings. Even the obligatory girl jawn—“All Em,” with its repurposed Tribe Called Quest lyric—fits well within the album’s nostalgic premise.

Sonically, the instrumentals are as vital as the lyrics they support; 6th Sense does a great job of setting the scene with spacey electro-funk (“Pick it Up”) and cascading drums (“Worldmade”). Elsewhere, he reaches for other genres: just when you think “The Day I” is over, 6th Sense adds gentile piano keys and soothing strings to the mix, establishing an unexpectedly classical blend. It all adds up to one impressive album, especially since the group’s been in flux the past couple years. Rapper Ilyas, a member of Tanya Morgan for its first two LPs, left the crew in 2011. During that time, it was unclear if Rubber Souls would even come out. This is a valiant comeback and solid mission statement. They’ve done great things after all.