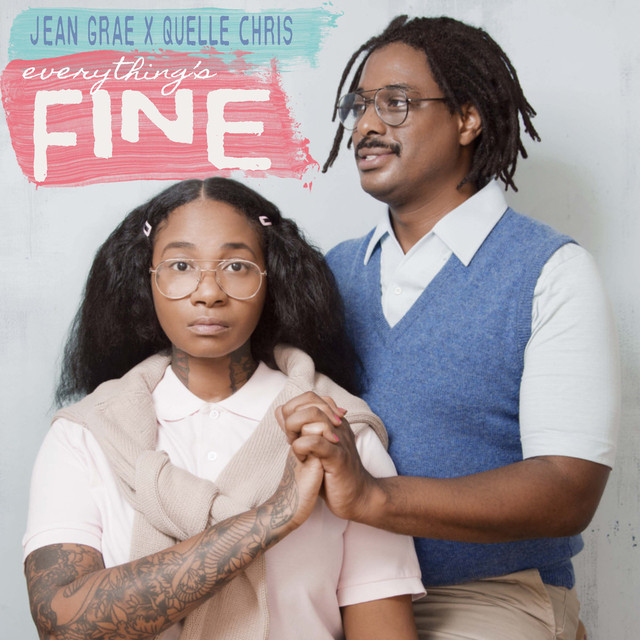 “Everything’s fine.” It’s what people tell a casual acquaintance in the midst of personal or professional turmoil. Everyone puts on a mask, to some degree, to get through a rough day (or days). This reality of life is the basis of Jean Grae and Quelle Chris’ Everything’s Fine album.

The longtime collaborators and soon-to-be-married couple completely shatter this facade on their new LP, challenging it with a mix of satire and biting commentary. They even use some comedy pros to aid in shaping the album’s sardonic attitude.

Hannibal Buress — the man who famously put Bill Cosby on blast over sexual assault allegations — appears early on in the album to spit a ridiculous verse. Later, they employ a hook based around the “Cosby tried to buy NBC” conspiracy. The audaciousness makes it all the better.

The epitome of the duo’s wit is heard on “My Contribution To This Scam.” The opening salvo mocks everything from the music industry and social media vanity to disingenuous hipsters and YouTube vloggers.

Lyrically, each artist brings something different to the table and plays off the other’s strengths. Chris relies on being more direct while Grae’s wordplay is flashier. This dynamic results in her delivering many of the most dazzling rhymes.

“Zero,” for instance, features one of the finest verses in her entire career, unleashing a barrage of jaw-dropping bars to kick off the track.

In addition to the rhyming gymnastics, there’s also plenty of raw and honest reflections. The emotional toll of America’s lack of respect for black life and constant police shootings is palpable on “Breakfast Of Champions.” Grae’s closing verse perfectly lays out the draining actuality of never seeing justice get served.

“I need veteran racists off pay, and in jail, but the bastards seem to linger some chemtrails/As children calm their mamas while they stare at daddy’s entrails,” she raps.

Everything’s Fine is a tandem effort on the production end too, though Chris handles most of the beatmaking duties. His boom bap sensibilities are a constant presence thanks to drum patterns straight out the basement, but there are plenty of twists and turns for sonic diversity.

On “House Call,” Chris’ soundscape evolves into modern-day P-Funk, adding to the Parliament-Funkadelic vibes with Anna Wise and Jonathan Hoard’s disparate vocals. Grae’s production credits, such as the intro and “River,” are easy to recognize due to more relaxed tones.

Although Everything’s Fine is well-crafted from front to back, there are a few hiccups. The most glaring is “Doing Better Than Ever,” a jarring solo cut from Das Racist’s Ashok Kondabolu. The overlayered vocals and spoken word style get old quick, begging for the return of Grae and Chris. A handful of tracks also drag to a conclusion and could benefit from some trimming.

Despite the duo’s general dismay for what’s going on in the world, there is a sense of hope on Everything’s Fine. “Waiting on the Moon,” in particular, is downright inspirational. Even in the face of depressing circumstances, Grae and Chris still see a light at the end of the tunnel and appreciate the good in their lives. Everything’s not fine, but the future husband and wife know the bright moments are worth enjoying.