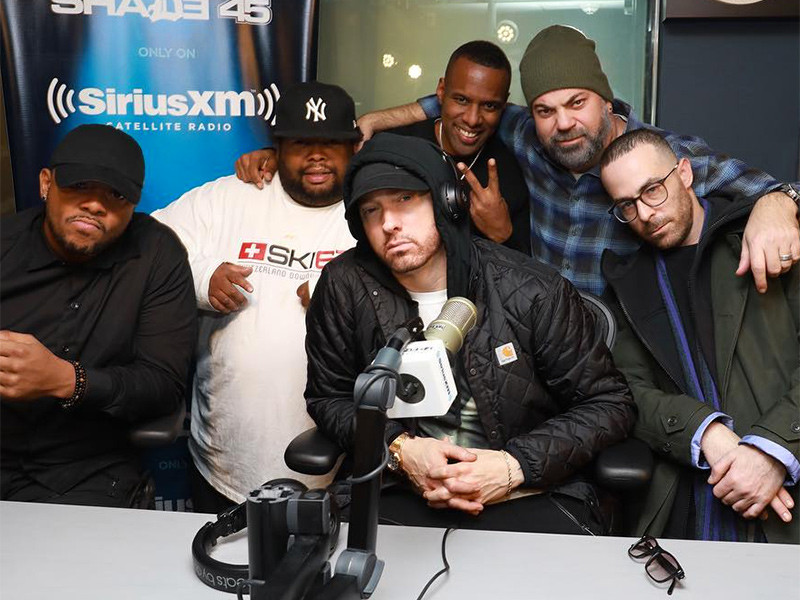 New York, NY – Although Eminem’s highly anticipated album, Revival, didn’t drop on November 17 as his fans were anticipating, Slim Shady did stop by the Shade 45 studios on Friday (November 17) to chop it up with DJ Whoo Kid and Lord Sear.

Throughout the conversation, which also included producer Alchemist, manager Paul Rosenberg and fellow D12 rapper Mr. Porter, Em discussed everything from the current state of Hip Hop to working with Beyoncé on “Walk On Water,” Revival‘s first single.

When Em’s BET Hip Hop Awards appearance was brought up, he expressed similar feelings about Donald Trump that he did in the brutal freestyle he delivered in a video during the show, but also seemed genuinely disappointed that the POTUS hasn’t retaliated yet.

“I was and still am extremely angry,” Em says. “I can’t stand that mother fucker. I feel like he’s not paying attention to me. I was kind of waiting for him to say something and for some reason, he didn’t say anything.”

The Detroit rap giant also talked about what made Beyoncé the ideal choice for “Walk On Water.” Her megastar status in the music industry was something Em took into consideration.

“First of all, Beyoncé is amazing,” he says. “And, it’s been on my wish list for a long time, but I never really had a song that I felt like would be right to present to her. So, I was kinda waitin’, and then me and Paul kicked the idea around after I finished it, you know. And based off what it was about, I felt like she probably could relate to this, too.

“Just because Beyoncé’s always … everything she does is so perfect,” he continues. “But, the pressures behind that to…for her to do it so perfect, you know, I felt like she could probably relate to that. ‘Cause I told her, I said, ‘I never seen you make a mistake before, ever’. Like, performance-wise, everything. Every song she puts out, every album, it’s so calculated and precise. And everything’s always so perfect.”

As Hip Hop fans wait on Shady’s ninth studio album, it sounds like Em is just as hungry for solid Hip Hop. In an interesting side conversation with himself, he commented on the current state of Hip Hop. He’s asked, “Is Eminem aware of all the other songs that’s out there, the way Hip Hop is going, and all the weirdness?”

“He is, he is,” Em responds. “He listens. He does. There’s some stuff that he really likes and thinks it’s really, really good. I gotta ask him again. ‘Yo, what the fuck you think about this shit? What do you think about Hip Hop right now? Hip Hop’s good. I like Hip Hop. Ok cool.'”

“Nah, it’s great,” he adds. “Watching how some of us were able to watch Hip Hop in its infancy stages, and watch it grow and go from Run-DMC to LL [Cool J] to Beastie Boys to Big Daddy Kane, Kool G Rap, Rakim — just all the transformations that it’s gone through, to come to this day and age right now, and the sound and the way people are playing with flows and shit like that, I can certainly appreciate it. I try to stay up on everything that’s out.”