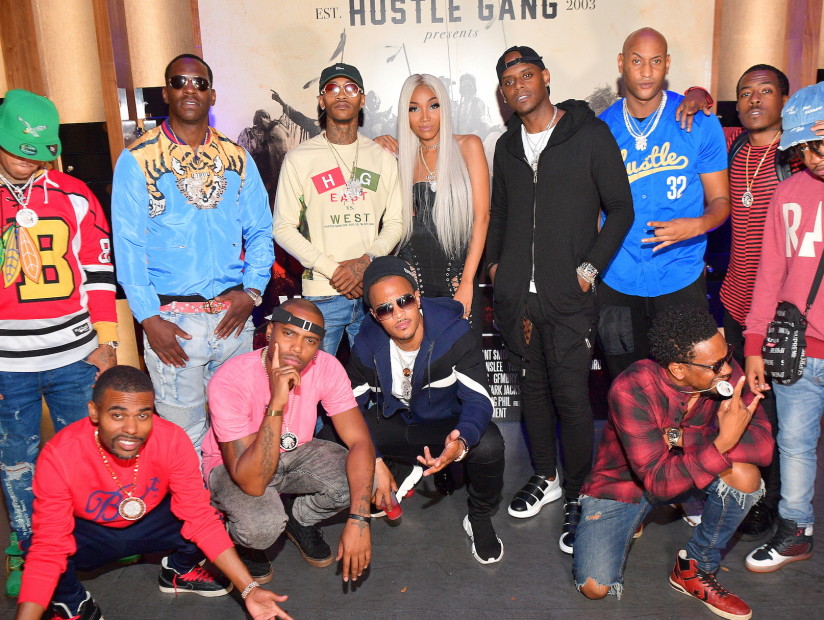 Southern Hip Hop has maintained its foothold on the rap industry’s neck since the dawn of the new millennium. With the exception of artists like Curren$y, Scarface, Ludacris, and The Dungeon Family, many rap fans have pigeonholed the South for its booty, crunk, crunk, snap, and trap movements and the lack of depth in its rappers’ lyrical content. But since the emergence of Atlanta’s T.I. on his superstar-solidifying opus Trap Muzik in 2003, he’s relentlessly shelled out countless solo and collaborative classics that consist of sophisticated, gangsta, and turn-up content with his sleek, nuanced cadences as one of the greatest MCs ever.

As the King of the South, T.I. has brought his imprint Grand Hustle to the forefront of Hip Hop with an attuned scope of brand marketing and acquiring the Dirty’s best talent for 14 consecutive years. His star-studded roster has included B.o.B., Young Dro, DJ Drama, Iggy Azalea, Houston legend and newly appointed Grand Hustle vice president Trae The Truth, and Travis $cott to name a few past and current success stories. Now with the label new crop of talented lyricists such as London Jae, Translee, Yung Booke, RaRa, Brandon Rossi, 5ive Mics, Tokyo Jetz, they are looking to be rap’s top rookie camp under T.I.’s lead on their latest album, We Want Smoke.

We spoke to Tip and his Hustle Gang comrades during A3C 2017 about their Lyor Cohen-esque “ask the logo” mantra to ensure quality and diversity with their Chief insignia-branded releases, why T.I. stands by his statement that he created trap music, and why Hustle Gang doesn’t look to be celebrated for their work in the community.

HipHopDX: The album Trap Muzik came out in 2003. Now pop singers like Kelly Clarkson and Taylor Swift are singing over productions that have remnants of trap beats. Do you think that the trap music bubble has burst now that has transcended Hip Hop? I ask you, Tip, being that you said earlier this year that you created trap music.

Hustle Gang: Yeah, he did.

T.I: Wait a minute, I don’t want it to be hearsay like I’m speculating or proclaiming this personally. I want you to tell me when did you first hear the words “trap music” put together before Trap Muzik dropped?

DX: I’m from Connecticut where boom-bap production was more prevalent back then, so I wasn’t familiar with the term.

T.I: It doesn’t matter where you’re from. Facts are facts.

DX: The first time I honestly heard it was when you’re album Trap Muzik came out.

T.I: Okay, so that factually can show, and we can go back historically and check actual references that before that album dropped, the term didn’t exist. So, you don’t have to say “Well, you say you created it.” So tell me, who created “trap music” first before me? It’s okay to say it.

DX: You were the first that I heard use the term “trap music.”

T.I: Nah, that ain’t what I said. Just answer the question.

T.I: Now don’t that feel so much better? You don’t have to step around it and tip-toe. Just say it how it is. But it has grown from the contributions of others who have taken it far beyond where I left it or where I could have taken it. It has expanded so much, so wide, and so broad that at this point you just have to sit back and watch and just be proud. As long as it’s people who come from that walk of life who could look to the charts and feel like there are hit records out there right now that represent them and their lifestyle, and talk about how they live every day, I feel like trap music is very much alive.

DX: For the fans who haven’t heard We Want Smoke yet, what should they expect to hear on this album?

T.I: See that’s the thing about it, trap music you can put that to Tip, but this is so much bigger than Tip. It’s so much more diverse than Tip, we got so many other guys and girl, and that’s the wonderful thing about it. It doesn’t sound like a Tip album. It’s so much different and so many slices of life to choose from.

DX: We Want Smoke dropped one week after a decriminalization bill was passed by Atlanta’s lawmakers. Do you think this will help lower arrests for weed possession and that medical marijuana dispensaries are long overdue in Atlanta?

T.I: Before you can give dispensary licenses you have to legalize recreational or least medicinal marijuana use. I think this is the first step, the decriminalization of it. And I think that a lot of people went to jail or prison unnecessarily for, you know, user amounts of weed. So, I think that’s a step in the right direction.

T.I: Yeah, you can do it as long as you walk around with 27 grams and not worry about going to jail, so that’s pretty good.

T.I: Under a zip you get a ticket.

DX: The intro to “Trap Back Jumpin” in 2012, Tip, you mentioned how you learned to read at age 3, and how you should’ve used your brain power to become a president or politician. Are we seeing that come intro fruition as you led a recent protest to boycott Houston’s restaurant in Atlanta or your political short film for Us Or Else?

T.I: I do value my presence as a voice in the community, but I have no interest in being a politician, ya dig? I wouldn’t give who I’m running against the satisfaction of being able to pull all of the bullshit that I’ve been in and run slanderous campaigns against me. That shit would be too easy. I just really want to give a speak for the people and be a voice for the voiceless and stand up for what’s right.

DX: Trae, one of my favorite songs on your latest album The Truth, Part 3 is “Still Out Here” featuring RaRa. Where you speaking about the situation in 2012 when you were shot in the shoulder outside of Scores Cabaret in Houston and what you posted earlier this year on Instagram with that bullet finally pushed out of your arm?

DX: Many rappers and Hip Hop luminaries are now getting keys to their native cities like Killer Mike in Atlanta, or having holidays celebrated in their honor and namesake like Trae Day in Houston, Sway Day or Hiero Day in Oakland to name a few. Do you plan on working with Atlanta’s next mayor?

T.I: We’re not interested in any self-gratuitous vanity or recognition. If we can provide a service to the community that isn’t presently being provided, fill a void, or answer the call or the need of others, if we can do that we will. But we’re not here to be recognized in that “hey guys, celebrate me!” That ain’t what this is about, you know what I mean? Trae got “Trae Day” not because he wanted a “Trae Day, but because he had been doing so much work that was so significant that demanded the recognition from the mayor and the community so much that they saw fit. That ain’t what he asked for or expected. That was due to the work that they saw fit in what he was presently doing. That’s how I feel. I think I speak for the group in that what we do, we do from the heart. It ain’t about being on the camera. It’s about us coming from the community and knowing the position of feeling like you’ve been left out of things that we need and don’t have. Now that we’re in a position, we want to try and be an answer to the things that we were missing when we were there. I think it’s just as simple as that.

DX: With the short films that Hustle Gang has been releasing, is this a branding tool to make some of the Hustle Gang into actors beyond recording artists similar to yourself, Tip?

T.I: Absolutely, because I’m around some clowns for real, man. They’re fit for TV, and 5ive Mics…

T.I: 5ive Mics looks like a potential robber in the All Eyez On Me movie, and when you see the credits, you see “potential robbers sitting on the pool table.” That’s 5ive Mics, that was his character (Laughs). I think all of us have the potential to do great things. And you just finished shooting a movie, Trae. What’s the movie you just shot about?

Trae The Truth: It was me, Mozzy, and we’re waiting on Tip to do his part, just some street shit.

Young Dro: Yeah, y’all gonna check my movie out, too, with Trick Trick. It’s called Trap. And with Denzel in there, too.

DX: With all these solo albums being released on Grand Hustle such as Tokyo Jetz’s Viral, London Jae’s 10 Summers, RaRa’s The Elephant In The Trap, Young Dro’s Day Three, and other’s from Yung Booke and Translee, and Tip has The Dime Trap coming out soon. are you trying to make this the strongest fourth quarter ever for the label?

T.I: Not all of them. We Want Smoke is out, and then Translee is coming out on November 27th, and Booke is October 27th, and you can wait until December 18th for mine. Just know that whenever you see The Chief [logo] on the project, it’s gonna be absolute pandemonium. It gonna go hamburger.

DX: Atlanta’s real estate market is booming. You think Hustle Gang will venture into real estate to set an example for the black community to “buy back the block” like Rick Ross said?

T.I: Hey, listen, the options are limitless to what we can do. We can do whatever we want to. First and foremost, you create opportunity. With that opportunity, you create profits to be a result of it. Some people will decide to be in real estate, and some people will decide to get in technology. Other people may decide to spend their money in film and television. Others may decide to spend it to do fashion. Diversification of one’s portfolio is left entirely up to the individual. Now is it possible? Absolutely, it’s possible. Will I be spending my money on real estate because I know what’s going on in the market? Absolutely. And these gentlemen, and lady are welcome to put their coins to the sidelines and we can all profit together. But I don’t just want to say, [mocking voice] “Yeah that’s what do over here at Hustle Gang. We all take our money and…” Some of us may go off and trick our money out to go buy some jewelry and go off in the strip clubs — 5ive Mics! — you know what I’m saying?

DX: So the album represents the layers to peel back about of each Hustle Gang member’s approach to making their music?

T.I: That’s what makes us great, though. The diversity and the multifaceted nature of how we all come together in all sorts and types of different ways. You get a little ignorance, you get a little consciousness, get a little sauce, get a little drip — a big drip — and when it comes together, that’s what The Chief represents, diversity.