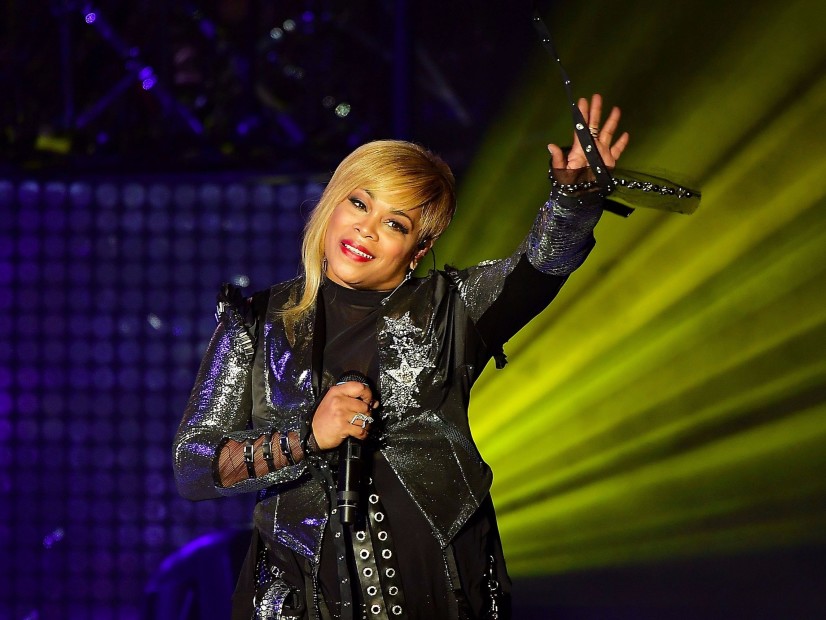 Hollywood, CA – After T-Boz’s cousin Eddie Russell Jr. was killed by police in Peoria, Illinois on September 20, the TLC vet revealed that Russell’s mother is suing the Peoria Police Department. She also denied there was any kind of standoff as police have stated.

“My cousin Anita Johnson, his mother, is going to sue to Peoria Police Department and she should,” T-Boz told TMZ. “It’s unjust. The crime doesn’t fit the punishment. The fact that people can actually murder people and still walk out with the cops. This child had a non-violent record, never hurt anyone ever in his life. He was mentally ill. The police aren’t equipped to deal with mentally ill patients. They didn’t wait for the person to show up and come.”

She continued, “Somebody’s life was taken, but 18 times? No one deserves that. It wasn’t a standoff. He didn’t come out shooting. Even if he had a gun, he didn’t murder nobody.”

(The original version of this article was published on September 26, 2017 and can be found below.)

TLC’s Tionne “T-Boz” Watkins is grieving the sudden loss of her cousin Eddie Russell Jr. after he was fatally shot by police last Wednesday (September 20) in Peoria, Illinois.

“My Cousin Was Shot 18 Times Including the Face and Back of His Head!,” she wrote. “He Harmed NO ONE EVER! He Had Mental Health Issues AND THE COPS KNEW THAT! Anything he’s ever Done Was minor and NON VIOLENT!”

My Cousin Was Shot 18 Times Including the Face and Back of His Head! He Harmed NO ONE EVER! He Had Mental Health Issues AND THE COPS KNEW THAT! Anything he's ever Done Was minor and NON VIOLENT! Eddie Russell Jr -A Human-Being -A Son- Brother-Friend-Nephew – Cousin-HUMAN! The cops told his mother to call him out on a bullhorn ? USED her saying "WE WILL GIVE HIM THE HELP HE NEEDS" and He Came Out Because He Heard His Mother and They used beyond excessive force to gun him down also with heavy artillery used in warfare! 18 times? Shot eighteen times??? IF THEIR GOING ON WHAT HES HOLDING AT THE BANK THAT ISN'T A GUN! (Picture Is Posted)They Keep saying he had a gun! I don't see a gun in his hand at the bank they say he tried to rob! That's NOT A GUN! They blocked everyone off including neighbors at a 4 block radius including his mother and father and family!People could NOT go home! So no camera phones accessible is that why? COPS DIDN'T HAVE ON BODY CAMS now isn't that convenient! They Lied and told family members Eddie Jr was at the hospital to get them away from the house knowing he was dead outside the house where they killed him! They kept his BODY OUTSIDE ON THE GROUND FOR MANY MANY HOURS! First they reported he ran out shooting =LIES! Then one cop shot =LIES! Then 5-6 shots =LIES! Then 5-6 cops shot YEAH CLEARLY! But why SO MANY TIMES? Why THE AR15? They didn't even wait for the negotiator to arrive or is it that the negotiator took his time getting there? They haven't Even Gave my cousin the RESPECT of trying to call and explain WHAT HAPPENED IN DETAIL TO HER CHILD! He needs JUSTICE! His Mother and Father and Family need JUSTICE!!!! This wasn't a hostage situation! He didn't threaten anyone's life! This was a mentally iLL young man who needed help and should have received just that! PLEASE HELP HIS MOTHER AND SPREAD HER STORY SO SHE CAN GET THE HELP SHE NEEDS AND JUSTICE FOR HER SON!!!! His Mother Has Tried For Many Years To Get Her Son Mental Health Counseling He Needed! The system Failed Him and Her! #AmericaIsTainted #TrumpIsAChump #TakeAKnee #BendAKnee #JusticeForEddieJr #Shot18Times #tboz #tlc #tbeezy #tlcarmy #justice #peoriaillinois #EddieRussell

According to Peoria Journal Star, the 25-year-old man was a suspect in a bank robbery. When police tracked Russell Jr. down at his home, he was reportedly shot 18 times after an hours-long standoff.

Peoria police said Russell Jr. came towards them with a handgun, forcing them to fire. Russell Jr. was pronounced dead at the scene by County Coroner Jamie Harwood.

Russell Jr. had reportedly just been released from a mental health facility before he was killed. His father, Eddie Russell, Sr., had asked police to let him inside to talk to his son and they told him “trust us.”

In her post, T-Boz is adamant Russell Jr. didn’t have a gun in the alleged bank robbery at First Mid-Illinois Bank & Trust.

“The cops told his mother to call him out on a bullhorn USED her saying “WE WILL GIVE HIM THE HELP HE NEEDS,” she wrote. “and He Came Out Because He Heard His Mother and They used beyond excessive force to gun him down also with heavy artillery used in warfare! 18 times? Shot eighteen times??? IF THEIR GOING ON WHAT HES HOLDING AT THE BANK THAT ISN’T A GUN!”

“It was unjustified, it was excessive force, and the family demands answers and a full investigation,” Stroth reportedly said Tuesday (September 26) during a lunchtime news conference at the Peoria Police Department.”

He continued, “The family demands reform, and the family demands justice. We want to make sure that the city of Peoria and the Peoria Police Department and the Illinois State Police do a full and transparent investigation into what happened last week to Eddie Russell Jr.”