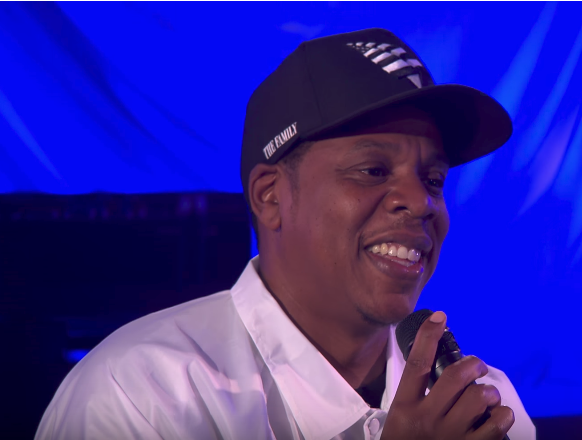 London, England – JAY-Z has remained fairly tight-lipped regarding the current political landscape of the United States and the polarizing presidency of Donald Trump. Jigga even declined to answer questions about POTUS during this year’s Sundance Film Festival in January.

However, during a recent interview with BBC Radio 1’s Clara Amfo while in the U.K., JAY-Z broke his silence. The acclaimed rapper was asked to comment on the current state of America in 2017, and admits that, despite all the issues going on, he remains optimistic for the future.

“I believe that everything that happens in life is for your greatest good, and I don’t think that this is happening if we weren’t prepared to handle it,” he said. “I’m just looking forward to what’s next after that, because usually when things are darkest, then light is on its way. I’m not fearful.”

Despite not mentioning Donald Trump by name, JAY-Z did offer a few comments that were, make no mistake about it, aimed at the president.

“I believe that we are resilient, especially us as black people and especially the culture. We’ve been through so much more than this guy,” Jigga says. “This guy, I’m looking at him like, man, this is a joke, with all — I can’t even say with all due respect — with all disrespect. I just think he’s not a very sophisticated man, especially when it comes to the idea of until everyone is free, no one is free. Period. That’s just a fact. We are all linked some kind of way. So if you oppress a certain people, everyone is in danger, karmically and in real life. If I’m being oppressed and you have this big, nice mansion, I’m coming inside there. That’s gonna happen, that’s just how life is. So just on a practical level, that just makes sense. On a spiritual and karmic level, if we’re all children of God, then we’re all brothers and sisters, and at some point, if you’re doing that to your brother, then that can’t last.”

Later in the interview, JAY-Z spoke more broadly about the world of politics. He offered his dismay at the way in which certain politicians refuse to cross party lines on issues that concern real people, particularly the topic of prison reform, something about which he feels strongly. In an article he penned for TIME in June, JAY-Z spoke about the need to take on “the exploitative bail industry.”

“I don’t ever think I was politically astute, ever. I just care about people. I think politics is a divisive thing. I guess it’s in place so people can have checks and balances. You have one side versus another side. But what it does typically is it doesn’t work the way it was designed to work. It was designed to work so you could have one side Democrats to check Republicans. But it don’t really work that, because what happens is people vote along their party lines and they start talking to each other like, ‘I’m not going to cross the aisle,’ even though there’s people attached to these laws. I think they’ve forgotten that piece, that these things are going to affect real-life people. When you put in prison reform, people are going to jail. Families are being broke up and fathers are away from their children and the family structure is broken, so that kid grows up and that kid gets into trouble and he goes to jail and the cycle is vicious. I think we’ve forgotten that, as a government, that there are real people attached to these laws that you don’t want to vote on because you’re not a Democrat and you don’t want to go against your party.”

In addition to his interview, JAY-Z also performed two songs for Radio 1’s Live Lounge segment. The first, “Family Feud,” is from his recently released 4:44 album. Jigga reveals that, despite only recording the song two days before the album was scheduled to come out, he’s proud of it because of what it represents, not only in terms of his immediate family but also for the culture of Hip Hop.

“I’m proud of this song because it happens on so many levels that it also speaks to the culture,” he said. “Like us, working together and how we, when we’re working together, we’re more powerful. We have this thing in Hip Hop where it’s the older generation against the younger guys and it’s like, ‘Come on, man.’ That’s so divisive. We’re not gonna have power that way.’”

The second song JAY-Z performed was “Numb/Encore,” from his 2004 collaborative EP with Linkin Park. The touching performance was in honor of Chester Bennington, who died by suicide in July.

“That felt really special to me. That’s the first time I’ve performed that song after Chester passed away, which was super tragic. I really think that hopefully his death serves as a wake-up call. Mental health is a real thing. You never know what people are going through and you think because they’re performers and he’s sold fourteen thousand million records – that doesn’t equate to happiness. Money or fame, that doesn’t mean anything if you’re not happy inside. And a lot of people don’t deal with what’s happening to us. You just keep going. Especially for a performer like that. You just start numbing yourself. You become numb. He’s singing it. He’s telling you you become numb. You just got and get bigger audiences and you move further away from yourself. It’s tragic. I knew him well. He was a really nice person. He had like five kids. Hopefully his death wakes people up and a lot of people start taking care of themselves.”