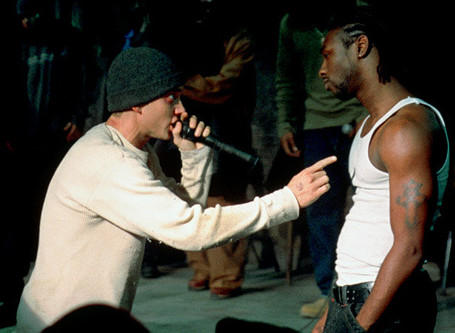 Toronto – Eminem will forever be connected to his battle rap roots. Whether he’s paying homage to the 90s underground scene that made him a legend (as portrayed in the semi-autobiographical blockbuster 8 Mile), his music, or signing little known, yet top-tier lyricists to his Shady Records imprint, the Hip Hop icon is giving the battle rap scene another a new look on the big screen.

According to The Tracking Board, music video impresario Joseph Kahn and Eminem are set to release a battle rap satire film Bodied later this year. The movie’s premise is to explore race relations. The production team is withholding many other details about the story at press time. The film is being shown at the Toronto International Film Festival next month.

You can see the Bodied trailer below.