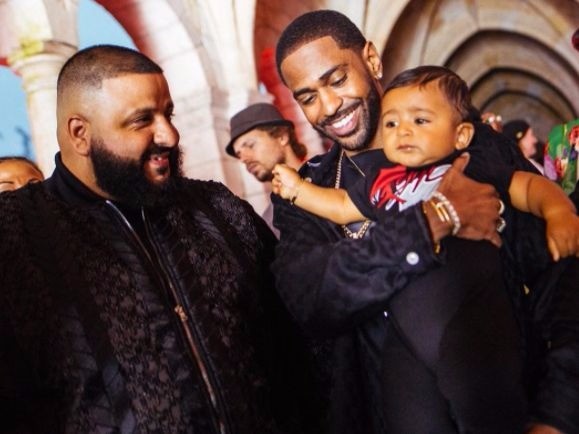 Is Big Sean Dissing Kendrick Lamar On DJ Khaled's "On Everything" Track?

DJ Khaled delivered his monster album, Grateful, at midnight on Friday (June 23), which features a song with Big Sean, Travis Scott and Rick Ross titled “On Everything.” The internet has evidently already had enough time with the 23-track project to surmise the I Decided. rapper could be throwing subliminal shots at Kendrick Lamar. Several Twitter users came to the conclusion that Sean’s verse is a response to alleged shots K. Dot fired at Sean on his critically acclaimed DAMN. album.

“Boy, I’m a Caesar, I see shit and seize it/ Roc-A-Fella chain, but you can still get Ethered/ Yeah, they don’t really fucking feel me man, but when you really run it they try and clip your Achilles/ I’m on track to a billi’, I got Khaled fuckin’ with me/ That mean I got the Holy Key and got the key to the city,” Sean spits.

My Brother @djkhaled's album Grateful drops in a few hours! also tonight at midnight (9:00 pt) "On Everything" video Khaled ft. Rick Ross, Travis Scott n Me. Asahd you outdid yourself!!! ??

Sean hasn’t mentioned anything about the allegation, but did write an Instagram post about the “On Everything” video. The possibility of the song being a diss track has spawned some hilarious posts from Hip Hop fans. Many believe Sean’s verse is one of the best this year while others warn Kendrick will “end” him. Only time will tell.

K. Dot Fans Listening to @BigSean On Everything ???? pic.twitter.com/UZiw0XQunk

"Rocafella chain but you can still get ETHER'D"? Big Sean got a ? verse #GRATEFUL ON EVERYTHING ISSA HIT. pic.twitter.com/lgrtTLZtDg

I'm praying that big Sean wasn't sending shots to Kendrick on this everything track. Its fire af…..but Kendrick will end you. No joke

Aye uhmm I know you heard that "On Everything" Man Big Sean just threw some heat at Kendrick fr fr? I know Kendrick in the lab right now!!!?

Big Sean bodied that "On Everything" record…..On everything

Big Sean dissing Kendrick is like a mouse trying to run a fade on a lion.

Big Sean is at Kendrick’s NECK on khaled‘s album